-Submitted photo
Chris Cole is sworn in as the new chief of police for the Storm Lake Police Department. Cole is a graduate of St. Edmond.

-Submitted photo
Chris Cole, the new police chief for the Storm Lake Police Department, stands with his wife, Stacey Cole, who is the superintendent of schools in Storm Lake. 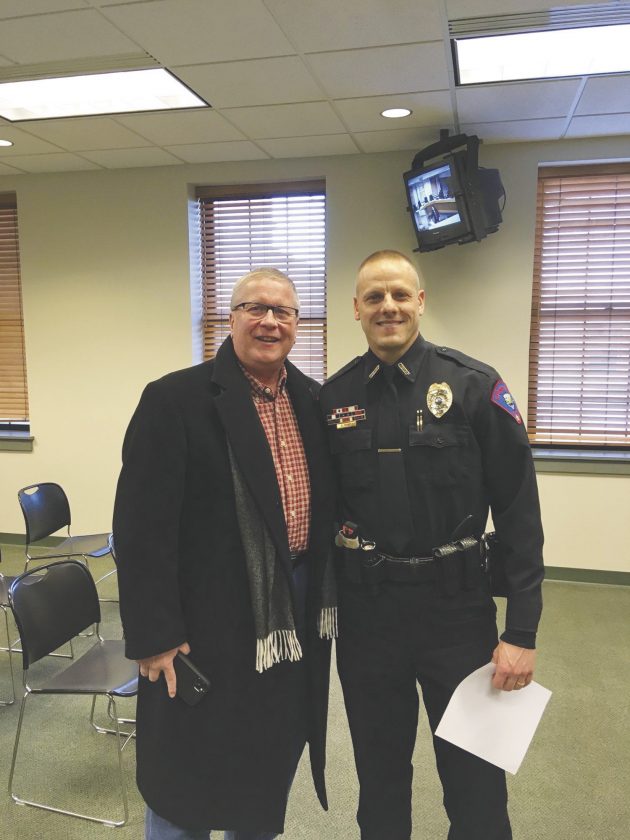 On Feb. 1, Cole — a 1992 St. Edmond graduate — will replace Prosser as police chief for the department.

“There were a lot of applicants when I applied, and I’m very grateful that Chief Prosser took a chance on me,” Cole said. “I was only 19 when I was hired. I was really lucky to get to work and learn from great supervisors.”

Cole would later go on to earn degrees from both Iowa Central Community College and Bellevue University. He has held the position of police officer, detective, lieutenant and assistant chief during his time with the department.

The first stop on his career in law enforcement came in Dayton with the help of current officers Luke Fleener and Chris O’Brien of the Webster County Sheriff’s Office, along with Randy Steinkamp. 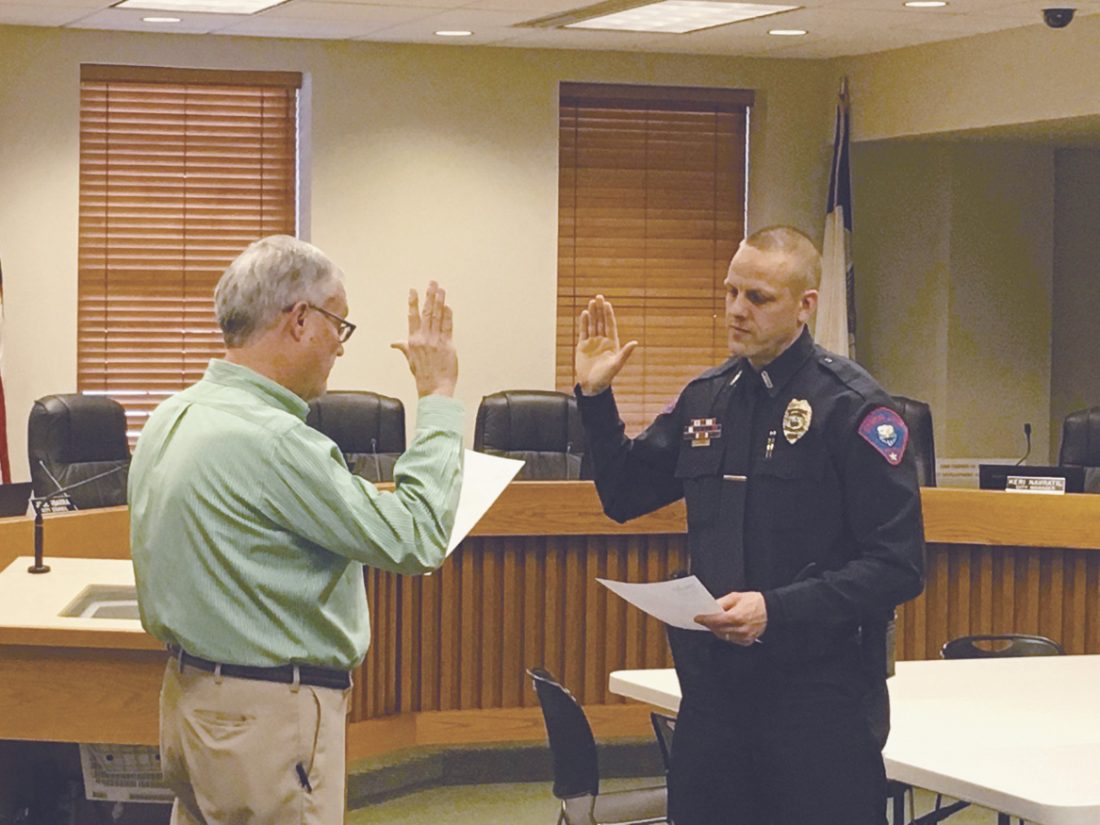 -Submitted photo
Chris Cole is sworn in as the new chief of police for the Storm Lake Police Department. Cole is a graduate of St. Edmond.

“When I was 16, I started working at Target,” Cole said. “During that time, I got to know Luke and Chris, who were both working there in loss prevention with Mark Gargano, the manager. Mark and I became good friends and he later hired me as a loss prevention agent.

“I was working there and going to Iowa Central to study criminal justice. Luke, Chris and Randy helped me get hired as a part-time officer in Dayton, which is where Luke and Chris both started their careers. They thought it would be a good pathway to get into the police academy.

“I worked in Dayton on weekends and went to school during the week, still working at Target in between classes. I eventually had to drop out of college to attend the police academy in 1994 and I tested for both Storm Lake and Fort Dodge.”

Cole admits that he “really wanted to work in Fort Dodge,” but was offered the position in Storm Lake by Prosser first.

“FDPD called me about a week after I moved to Storm Lake and offered me a job, but I felt Storm Lake had taken a chance with me,” he said. “I felt it would be wrong to jump ship after they had purchased me all new gear and I’ve been here ever since.” 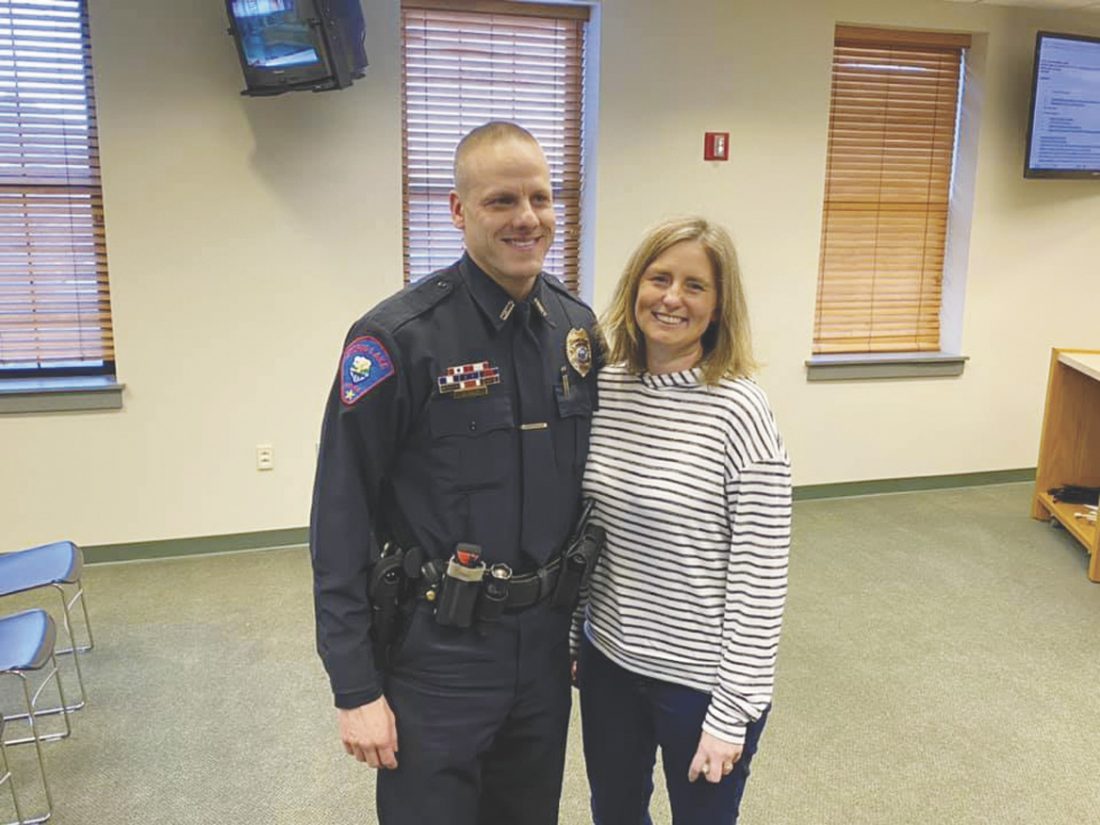 -Submitted photo
Chris Cole, the new police chief for the Storm Lake Police Department, stands with his wife, Stacey Cole, who is the superintendent of schools in Storm Lake.

Much like his time before joining the Storm Lake Police Department, Cole found an interest in police work at an early age.

“When I was about 13-or-14, my father, who was a big influence for me, started taking me pheasant hunting with a group of his friends,” Cole said. “Many of them were police officers, sheriff’s deputies and state troopers. Each year, our group would hunt together on opening day of pheasant season. It was around that time I began to form a bond with those guys and I began to consider a job in law enforcement.”

Like many other professional jobs, Cole has seen plenty of change in the two-plus decades of working in his field.

“Pretty much everything is paperless now,” he said. “We used to hand write everything when I first started. There is much better technology today. DNA, evidence car cameras, body cameras, facial recognition, computers, cell phones. Sometimes, those types of changes are hard for officers, but they are necessary for growth.”

With his first-hand experience on the department and years spent learning under Prosser and his fellow officers, Cole has some goals in mind for when he takes over in February.

“Internally I think it’s important to take care of the officers and staff,” he said. “The patrol division are the guys and gals that are tirelessly out there day and night keeping the city safe. I want to continue to support them so they have the training and equipment they need to effectively do the job and to do it safely.

“Externally, I would like to continue building relationships with community members. We want to ensure that all of our community members have a voice and feel safe. We as law enforcement can’t effectively do our jobs without help from the community. Community trust is very important.

“We build that trust through our community outreach and partnerships with people in the city. One of our goals is to connect with children at a young age. We want to humanize the badge so that more people know that we are here to help, not hinder. If we do it well, someday there will be an entire generation of people who value and respect police officers.”

Cole and his wife, Dr. Stacey Cole, live in Storm Lake. Dr. Cole is the superintendent of schools for Storm Lake and the former director of education services for Fort Dodge Community Schools. They have two children, Carson and Skylar.