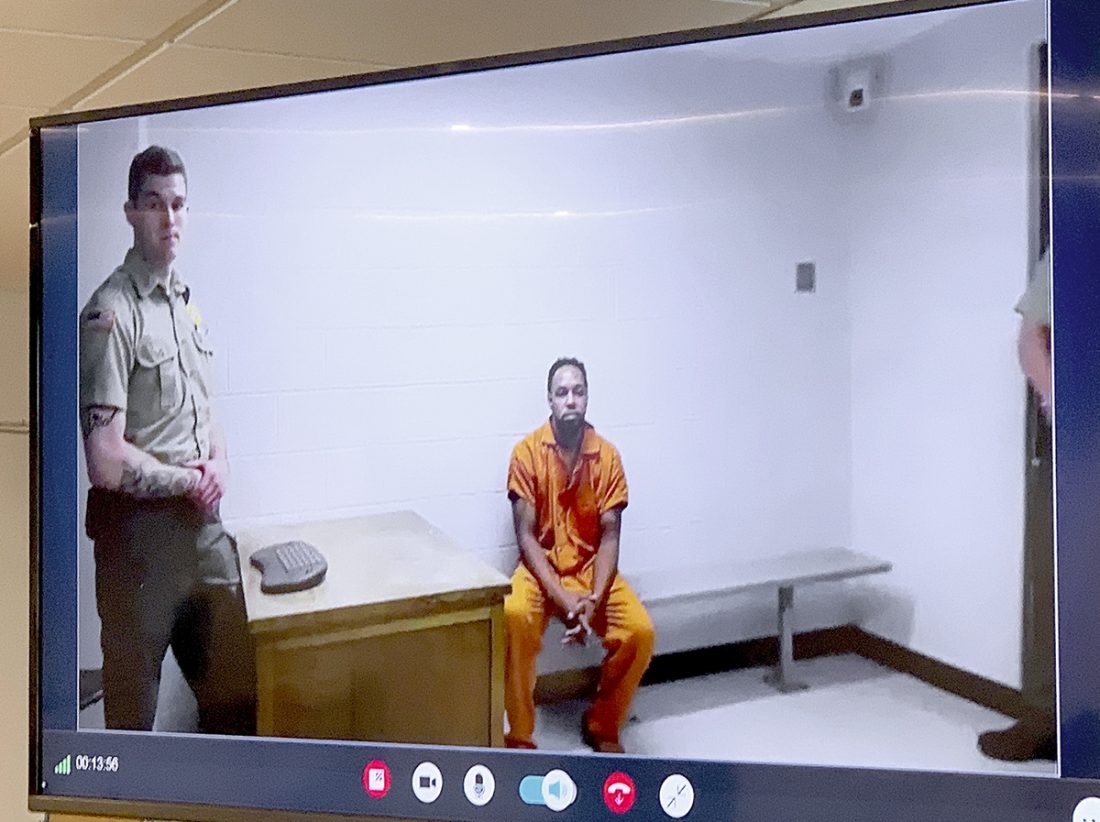 Mark Russell, 28, is charged with first-degree murder after McLeod, 45, was found dead in a North 14th Street home Monday. Bond for Russell was set at $5 million cash-only in Webster County Magistrate Court during his initial appearance Tuesday morning.

Graphic new details unveiled in the criminal complaint filed against Russell paint a picture of what police allege happened at the crime scene, corroborated by what they found and what they said Russell told them in interviews.

“I’m going to kill this b – – – -,” is what Russell said was going through his mind during the assault, according to the complaint.

The complaint says that officers found McLeod lying face down on a bedroom floor at the home with blood on the carpet near a golf club missing its head.

Though police initially identified the victim as the mother of the defendant’s girlfriend, Webster County First Assistant County Attorney Ryan Baldridge clarified in magistrate court that Russell and the victim’s daughter were no longer in a relationship at the time of the alleged offense.

Police said Monday that a preliminary investigation into the incident suggested an altercation between a man and woman, reported by a 911 caller, led to Russell allegedly striking the woman with an object from inside the residence.

According to police, the witness heard screams from outside the home stop after a period, as she was on the phone with 911 around approximately 9:14 a.m.

Police call logs indicate that an earlier call at 7:59 a.m. was also made in regards to an assault in progress at the same address. In response to an inquiry from The Messenger, Fort Dodge police released a statement detailing the officers’ response to the first call, which itself yielded no arrests.

“Based on the responding officer’s initial investigation, it was apparent that Mr. Russell and Ms. McLeod had been in an argument, but it was impossible for those officers to determine fault or who the initial aggressor was,” said Capt. Ryan Gruenberg in a statement released late Tuesday.

The statement said that prior to the second call over an hour later, police collected conflicting statements from both parties accusing one another of assault. Police said that no apparent signs of assault were observed at that time, other than redness around Russell’s neck, explained as a result of a third party attempting to defuse the tense situation.

Gruenberg said that officers were unable to draw a conclusion “based on necessary probable cause” as to who the initial aggressor was. Police say that after the first call, the parties agreed to work out their differences without a need for criminal charges.

“With no evidence of a physical assault and no third-party information, officers had no choice but to allow Mr. Russell and Ms. McLeod to carry on throughout their day with both parties agreeing to work past their differences,” the statement said.

Police reported finding Russell “hot and sweaty” as they arrived Monday morning after the call. As they detained Russell, the complaint says he told the lieutenant on the scene that “he was sorry for what he had done.”

According to the witness, Russell said to McLeod that she “wasn’t going to leave the bedroom alive” that day. She said that Russell had threatened to kill the victim before.

Russell allegedly told police that he tried to roll the victim over as she choked on her own blood because “he thought she was trying to get him in trouble by choking to death.”

Police said that during an interview with the defendant, he claimed responsibility for the injuries McLeod sustained before her death, saying that he struck McLeod at least three times with the golf club after what she said to him. He said that at least one of those strikes was in the face while she was on the ground.

A no contact order with the victim’s relatives, including a witness to the crime scene, was requested. Though such a request is typical in this type of case, Baldridge specifically asked the judge to enforce the order so as to prevent communication from the jail.

The Nevada Public Defender’s office, assigned Tuesday to represent Russell, requested withdrawal from the case due to “case overload,” telling the court that the state public defenders in Cerro Gordo County agreed to take on the case.

A preliminary hearing in the case is scheduled for Jan. 31.