-Messenger photo by Elijah Decious
Daryl Beall, one of the founders of Fort Dodge’s Urban Tribe, receives a birthday gift during their Tuesday dinner. Beall’s gift came with a card saying he was “a good egg.”

-Messenger photo by Elijah Decious
Mary Roberts, center, smiles at a recent memory from a field trip with Urban Tribe.

-Messenger photo by Elijah Decious
Photos of the Urban Tribe’s last field trip are passed around the table. Urban Tribe meets weekly for dinners, to watch movies, and to go on field trips around the state. 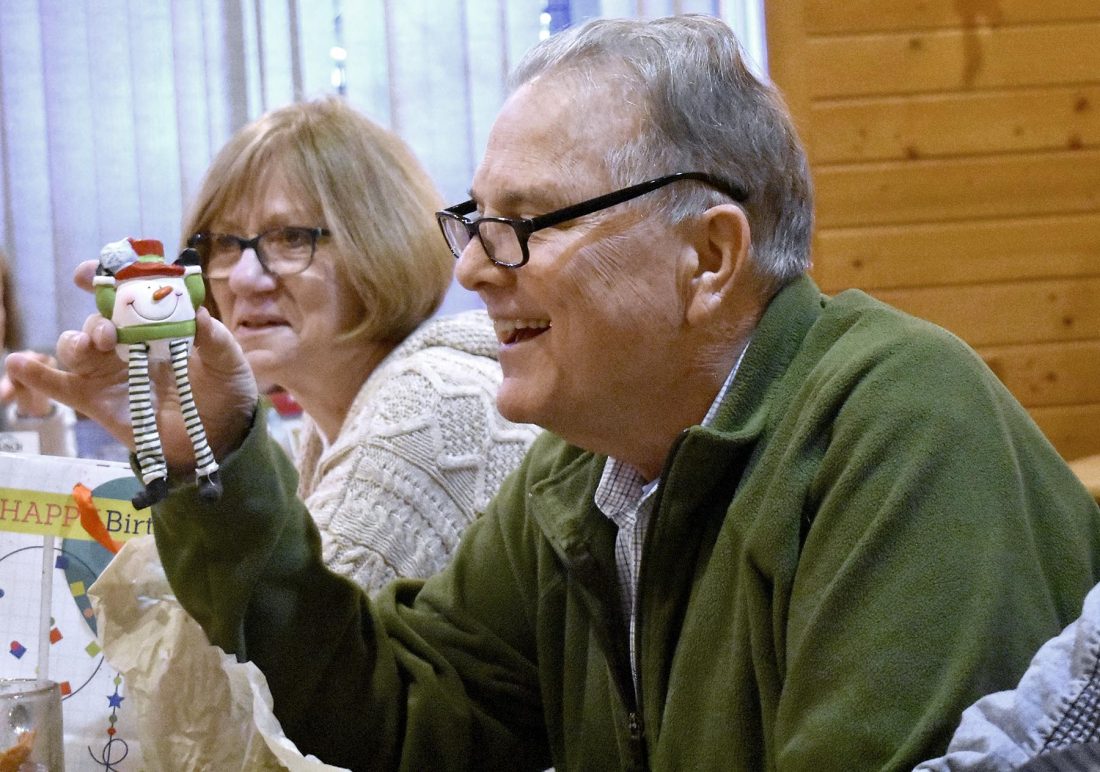 -Messenger photo by Elijah Decious
Daryl Beall, one of the founders of Fort Dodge’s Urban Tribe, receives a birthday gift during their Tuesday dinner. Beall’s gift came with a card saying he was “a good egg.”

As the Urban Tribe meets every week for dinner, you’ll notice something of an outlier compared to the average dinner table in America — both at restaurants and at home.

With a group of nearly 20, only one or two smartphones sat on the table. To the extent that those screens were picked up, they were only used to take photographs.

But even the photographs taken are physically printed out and shared. This week, group members saw the pictures of them getting on a bus decked out in Santa hats and festive holiday headbands at a recent outing.

Even though most of them are friends on Facebook, they meet with intention and regularity at least a couple times each week.

“I would’ve brought my phone, but the cord wasn’t long enough,” one of the members chimed in at the observation as they waited for their order at Community Tap & Pizza. 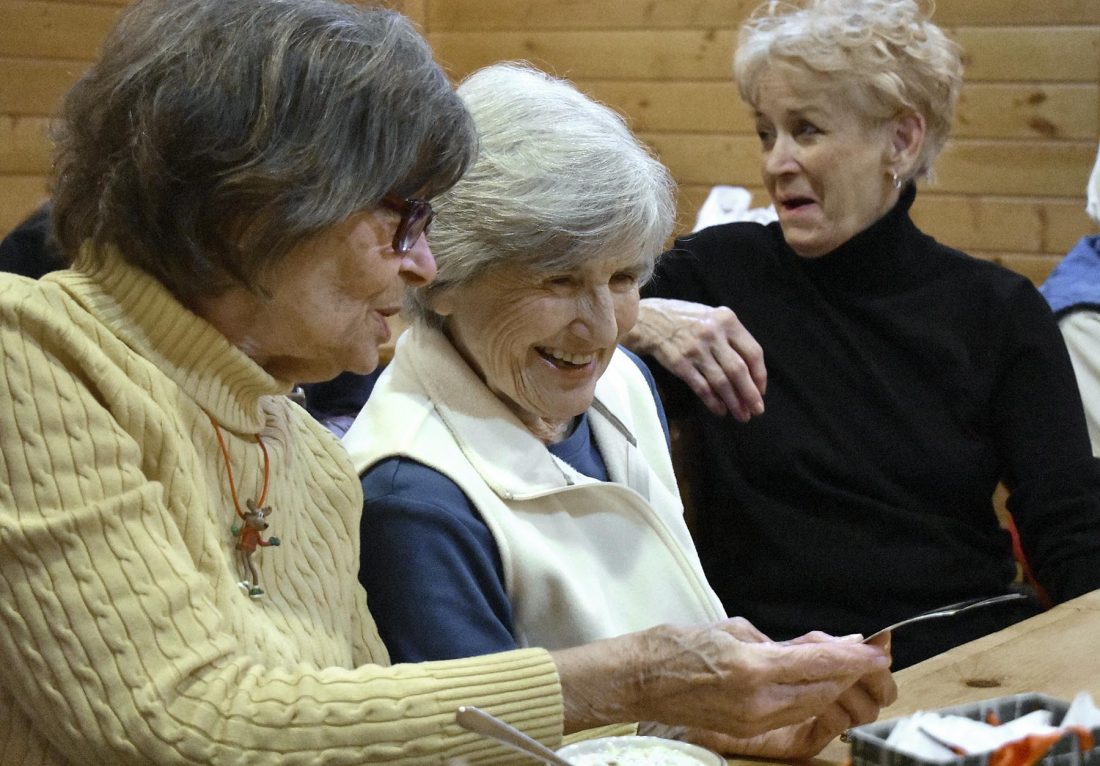 -Messenger photo by Elijah Decious
Mary Roberts, center, smiles at a recent memory from a field trip with Urban Tribe.

Tuesday night, it was evident that two members of the group were celebrating birthdays with a table filled with birthday wishes. They were actual cards — not text messages or obligatory posts to a Facebook wall — as well as gifts in bags, taking up a considerable amout of space.

Judging by their interactions, the gift wasn’t needed to make spirits bright that night.

The cards and gifts were, evidently, only accessories to enhance their camaraderie. Similarly, they find that technology merely enhances their social lives, rather than acting as a substantial replacement of them in person.

As they shared a meal, they realized that for all of them, social media was the side dish of their social lives — not the main course, as it were. They couldn’t imagine it any other way. 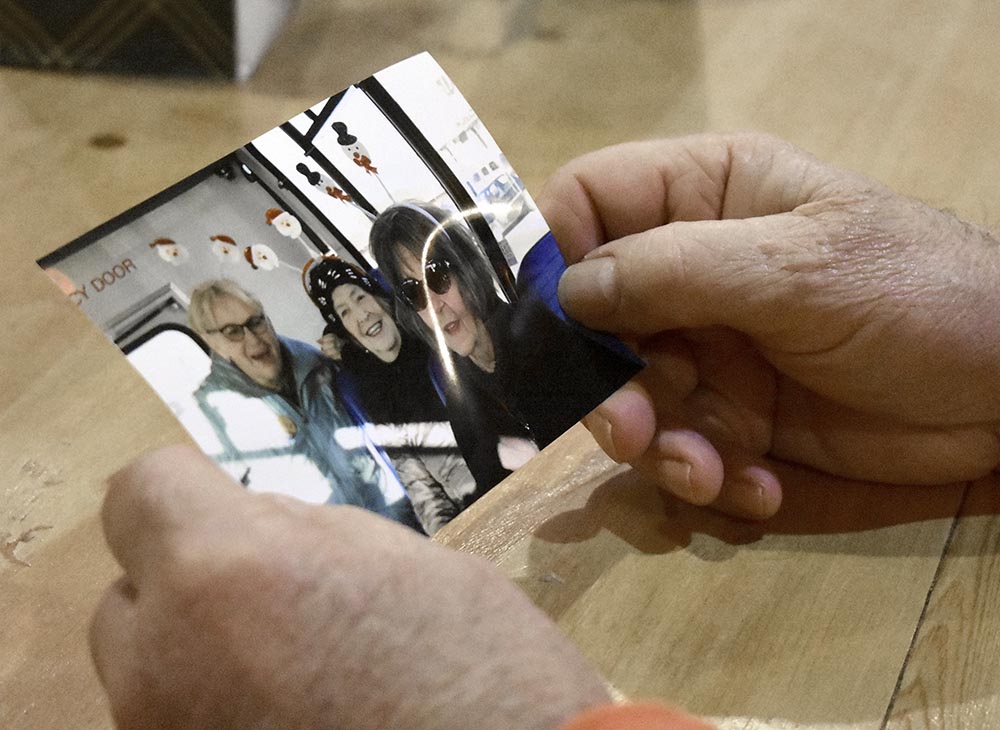 -Messenger photo by Elijah Decious
Photos of the Urban Tribe’s last field trip are passed around the table. Urban Tribe meets weekly for dinners, to watch movies, and to go on field trips around the state.

“There is not the kind of contact we used to have,” said Daryl Beall, one of the group’s founders. “People don’t just stop by the house like they used to,” for coffee or a spontaneous social visit.

Those things have gone the way of the handwritten note and card, he said.

“I’m told people don’t do that much anymore,” he noted.

The group, started by Beall and another current member, Ed O’Leary, began as a group of Messenger employees would go once a week to The Hay Loft, then across the street from The Messenger, for cheap burgers.

“It was the first non-career move I ever made,” Beall said.

As Beall ran for the Iowa Senate in 2002, the group evolved into a tight-knit group for his campaign operations, remaining politically active.

Since Beall lost his re-election bid in 2014, politics remained a glue for the group, even as they have grown to be more of a social group than political one.

Some members joke they lowered the standards enough to get into the open club, which used to have many more younger members.

“No matter who joins, we welcome them,” said 91-year-old Joanne Jenkins, a 12-year member of Urban Tribe.

To her, the friendships she has gained there are “everything.”

“Politics is a common interest because we all care about the state of the nation,” said member Kay Jensen.

But they’re more than politicos. In a society growing continually more polarized, they find that constant, in-person contact to be an antidote — at least in part — to the relentless nastiness that has become common fare in the news.

“The glue that holds us all together is that we’re empathetic to people near and far,” Jensen explained.

They’ve seen each other through sickness and health, burying some members along the way.

As social media makes it possible for folks to say things to people they’ve never met in a way they would never say in person, the in-real-life contact they have made a deliberate part of their friendships over the years has become somewhat of an anomaly.

For their grandchildren immersed in a completely different world, it’s something they have concerns about.

Even as she talks about being excited to get her new Apple Watch, she wonders when too much screen time is too much — and when it starts to impact their connection to the world around them.

As 2020 approaches, Urban Tribe members said being that unusual anomaly isn’t something they would have ever imagined as a possibility as the group formed at the turn of the 21st century.

It’s that light-heartededness she says is the key to getting through the tough times, and something that is developed keenly with the light jabs over dinner, at the movies and at field trips aroud the state.

“Late again, as usual,” they jabbed at Larry, sneaking in a few minutes after the usual 5:00.

“You’re late on your dues,” they chided another.

Asked to describe their friendship, the first adjective suggested was “animosity,” to guffaws around the table.

“It’s the nicest group I’ve ever been in,” Jenkins said, in all seriousness.

The warmth and acceptance without reservation they’ve found in the group just isn’t something they can imagine replicating over blue screens,