Helping those who need help

-Messenger photo by Kelby Wingert
Troy Schroeder, of Memories in Focus Photography, keeps a coat rack and boxes of hats, gloves and scarves outside his downtown studio at 521 Central Ave., for Operation Warm it Forward.

-Messenger photo by Kelby Wingert
Troy Schroeder and Linette Nelson started Operation Warm it Forward about three years ago. The project is aimed at providing coats and warm clothing to Fort Dodge residents in need. There’s a coat rack outside Schroeder’s studio at 521 Central Ave., where anyone can take a coat or leave a coat whenever they want.

-Messenger photo by Kelby Wingert
A second coat rack was added for Operation Warm it Forward this year. The second rack is located outside Mitch Lunn State Farm office at 616 N. 15th St. 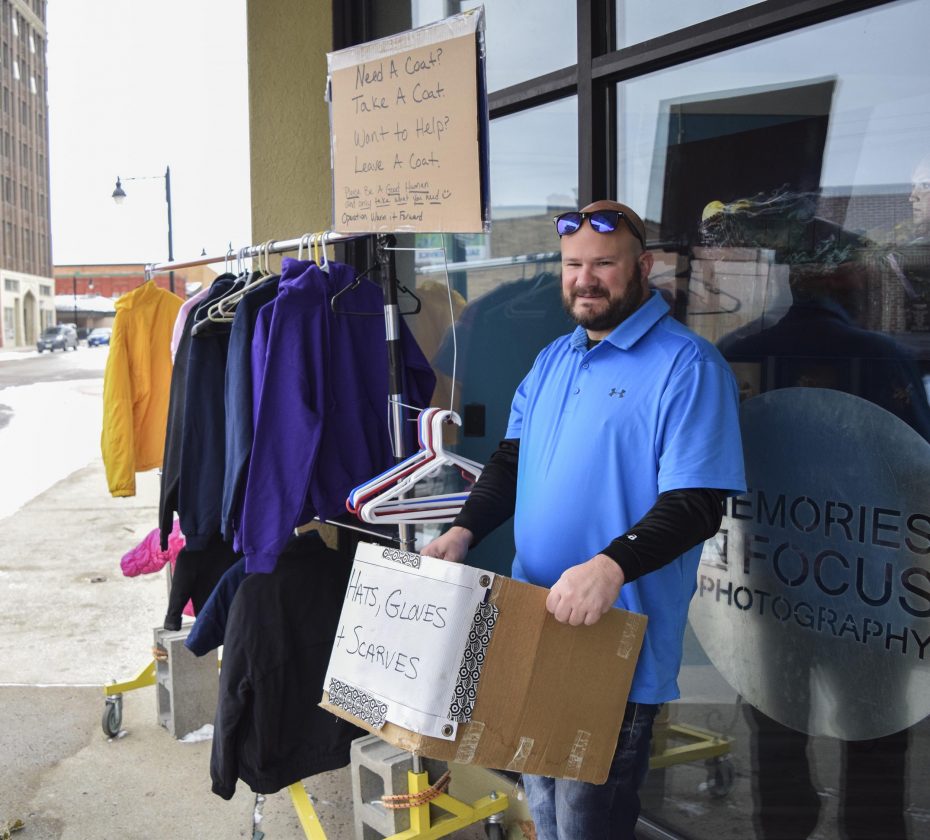 -Messenger photo by Kelby Wingert
Troy Schroeder, of Memories in Focus Photography, keeps a coat rack and boxes of hats, gloves and scarves outside his downtown studio at 521 Central Ave., for Operation Warm it Forward.

Troy Schroeder has a huge heart for the homeless and people who are struggling. That’s why he and Linette Nelson decided to do something to help homeless and cold Fort Dodge residents.

A few years ago Nelson, a Fort Dodge resident, saw a social media post that went viral on Facebook.

“There was a community that, along their entire downtown, people were bringing coats and putting them on the utility poles, like wrapping them around and zipping them up,” she said.

Nelson knew she wanted to do something similar in Fort Dodge.

“I knew Troy had the same passion as I do for helping anybody that we can help,” she said. 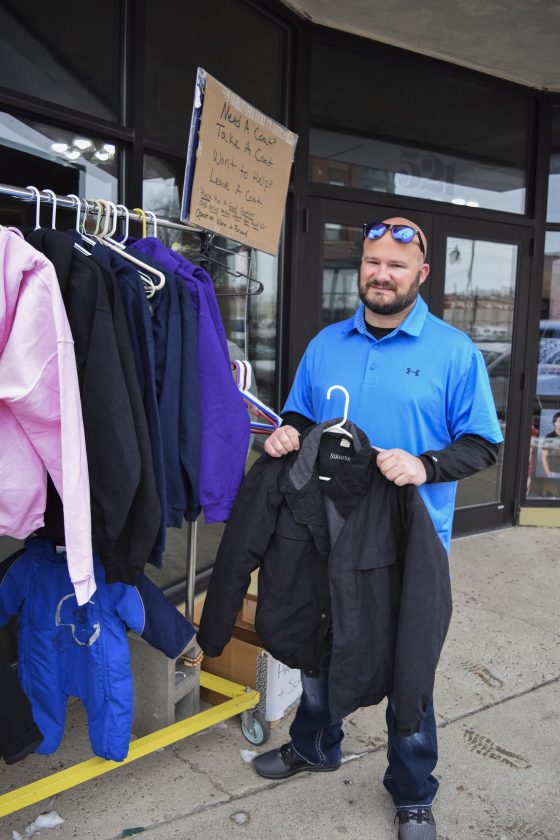 -Messenger photo by Kelby Wingert
Troy Schroeder and Linette Nelson started Operation Warm it Forward about three years ago. The project is aimed at providing coats and warm clothing to Fort Dodge residents in need. There’s a coat rack outside Schroeder’s studio at 521 Central Ave., where anyone can take a coat or leave a coat whenever they want.

So the two came up with a plan to provide coats and warm clothing for those who need it the most. The plan was simple — set up a coat rack outside Schroeder’s photography studio on Central Avenue and stock it with donated coats. People who need the coats can just walk up and grab one that fits, and people who have coats to donate can just stop by and hang them up. Soon, the project expanded to include sweatshirts, hats, gloves, socks, hand warmers and other warm items.

“I would say over the last three years, we’ve probably given out well over 1,000 coats in our community,” Nelson said.

The convenience and anonymity of the unmanned coat rack is one of the things that makes it successful, Schroeder said.

“I do think it’s nice that they can just walk up and grab it,” he said. “People can take what they need and people can leave what they want without ever having to see me.”

Schroeder said that even though no one is required to see him or say anything when they take a coat, sometimes a person will stop in the studio to say thanks and chat with Schroeder. Sometimes they’ll tell him their stories about how they got to where they are and why they’re struggling, and Schroeder will try to steer them toward more community resources and organizations who can help. 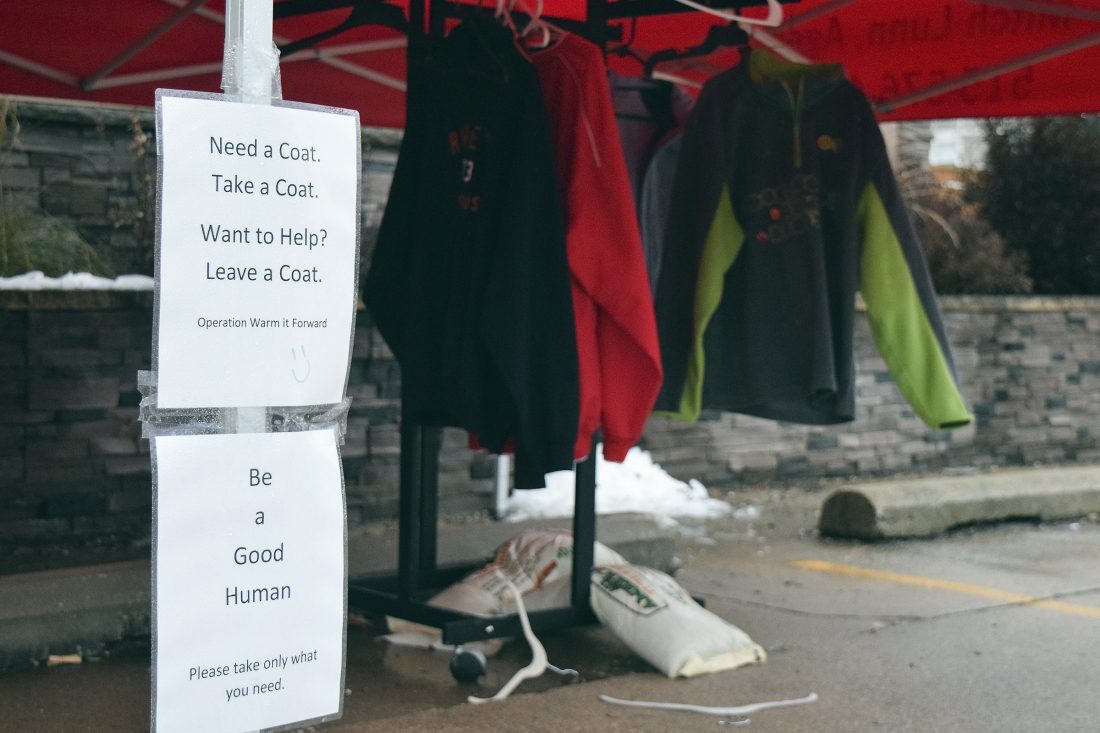 -Messenger photo by Kelby Wingert
A second coat rack was added for Operation Warm it Forward this year. The second rack is located outside Mitch Lunn State Farm office at 616 N. 15th St.

With the coatrack sitting outside 24/7, Schroeder just trusts that people taking the coats and warm clothing need them and their situation is no one’s business.

“Who am I to decide what they need?” Schroeder asked.

Schroeder’s downtown photography studio, located at 521 Central Ave., made sense for a headquarters for the coat rack, Nelson said.

“If you go downtown a lot of times, you can see a lot of people out walking,” she said. “We really wanted to put it down there and really be able to help people where there was an identified need. We definitely know that being in Fort Dodge and just going out and about, you can see people are out in the cold without the correct winter wear on and coats are not cheap.”

While the city has many secondhand stores and other programs to turn to, Nelson and Schroeder just wanted to have another option available for those who need it.

“Even if it was something that someone might have $20 to go to a secondhand store and pick up a nice coat, we don’t necessarily know what that $20 was taken away from in their living budget,” Nelson said. “Just being able to give this service to them and knowing that it’s something that in our environment, this is a life need. This isn’t something that’s a luxury item for anybody.”

The residents and businesses of Fort Dodge have been generous, Schroeder said.

“This year alone, Optic Ink gave us like 400 sweatshirts,” he said.

“Beacon of Hope’s Second Chance store has donated coats to us more than once and in large bulk amounts of coats,” Nelson added. “So they have supported us with this cause just as much as we try to send people their direction to help support people with what they need.”

People looking to donate warm items can either just show up to the coatrack and hang the items up, or if the rack is full, bring them into Schroeder’s studio and he will add them to the rack as it starts to thin out. Schroeder just asks that coats and items be in decent condition.

Schroeder said that occasionally, someone will stop in his studio and say they don’t have coats to donate, but want to contribute to the project anyway.

“We do have people who have donated cash,” he said. “Typically, I’ll just wait until the end of the year when spring comes and all the stores’ coats go on clearance and buy as many coats as I can. Or throughout the year, I’ll just go buy a bunch of hand warmers and throw bags of hand warmers in the box.”

Operation Warm it Forward has a Facebook page, run by Nelson, where she posts updates on the coatrack and sometimes puts out calls for donations when supplies run low. Often, Nelson will receive a request through a private message from families looking for specific sizes of children’s coats and she will put out a request for those donations, keeping the families’ information private.

With the success of the last three years of this project, Nelson and Schroeder were able to expand it this year, adding a rack outside the Mitch Lunn State Farm office at 616 N. 15th St.

Anyone interested in hosting a rack for Operation Warm it Forward can reach out to Nelson on the Facebook page, or call Schroeder at his Memories in Focus Photography studio by calling 515-576-0764.

Schroeder said the city of Fort Dodge’s name “gets drug through the dirt a lot and it’s unfortunate because there’s a lot of really good people here.”

Nelson added that Operation Warm it Forward and other programs and organizations dedicated to helping people throughout the community are really what Fort Dodge is all about.

“There are so many things that people truly come together in the sense of community here,” Nelson said.