Carson King shares how a Twitter post changed his life; speaks to MNW students about the power of social media

-Messenger photo by Deanna Meyer
Carson King, of Altoona, speaks about what he learned through his experience with social media to an audience of Manson Northwest Webster fifth- through 12th-grade students Monday morning at the high school in Manson.

-Messenger photo by Deanna Meyer
Carson King poses with a group of sixth-graders after an assembly Monday morning at Manson Northwest Webster High School in Manson. King fielded questions, signed autographs and took pictures with MNW students after speaking with them about the power of social media. 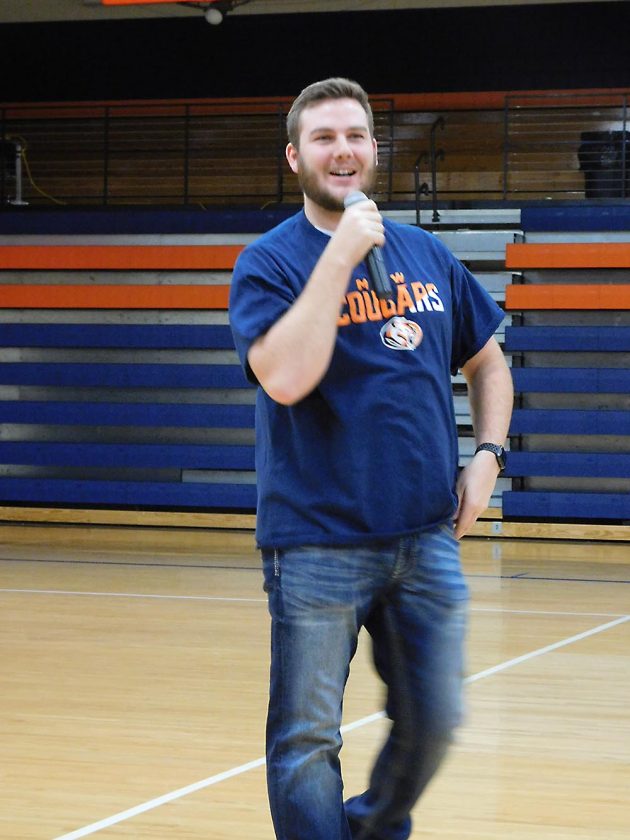 -Messenger photo by Deanna Meyer
Carson King, of Altoona, speaks about what he learned through his experience with social media to an audience of Manson Northwest Webster fifth- through 12th-grade students Monday morning at the high school in Manson.

MANSON — When Carson King was 16 years old and an active high school student at Prairie City Monroe, he thought it would be funny to share a TV comedian’s quote with a friend on Twitter.

Eight years later, that single post nearly derailed an innocent fundraising effort that went viral, threatened to ruin his reputation and ultimately pushed him into the national spotlight.

The 24-year-old shared the lessons he learned from his experience — including what he would tell his 16-year-old self — with fifth- through 12th-grade Manson Northwest Webster students Monday morning.

For King, it began simply enough.

As an unabashed Iowa State fan, he thought it would be funny to make a sign “asking for adult beverages” during a September home game in Ames. His campaign went viral when he happened to find himself in view of ESPN’s “College GameDay” show, as the entire crew set up right in front of him. The sign requested money be sent to his personal Venmo account for his beer supply. 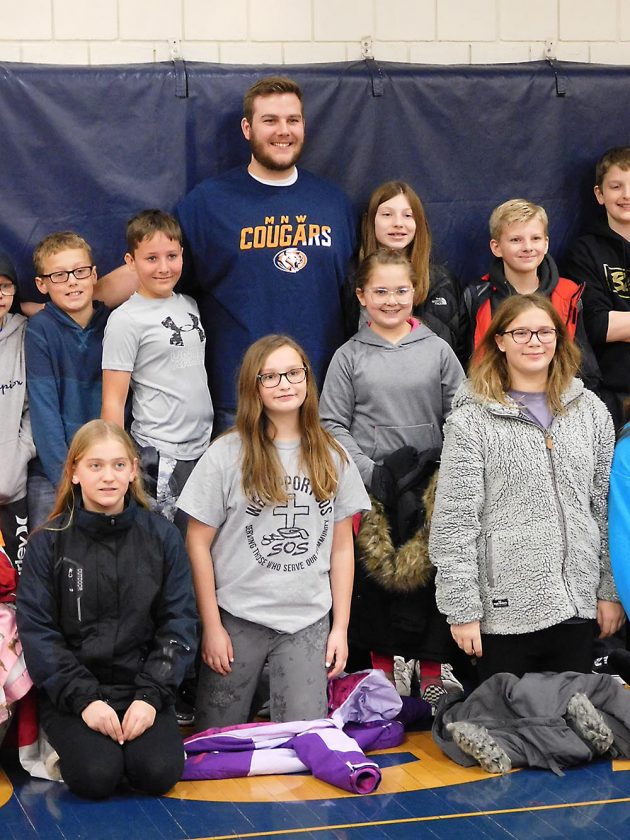 -Messenger photo by Deanna Meyer
Carson King poses with a group of sixth-graders after an assembly Monday morning at Manson Northwest Webster High School in Manson. King fielded questions, signed autographs and took pictures with MNW students after speaking with them about the power of social media.

Thinking he might make $20 from a sympathetic fan if he was lucky, King was surprised to find he’d made between $400 and $600 in the first half hour.

At that point, he made a decision.

“I decided I could do a little bit better than myself here,” King said, “so I decided what I wanted to do was send it to charity.”

He chose the University of Iowa Stead Family Children’s Hospital and began to share his idea with friends and family on social media. However, the campaign quickly grew to include local and national TV and radio stations — even one in Australia.

Money began pouring in. Next Busch Light and other businesses joined in with matching funds.

“Pretty soon we had a million dollars. It was insane,” King continued..

But things changed when a Des Moines Register reporter discovered racist quotes he had posted to a friend on Twitter while in high school.

In those days, King said, “Twitter was like you, and like your friends in your class. That’s all it was,” he said. “It was just a giant group chat. That’s all we used it for. I had 25 followers.

“Eight years later, they were able to find the joke I made quoting a TV show.”

But because of it, Busch contacted him and said they would continue to match donations to the hospital for a month, but added, “We don’t want you to tag us any more. We don’t want to talk to you any more. We’re done.”

He had reached another defining moment.

“I decided this was a chance to own up,” said the Altoona resident, “because everyone makes mistakes when they’re younger — everyone. You learn, you grow, you become a better person. No one’s perfect.”

He told students, “That’s the best thing to do when you make a mistake. You say, ‘Yep, I was a dumb kid.’ Move forward.”

Taking initiative, King chose to admit his mistake and discuss his teenage actions via a news conference on television. That’s when his image changed for the better, as people learned who King was and got behind his campaign.

“People saw that and realized, ‘Wow, this kid is just a normal kid. … He’s not trying to be president. This is crazy,” he said. “So people really got behind me. They realized I make mistakes, and I grew and I learned and I became a responsible, mature adult. … Well, as mature as you can be at 24.”

Within a day, the campaign reached over $2 million.

“To go from that $1.19 posterboard I bought at Wal-Mart to $3 million, I never thought it was possible,” he said.

First, he said, “No act of kindness is too small,” and that act can come from anyone.

“And that doesn’t have to be raising money,” King said, “If someone’s having a bad day, just cheer them up, talk to them, include people in things, especially in school. School’s hard enough.”

Secondly, social media is a powerful tool that can be viewed by millions of people quickly.

“It can do a lot of good,” King said, “but it also makes your life very public.”

“I always like to think, ‘What would my Mom or Grandma think if I posted something on social media?”

He warned students that things they post now can affect their future, whether in high school, college or beyond.

“Something you think is a little funny or a little mean can get you fired from a job.”

Finally, he said, “You’re never too small to make a difference with anything you do. … If you live your life doing good things for other people, good things will come to you eventually.”

Today, King, who is a security supervisor at Prairie Meadows Casino, is working to set up his own foundation to “reach as many people as possible.” The money raised for the Iowa City hospital is used for a wide array of needs, from continuing education to heart monitors for the neonatal intensive care unit, to cancer treatment and even a child life specialist who does activities with a sick child so the parents can have a break and sense of normalcy.

On his days off, King has been sought out to speak at schools and can be contacted at carsonkingspeaks@gmail.com

“A lot of the kids realize I’m just a regular guy,” he said. “It’s sparked a lot of fund raising.”

After the assembly, MNW senior A.J. Cardenas said, “It really opened my eyes that when I grow up, everything I do now will affect me in the future.”

Freshman Abi Shannon echoed that comment, saying she learned, “You really have to watch what you do on the internet.” 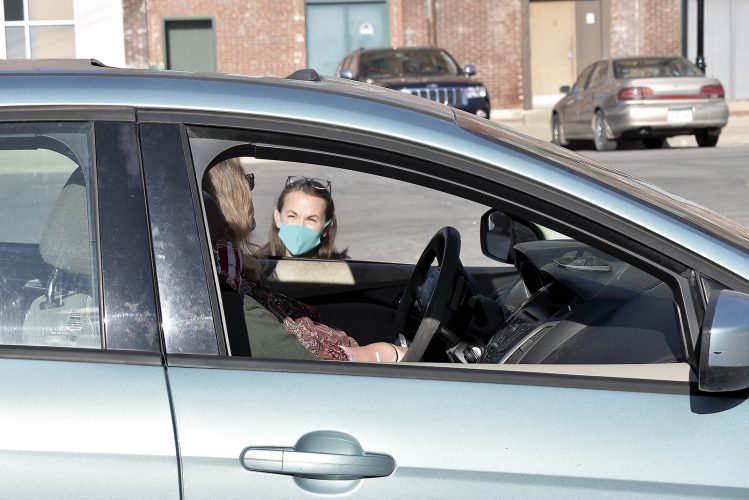 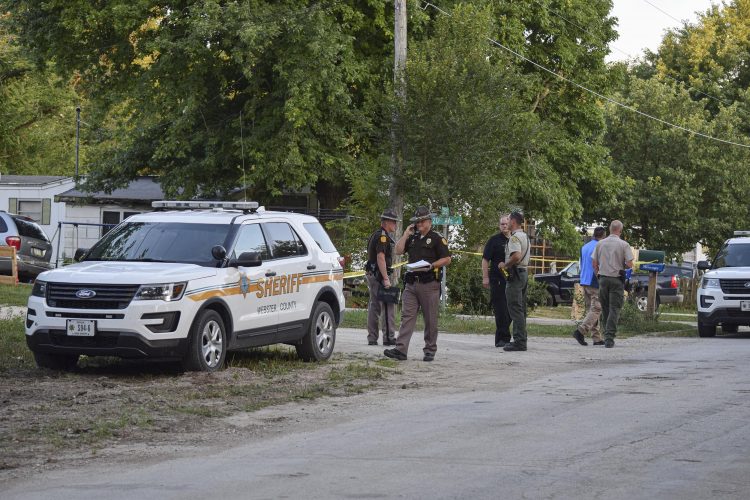 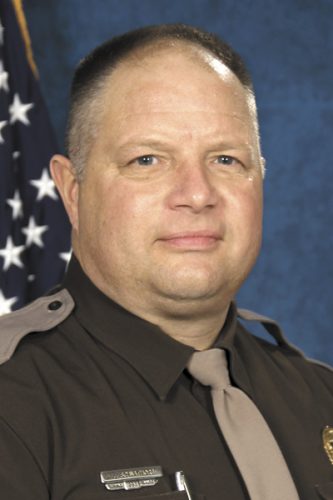