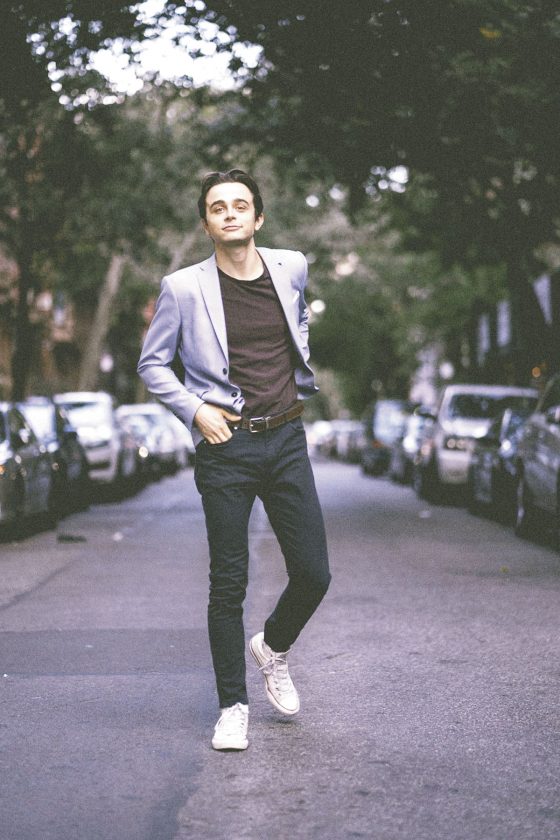 It took thousands of traveled miles, a life on both coasts and a string of noteworthy professional endeavors for Ahlers to gain a true appreciation for his hometown as well.

The 2015 Fort Dodge Senior High graduate is hosting a concert special, “Home for Christmas with Ben Ahlers,” on Dec. 21 inside the Opera House at the Fort Museum and Frontier Village. The event will raise money to directly support both the Fort Dodge Fine Arts Association and the FDSH vocal music booster club, but it will also afford Ahlers the opportunity to express his personal gratitude — a responsibility he feels is long overdue.

“If we are all products of our experiences and environments, then I owe literally everything to my family and this community,” Ahlers said. “Fort Dodge poured not only its emotional love and support into my growth as a person and a performer, but its own tax dollars into our education. So I have to be more than just thankful. I want to give back tangibly and proactively as much as I possibly can.

“When I came home in September (this past fall), it really put things into perspective. I was out of school for the first time (Ahlers graduated with a Bachelor of Fine Arts degree in musical theatre from the University of Michigan last spring) and was finished with (the NBC series) ‘The Village.’ I’d seen a lot and done a lot over the last four-plus years. There was just something about being back in Fort Dodge at that moment that really made me truly understand how special this community is and why.”

Ahlers plans on creating a festive mood at the Opera House, performing Christmas classics with a three-piece band led by his aunt, Shelly Bottorff (keys); Dean Davis (drums); and Jamison Gibson (bass). Other local guests will join Ahlers in a “very relaxed, intimate environment” to put the audience in the holiday spirit four days before Christmas.

“We’re really focused on keeping our costs low to give almost everything back to the Fort Dodge Fine Arts Association and the Fort Dodge Senior High vocal music boosters,” Ahlers said. “Those groups are very important to me personally, and programs I owe nearly everything to as an artist.

“I may not have the notoriety or the financial means to make a huge impact, but I do have the time and energy to try and help. So I’ll do what I can.”

Ahlers admits he’s “a little nervous, but very excited” about rediscovering his roots as a singer.

“I’m really looking forward to finding that love again,” Ahlers said. “When I got to Michigan, as a freshman, I realized pretty quickly that I was a good ‘role player’ surrounded by vocal athletes who could just sing out of the gym. So my focus shifted more toward acting.

“I do miss singing, and I don’t want to lose track of that. It’s a core part of who I was growing up in this community. I haven’t really been able to explore my true creative side and the process behind it, through writing or singing or performing. So this is an opportunity to reconnect in that way to music.”

The decision to host a holiday concert was initially just a matter of “being the right time of year” and the best fit for Ahlers’ schedule.

“It was more pragmatic than anything else at first,” Ahlers said. “But I started to realize after a while I was subconsciously finding a way to tie everything into family and friends and what Fort Dodge means to me at my core. There’s no better time to do it than around Christmas.

“There’s just something so fundamentally beautiful about coming home for the holidays.”

While attending Michigan, Ahlers landed a number of prominent roles that allowed him to quickly make a name for himself both on stage and screen. In addition to his work on “The Village” while living in New York City, Ahlers also completed performances at the Williamstown Theatre Festival with “The Closet” and “The Member of the Wedding.” He landed a spot on the CBS show “Instinct,” and was the lead in the Runyonland Productions show, “Walk Off.”

Last summer, Ahlers moved to Los Angeles for the play “Good Boys.” And most recently, he wrapped up a stint on Netflix’s “Chilling Adventures of Sabrina” in Vancouver.

But “a sense of rootlessness and, often, loneliness” had him gravitating toward home as often as possible.

“It’s like a safe haven,” Ahlers said. “People need to know there is something so special and unique about Fort Dodge — it provides a peace of mind that is very respected and sought-after by the outside world. I’ve been beyond blessed and fortunate to experience what I have professionally in a very short period of time, yet there is a sacrifice to it. You lose that sense of community, where people come together and share their lives beyond just the day-to-day grind.

“Not everyone is lucky enough to go elsewhere and gain a perspective away from where they live or grow up. It reminded me of what we have in our own backyard. There are a ton of outlets for the arts here. It’s pretty staggering.”

Ahlers doesn’t want Fort Dodge to rest on its laurels, though.

“It’s really important for people to continue to stay. Come back. Give back. Invest,” Ahlers said. “If you look (at the city’s history), people and groups have always taken the initiative and put the sweat equity into growing and cultivating the right environment for both the current and future generations (of Fort Dodgers).

“More and more, I’m just amazed by the genius of our community. It’s remarkable. I want to use this (concert) as an opportunity to thank some of the people who helped make so many of us what we are today.”

Doors will open at 6:45 p.m., and the concert begins at 7:30. There will be a meet-and-greet session after the show. Freewill donations will be accepted, with all proceeds again going to support the aforementioned organziations.

Tickets are available through First American Bank, or online at https://homeforchristmas.ticketleap.com/tickets

HOME FOR THE HOLIDAYS WITH BEN AHLERS

Where: Opera House at the Fort Museum and Frontier Village