-Messenger photo by Elijah Decious
Margaret Seiler, a key eyewitness for the state, said Wednesday that she personally saw Tanner King sprinting with a gun in one hand and a cell phone in the other moments after she heard shots near the scene of the crime.

-Messenger photo by Elijah Decious
Defense attorney Paul Rounds makes the defense’s opening statement, arguing that Detective Larry Hedlund “ramrodded” Tanner King as the perpetrator in the killings and ignored all evidence and potential motivations presented to the contrary. He also posits that Cletio Clark, whom King was accused of taking a failed shot at, is the actual killer.

-Messenger photo by Elijah Decious
Webster County First Assistant Attorney Ryan Baldridge makes the state’s opening statement, telling jurors that they will be sure of two things: that El Dominic and Marion Rhodes are dead, and that Tanner King killed them. 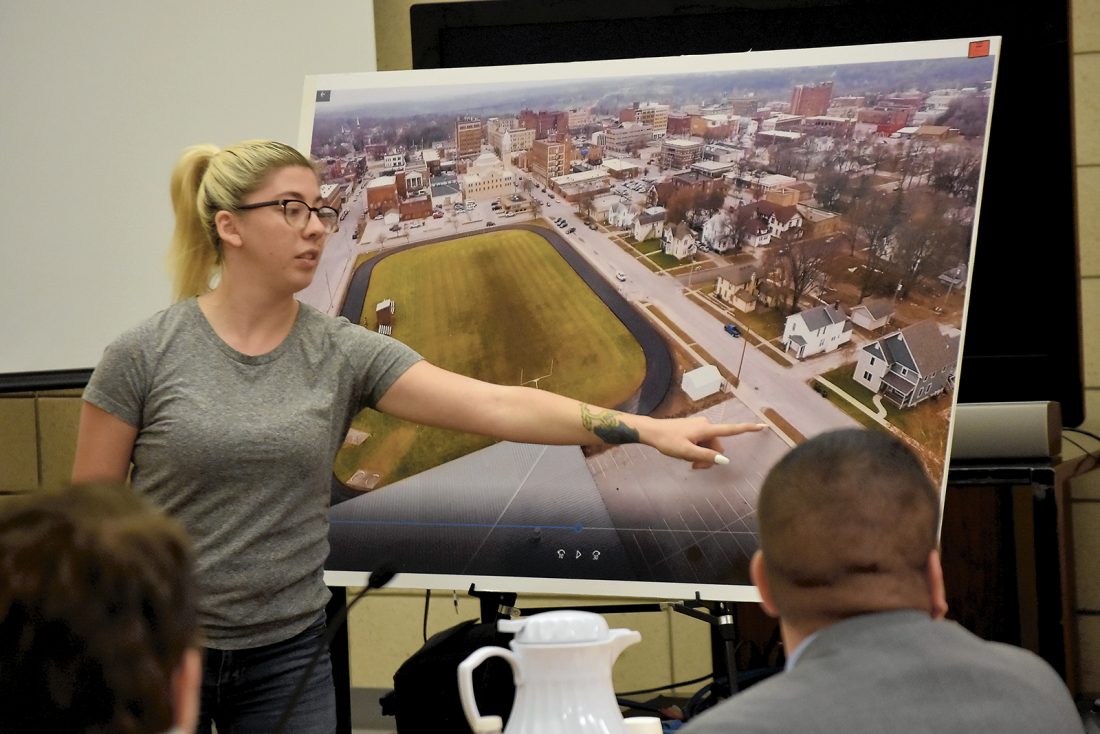 -Messenger photo by Elijah Decious
Margaret Seiler, a key eyewitness for the state, said Wednesday that she personally saw Tanner King sprinting with a gun in one hand and a cell phone in the other moments after she heard shots near the scene of the crime.

NEVADA — Tanner King’s double murder trial got underway in its second day as an eyewitness near the crime scene, the victims’ emotional fiancees and a teenager who interacted with the defendant the night of the crime took the witness stand.

“At the end of this case, the state believes you will be certain of at least two things: that Marion and El Dominic Rhodes are dead, and this guy is the individual that did it,” said First Assistant Webster County Attorney Ryan Baldridge in his opening statement, pointing to King.

King is accused of shooting the brothers on Oct. 22, 2018, in an alley near Second Avenue North and Ninth Street. He is charged with two counts of first degree murder.

In what he says was a fair, impartial and thorough investigation with hundreds of interviews and “countless” hours spent, Baldridge said that detectives “didn’t start with Tanner King,” but rather “worked their way” to him from “two dead guys in the alley.”

But even with “countless” hours spent, King’s defense attorney, Paul Rounds, said that Detective Larry Hedlund of the Fort Dodge Police Department had his mind made up in 94 hours, cementing a confirmation bias that ignored other evidence, motives and explanations. 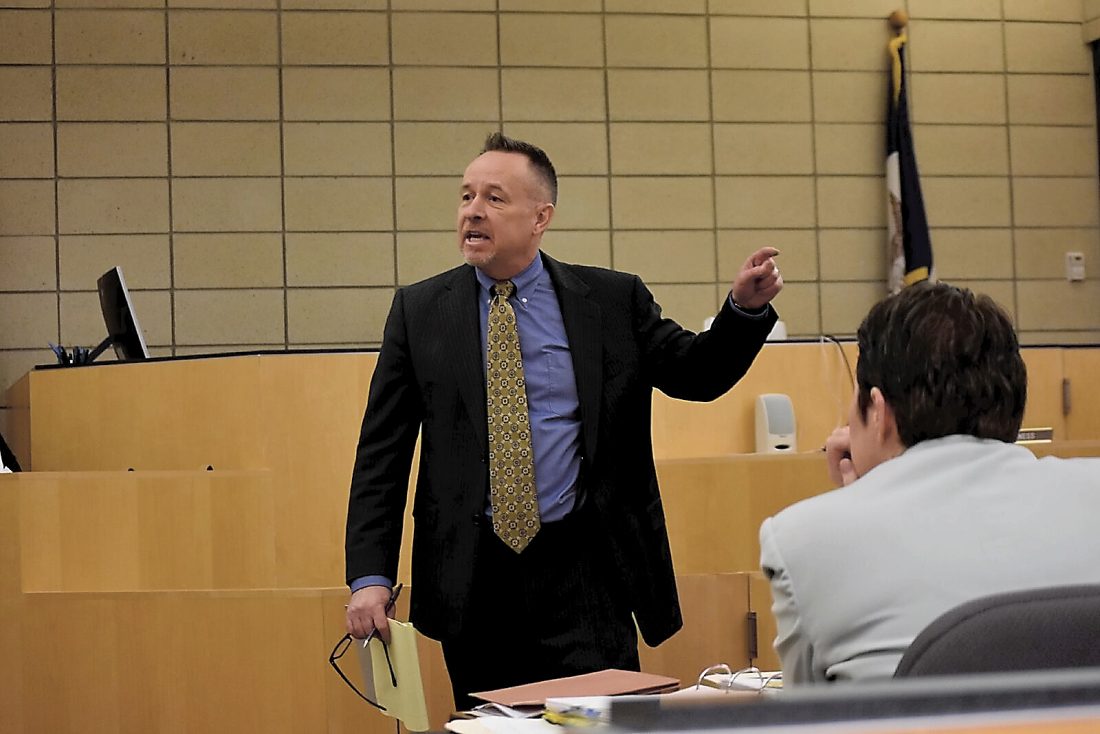 -Messenger photo by Elijah Decious
Defense attorney Paul Rounds makes the defense’s opening statement, arguing that Detective Larry Hedlund “ramrodded” Tanner King as the perpetrator in the killings and ignored all evidence and potential motivations presented to the contrary. He also posits that Cletio Clark, whom King was accused of taking a failed shot at, is the actual killer.

“In my effort to be more likable, this is going to be short,” Rounds said in his opening statement, reeling from the final minutes of jury selection that morning in which an older man in the jury pool said he didn’t want to be there because of Rounds.

Rounds analogized what he said is Hedlund’s confirmation bias — a topic he probed the jury pool on heavily — to the Flat Earth Society, saying that both ignored, manipulated, or coerced information presented to the contrary to fit their preconceived notions.

“Mr. Hedlund decided his truth in less than 94 hours, and he wanted everyone to tell his truth,” Rounds said, adding that Hedlund ignored, manipulated and attempted to coerce contrary inconsistencies, motives and explanations and witnesses to tell “his truth.”

The state’s first witness, Margaret Seiler, said she saw a man from her bedroom window sprinting through the street with a pistol in one hand and a cell phone in the other, about half a block from where the Rhodes brothers were found. 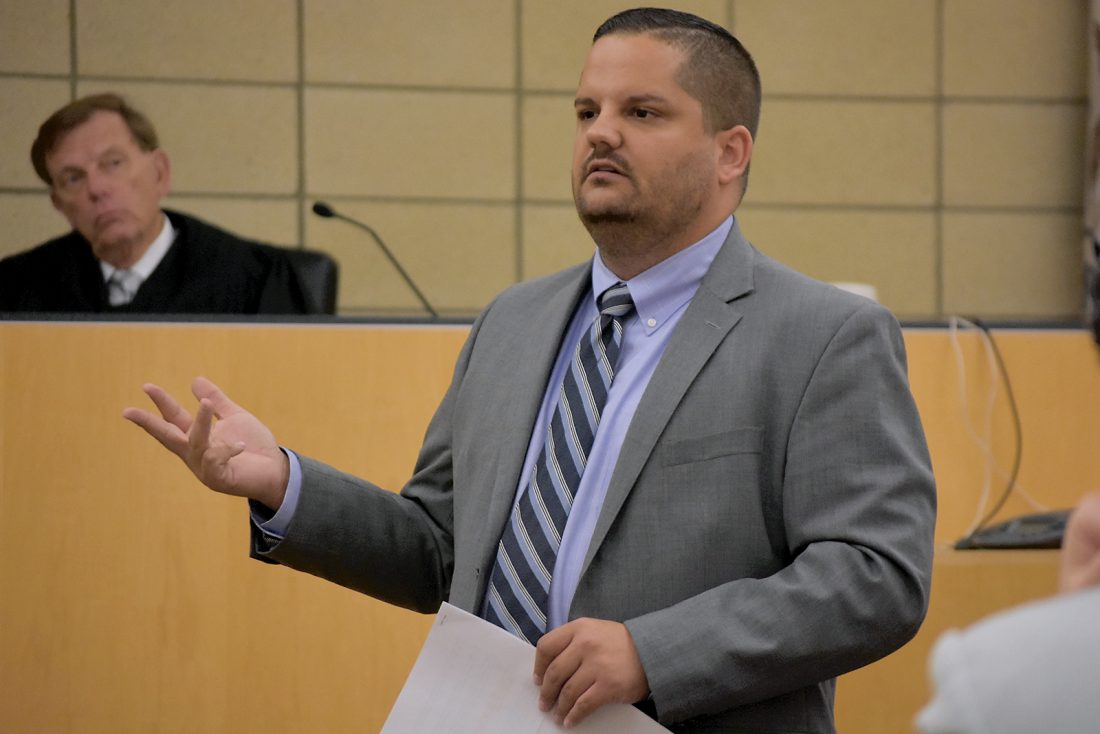 -Messenger photo by Elijah Decious
Webster County First Assistant Attorney Ryan Baldridge makes the state’s opening statement, telling jurors that they will be sure of two things: that El Dominic and Marion Rhodes are dead, and that Tanner King killed them.

“He was sprinting like he was trying to win a damn race,” she told the police.

She did not call 911, assuming others had after she heard gunshots. The self-described “nosey neighbor” simply went to her bedroom window with a view into the alley.

The lighting outside her window was a point of contention with the defense, who on cross-examination made a point to highlight the difference between how well-lit the state’s photos of the view were and how lit the defense’s photos of the area were.

Defense attorney Katherine Flickinger tried to pin Seiler down on a few key description details, among them: whether the man was wearing glasses, what his head was covered with, his height and weight, and the way King came to be identified through her description.

With Seiler’s resistance to the defense’s cross, Flickinger was forced to refresh the witness’ memory by playing a recording of the interview she had with the detective. In the recording, she said hesitantly that she might be able to identify the face she saw if presented with it again.

Her voice and answer in the interview were less confident than she was under the state’s direct examination, when she pointed to King in the court room, identifying him with certainty as the man she saw that night.

At the heart of the cross-examination was whether Seiler recognized the face she saw that night and simply didn’t remember his name, whether she was unfamiliar with the face altogether or whether she could even see the face.

“You’d agree that nowhere in there did you ever mention you were familiar with this guy?” Flickinger asked.

“I didn’t want to get involved with it,” Seiler responded, side-stepping the question.

Seiler called the police about what she saw at the urging of her grandmother, who knew the Rhodes brothers personally. She did not pick King out of a line-up, but confirmed that the man she saw was King after the Fort Dodge Police Department posted a picture of King on Facebook, announcing his arrest in connection with the case.

The fiancees of El Dominic and Marion Rhodes also took the stand.

“It was just like any other day,” said Brionna Sankey, El Dominic Rhodes’ fiancee, as she described Oct. 22 — until it wasn’t.

She articulated the phone call her fiance took from his brother that night before he was shot.

“I’ve never heard (Marion) like that before. His voice just sounded like there was something going on,” she said, describing the voice as shaky. “It wasn’t like him at all. I just knew something was off.”

“Be right back. I love you,” El Dominic Rhodes said, looking at her for the last time before he was shot, five to seven minutes later, according to her testimony.

Brandie Mack was just as emotional in describing how fiancee Marion Rhodes left for cigarettes that night, never coming back.

But her testimony was a key part to building the defense’s argument that the slayings were a hit taken out by Cletio Clark on behalf of someone else as a result of “bad blood.”

The state previously alleged that King took a failed shot at Clark after killing the Rhodes brothers. They have since dropped the attempted murder charge against the defendant.

Mack said that El Dominic Rhodes came by five minutes after his brother left, asking where he was, describing his behavior as “jumpy.”

Another five minutes later, she heard the gun shots and saw police out of her back door.

Rounds brought up Mack’s connection to Johnny Young, of Kansas City, in laying the foundation for highlighting who he says is the real killer. In 2011, Marion Rhodes and Mack were charged, alongside Young, with forgery.

Rounds tried to establish that Clark was carrying out a hit on the Rhodes brothers, saying there was “bad blood” between Mack, Rhodes and Young after it was perceived by Young that Mack “snitched” on him. Young went to prison for 25 years on the charges, Rounds said.

The attempt didn’t go over well with the prosecutors.

“She got a deferral on a misdemeanor. That’s the motive for Cletio committing this horrible act,” Rounds explained after jurors cleared the room, saying he was not attempting to elicit the testimony as evidence but as an explanation of another motive. “This is the motive for the killing. It has nothing to do with her being a bad person.”

One of the state’s final witnesses of the day, 18-year-old Haylee Keller, described her interactions with King at her home the night of the killings. King frequently visited her home to talk to her father, who used to work at the Webster County Jail.

Keller told the court that King talked about walking by the scene of the crime on his regular “blunt walk” before getting to her house later that evening.

“He would smoke a blunt (of marijuana) and walk around town every day,” she explained.

She previously told police that the way he described it was “almost as if he had been there.” 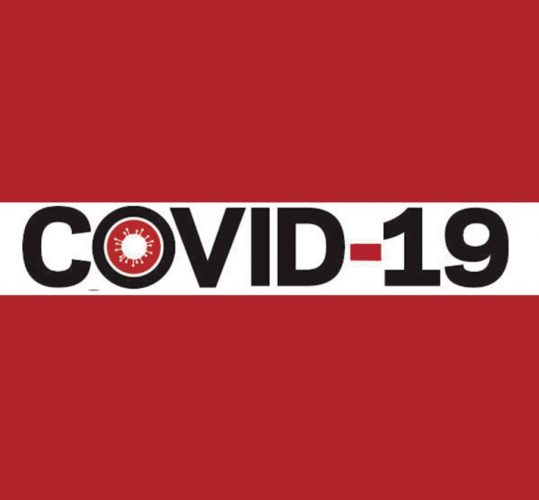