-Messenger photo by Elijah Decious
Amber Converse, left, and Stacie Coppinger have formalized their efforts to make kindness more visible with their new group, Sharing Kindness Fort Dodge. Here, Stacie holds a card received with flowers given by an anonymous person, a small example of how kindness has touched and inspired them to pay it forward. 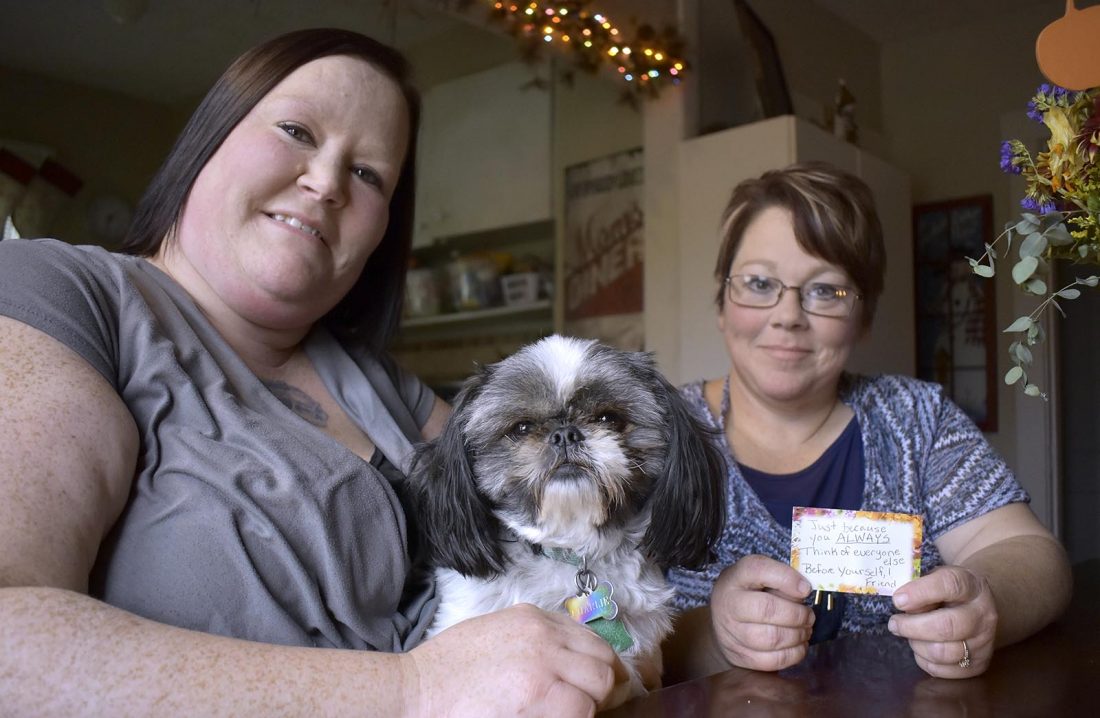 -Messenger photo by Elijah Decious
Amber Converse, left, and Stacie Coppinger have formalized their efforts to make kindness more visible with their new group, Sharing Kindness Fort Dodge. Here, Stacie holds a card received with flowers given by an anonymous person, a small example of how kindness has touched and inspired them to pay it forward.

Stacie Coppinger only had one interaction with the late Rev. Al Henderson, but it was enough to make a difference in her life. Now in turn, she’s trying to spearhead a systemic difference in other Fort Dodgers’ lives.

Henderson showed up to the door with Fort Dodge police officers at a time of conflict for her family. The police had to be called for help in a violent situation. His kindness and guidance helped in a difficult time, Coppinger said.

And while she always tried to “pay it forward” before, his death sparked new life in her to change her town.

“When Pastor Henderson was killed … I have never felt so helpless in my life,” said Coppinger, pausing to choke back the tears at her kitchen table.

Across the table, her cousin, Amber Converse, tried not to smear her eyeliner as she carefully dabbed the tears on her left eye.

The tragic event for such a deeply-embedded figure in Fort Dodge was a denouement that urged them to act after a string of shootings, some fatal, over several weeks.

His violent death lit their idea to organize a more formal effort for making Fort Dodge a place known for kindness and positivity.

“I don’t care what it is, we’ve got to do something,” Coppinger said.

You may have seen their newly-created Facebook page, “Sharing Kindness Fort Dodge,” which they started as a place for people to share the good things they see and hear happening around town.

Sometimes they’ll take coffee mugs filled with candy or carnations to secretaries at local businesses. Other times, they’ll pay for the car behind them in the drive-thru and look in the rear view mirror to wait for the reaction.

Last time, the McDonald’s cashier said they stopped counting after the chain of cars paying for the next person’s meal reached 21.

“That stuff happens every day, it’s just that nobody hears about it,” said Converse.

So they’re doing something about it, making positivity not only more widespread but also more visible.

The first box of 200 business-size cards let recipients know they have been the unsuspecting target of “a random act of kindness,” asking them to simply pay it forward, if able, and share the experience on Facebook.

That form of viral marketing has taken root. In just a few days, they were out of cards and had to order another box.

To them, the most fruitful acts of simple and often immaterial kindness have brought priceless smiles and tears.

“We made people cry unintentionally,” Coppinger said, laughing at the irony.

They tell their children, who now look forward to making others happy, to call a senior citizen by name when delivering a meal and tell them to have a nice day, because “it’s the little things,” that make it matter.

One morning, it was just hugging a woman at Fareway who looked like she could use one.

“We all have different struggles every day,” Coppinger said. “You don’t know what anyone’s going through.”

With suicide rates on the rise, she’s cognizant that small gestures can make a difference big enough to give someone the hope they need to make it another day.

“Even the smallest things can spread joy,” she said. “You don’t know what they’ve been through that day.”

And little by little, they want to make a big impact.

“Our goal is to turn the town of Fort Dodge around,” said Converse. “We want Fort Dodge to be known as a loving community. Not crime, drugs and killing.”

And even if they can’t fix the crime or the issues that come from drugs, she said this is something they can help with.

“Everyone has such a negative image of Fort Dodge, you know, the dirty Dodge comments and what not,” Coppinger added. “We just want more positive influences and a better outlook on Fort Dodge.”

Helping others has helped them heal from the pain of the loss of Henderson, they said.

The duo is connecting with other groups like Take Back Our Town and hopes to build a stronger network for building kindness. For now, they look forward to spreading joy with little stockings to shine a bright spot in a holiday season that can be bleak for the less fortunate.

Those interested in spreading kindness as Fort Dodge enters the holiday season are encouraged to visit them on Facebook to learn how to help or to share how they’ve been touched by kindness.