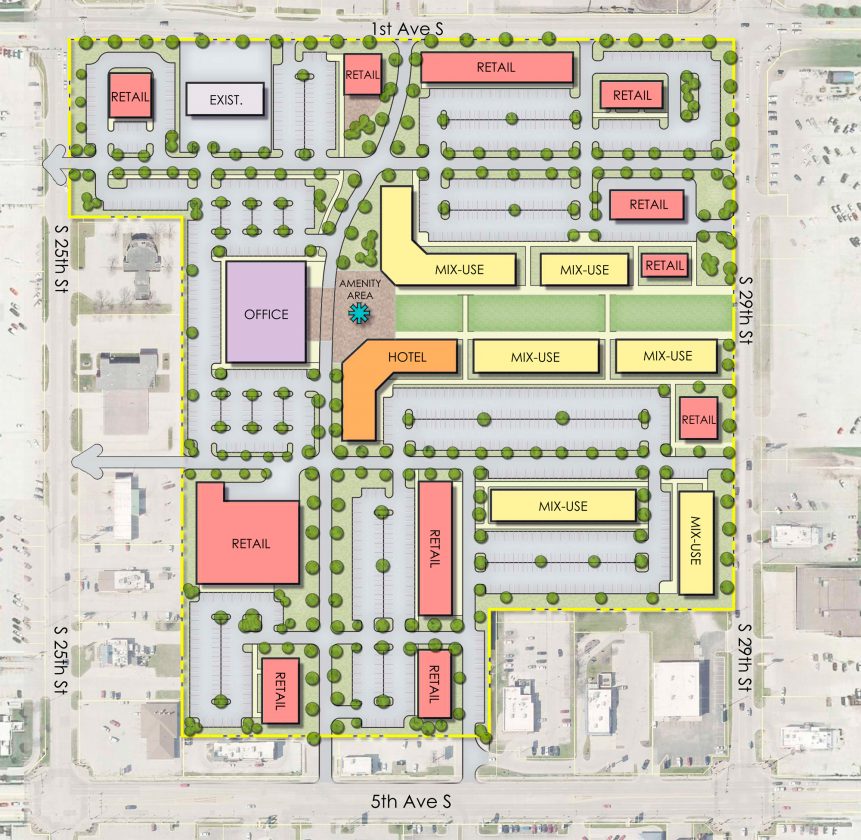 The Crossroads Mall in Fort Dodge will be torn down and replaced with a series of smaller stores, an office building and a hotel under a plan unveiled by an Ankeny developer.

The project will take several years to complete, but the former Sears store at the mall may be demolished by the end of this year.

That plan is the vision of Crossroads Plaza Development LLC. That firm is in the process of buying both the mall and the old Sears store, which is actually a separate property with a different owner.

In August, city officials revealed that a developer had made an offer to buy the mall from its current owners, Namdar Realty Group, Mason Asset Management and CH Capital, all of Great Neck, New York.

That developer, Crossroads Plaza Development LLC, is now ready to close the deal, but to do so it needs some help from the city government.

During a special meeting Wednesday, the City Council will consider a resolution of intent to support the project. It will also start the lengthy process of using tax increment financing to give the developer up to $10 million to reimburse it for buying the property and demolishing the buildings.

A maximum of $18.2 million could be given to the developer over the course of the project.

City Manager David Fierke said the project would be impossible without help from the local government.

“The city’s got to come in and make this thing work,” he said.

All of the money for the developer would come from tax increment financing, often called TIF. Tax increment financing occurs when increased property tax revenue from an existing area is set aside to be reinvested in that area. That means the financial aid being considered for the mall site will not come from the general fund that pays for essential services like police and fire protection. It also will not cause residents’ property taxes to rise.

In September, the council made the site eligible for TIF by adding it to the Center City and Industrial Park Urban Renewal Area.

Mayor Matt Bemrich said he believes the proposal for the mall is exactly the type of project that state legislators envisioned when they wrote the law allowing TIF to be used for urban renewal. He said the TIF money will be used to acquire the property and tear down the buildings, which clears the way for a project that will create new tax base. That new tax base, he said, will facilitate the financing of the acquisition and demolition.

“The taxpayers aren’t funding the project,” he said.

“To me, this is absolutely the perfect piece of land to show how TIF is supposed to be used,” he added.

The future of the site

Crossroads Plaza Development LLC plans to buy the old Sears store from Blessing Enterprises, of St. Charles, Missouri, for $1,435,000. The deal is to be concluded by Jan. 1.

Fierke said the building will be demolished by the end of this year.

The firm will also buy the mall from its current owners for $3.3 million before March 1. The mall will remain open until the stores currently there can make plans to move. Then it will be demolished.

The new plan calls for 11 retail buildings of varying sizes on the lot. There will also be six structures that have been labeled mixed use. They will have businesses on the first floor and apartments on the second floor.

The biggest building on the site will be a five-story, 110,500-square-foot hotel.

A green space with a feature like a large fountain will be in the middle of the site.

A new section of South 27th Street will run through the site from north to south. It will be a publicly owned street.