-Messenger photo by Elijah Decious
Many shelves inside Manson’s last grocery store are bare as it wraps up its final days of business. Everything inside Heartland Market is 40% off until closing, scheduled for Sunday.

-Messenger photo by Elijah Decious
Heartland Market of Manson’s last day open will be Sunday, if utility bills are paid to stave off MidAmerican Energy. Employees said MidAmerican Energy attempted to shut off the store’s electricity Thursday, but the utility company has given owner Nick Graham until 6 p.m. today to make payment. 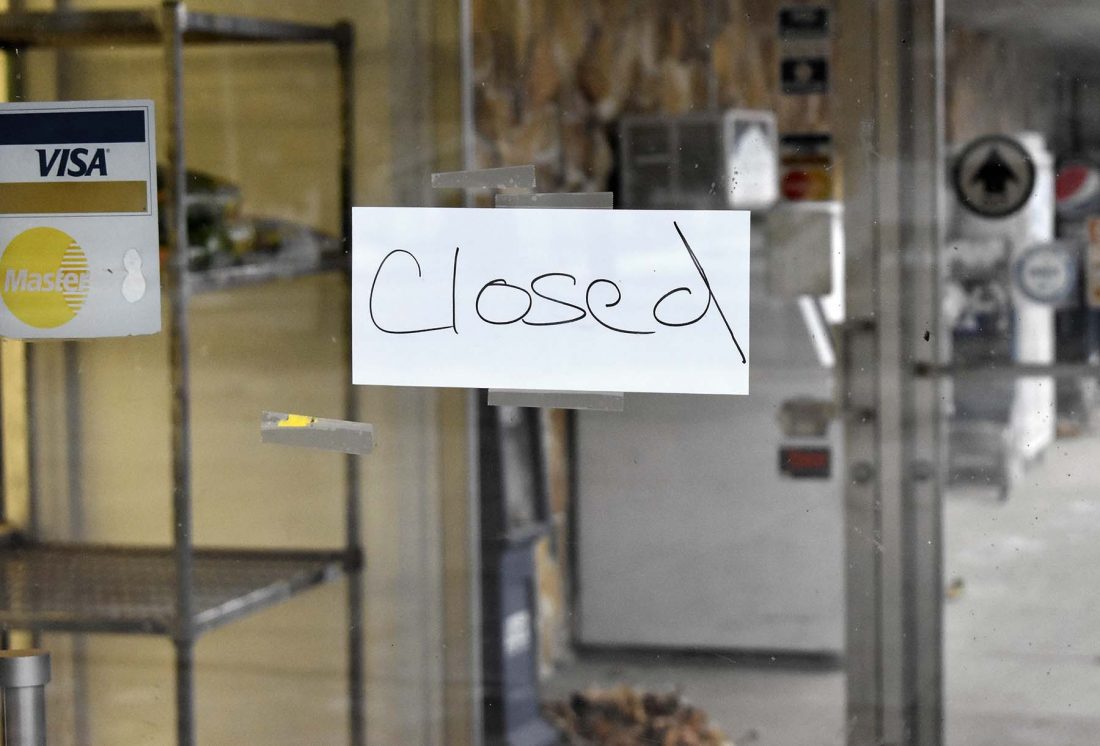 MANSON — Grocery shoppers are making their final purchases at Heartland Market this week, as Manson’s only grocery store closes. The market that has been a fixture of the town for several decades will be closing at the end of Sunday, barring the possibility of the electricity being shut off early.

Employees were notified of the store’s closing with a note slipped in their paychecks on Friday.

Store Manager Amanda Dahl told The Messenger that MidAmerican Energy attempted to shut off the store’s electricity on Thursday due to nonpayment of utilities and inability to reach the store’s owner, Nick Graham. She said the store was able to stave off the early shut down, giving Graham until 6 p.m. Friday to make a payment that would keep the lights on.

Though she’s sad the store is going, she’s more upset about the employees who will be losing their jobs with very little warning before the holiday season. 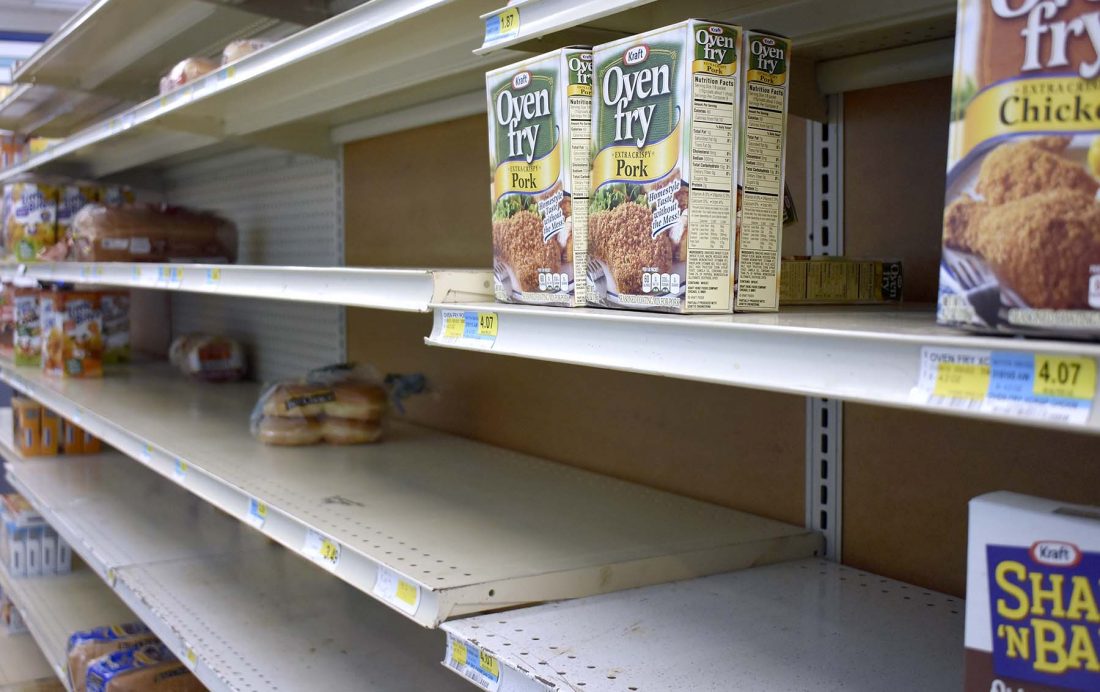 -Messenger photo by Elijah Decious
Many shelves inside Manson’s last grocery store are bare as it wraps up its final days of business. Everything inside Heartland Market is 40% off until closing, scheduled for Sunday.

“It’s just not fair,” she said. “It disgusts me. It could have waited until after the holidays.”

Dahl said she “couldn’t even tell you” the last time she saw the owner. Graham did not return multiple calls from The Messenger seeking comment.

Some customers were just as upset that their only grocery store will be closing, forcing them to drive to Fort Dodge.

He worries about the elderly and disabled who can’t drive long distances to get groceries. 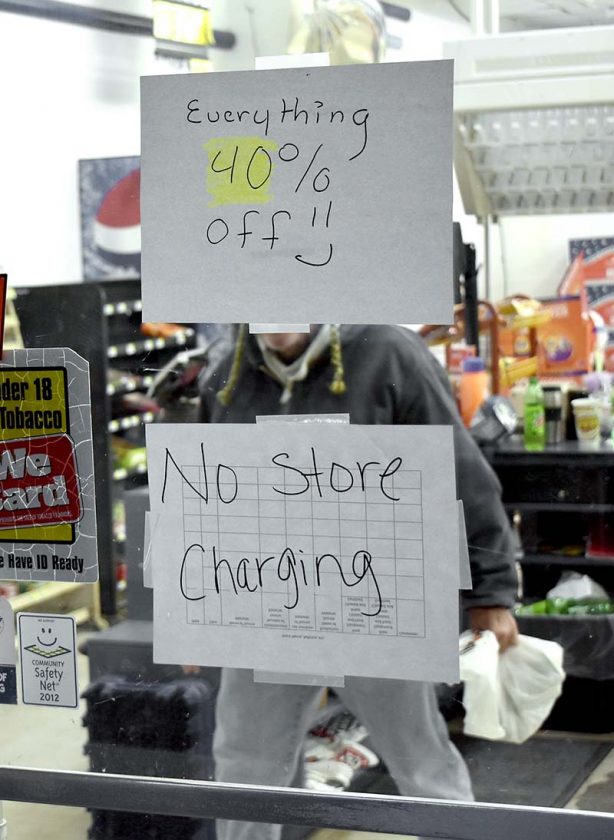 -Messenger photo by Elijah Decious
Heartland Market of Manson’s last day open will be Sunday, if utility bills are paid to stave off MidAmerican Energy. Employees said MidAmerican Energy attempted to shut off the store’s electricity Thursday, but the utility company has given owner Nick Graham until 6 p.m. today to make payment.

As the store liquidates what remains on its sparsely-stocked shelves at a 40% discount, the grocery store’s oldest and longest-serving employee, Gordon Hans, laments the end of an era.

Hans has been working at the store since 1963, when it was called Duggar Super Value. He was the manager of the meat counter for decades, even as the store changed hands, until his retirement from full-time work 13 years ago. Since then, the 83-year-old has worked part-time doing various tasks like stocking the dairy shelves.

“When my wife was old enough to get Medicare insurance, I thought we’d have a little down time,” Hans said. “But you can only have so much of that.”

He said the interactions with people he saw every day there encouraged him to continue working. In some Manson families, he served five generations over 57 years at the store.

And that’s what he’ll miss most.

“That’s the first time I’ve seen him cry,” said Dahl, recalling when Hans learned the store was closing. She has been a manager at the store for six years.

Hans, a Lakota, Iowa, native moved to Manson after graduating high school and serving in the Coast Guard. When he moved to Manson, there were five grocery stores in town, even at a time when the population wasn’t much larger.

“It was all family-owned stores that took care of each other,” said Steinberg, who also remembered that time, when shoppers would hop between all the stores to take advantage of the best sales at each one.

Now, the only quasi-grocery store left will be a Dollar General, which doesn’t carry fresh produce or meat. Steinberg said the store isn’t “nearly as personal” as the Manson grocery store.

Mayor Dave George said he had “no doubt” the relatively new Dollar General, on the edge of town, had some impact on the grocery store with direct competition on some items.

“It’s kind of disappointing to see things turn out like they have,” Hans said. “Time marches on, nothing stays the same forever.”

The town he once knew has changed in many ways, but the store he spent most of his life’s career in was not a change he wanted to entertain as a possibility.

“It’s going to be tough for a lot of people,” he said.

Many saw the writing on the wall with various signs. Dahl said she first heard rumors of the store closing about six months ago, but did not know anything official until Friday’s note. That note was supposed to be a two-week notice, but even that advance warning is being cut short.

The manager said the owner stopped ordering liquor, and some issues around the store went unrepaired as maintenance seemed to become less of a priority.

Dahl said the health inspector had been giving the store warnings every two weeks, starting about three months ago, for items like broken ceiling tiles in the kitchen.

“It won’t be good, obviously,” for the health of the small community, said Mayor-elect Dave Anderson. “A grocery store is a pretty vital part of the town.”

He agreed that the signs were there, though.

“You could see it coming,” he said.

Both Anderson and George said the city would do its best to keep options open as it brainstorms on how to either make a last-minute aversion to the closing or try to attract another grocery store to town. The store’s building is locally owned, which may make it easier to fill the vacancy.

“There’s going to be a concerted effort to come up with something that can fill that business for our community,” said George.

He said Manson City Council had an inkling the store would be closing after they received a letter from Graham notifying them that the store was in danger of going out of business. Manson’s economic development director has been meeting with him in hopes of finding a way to avert the closing.

But as a bedroom community to Fort Dodge, Anderson said that task may be easier said than done, even with a concerted effort from a community with a strong coalition for economic development. When most residents work in Fort Dodge, it can be a challenge to encourage residents to do 100% of their grocery shopping in Manson.

“I can’t say that I always bought my groceries in Manson,” Anderson said. “I don’t think there’s anybody that can.”

The retail business can be tougher for stores in small towns close to Fort Dodge, but the mayor-elect said it’s hard to tell which straw broke the camel’s back in this case.

“There’s all kinds of incentives,” to be looked at with Manson’s economic development group, he said, telling The Messenger that strengthening infrastructure will be a priority as he takes office next year.

Graham became the youngest grocery store owner in the country in 2006, when he purchased his first grocery store at age 17. The owner of Heartland Markets purchased the store in Manson in 2017, when it was owned by Affiliated Foods.