-Messenger photo by Hans Madsen
U.S. Army veteran Ken Tuel looks over a card his granddaughter, Stella Bice, 4, gave him after he was awarded his Purple Heart. 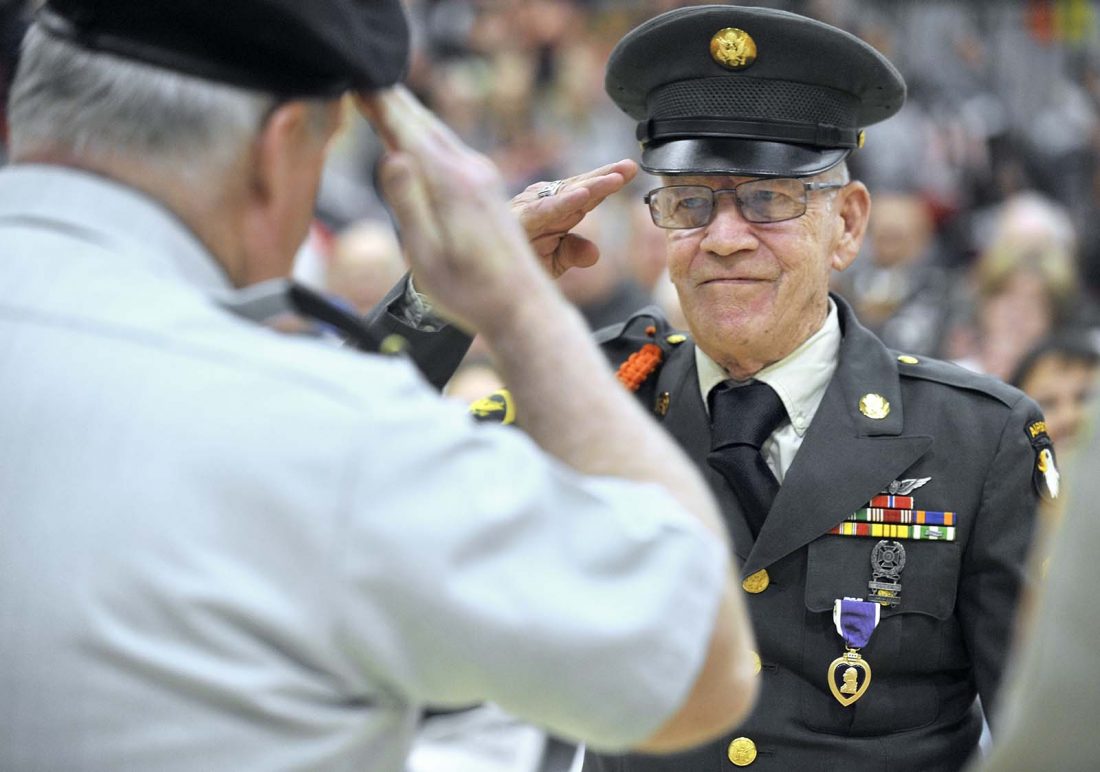 The Fort Dodge veteran was injured while serving as the crew chief on a Huey helicopter in Vietnam. The craft’s tail got hit by a North Vietnamese Army mortar while it was hovering. The crew was off loading ammunition to troops on the ground.

It crashed and burned.

Of the six on board, three died.

On Friday afternoon, Tuel finally received the Purple Heart that he should have gotten 52 years ago for his combat injuries. He received the honor during the annual Veterans Day celebration at Fort Dodge Senior High. 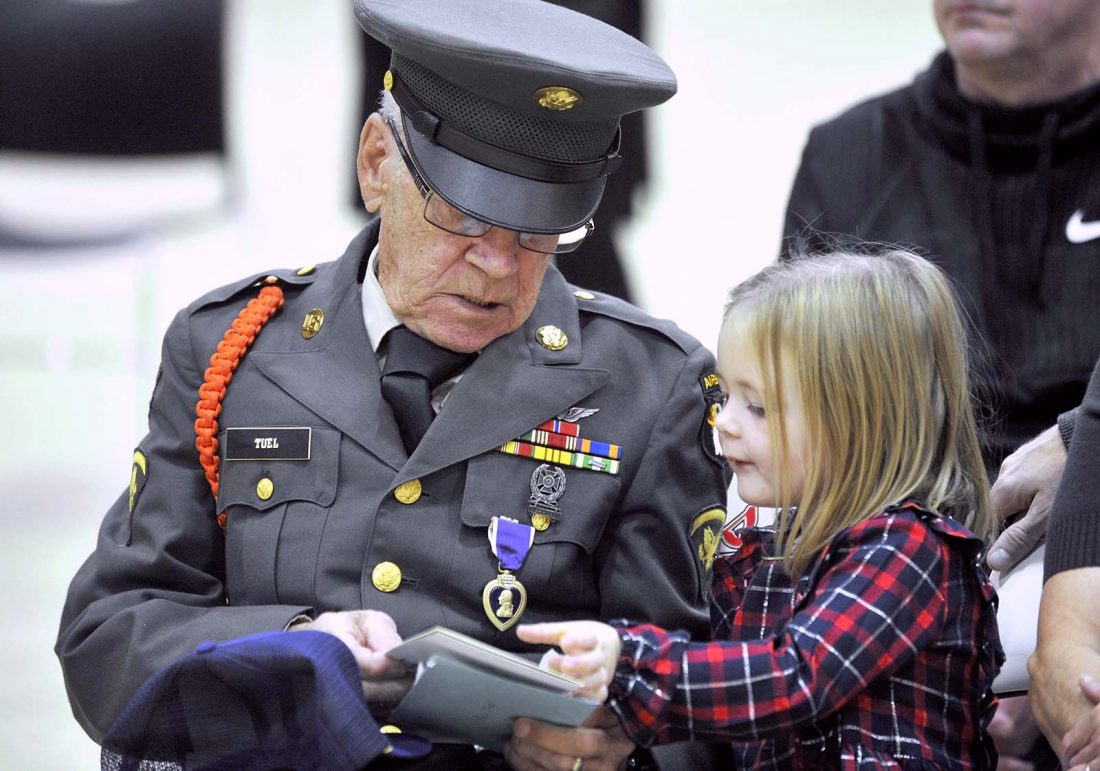 -Messenger photo by Hans Madsen
U.S. Army veteran Ken Tuel looks over a card his granddaughter, Stella Bice, 4, gave him after he was awarded his Purple Heart.

Iraq and Afghanistan veteran Chris Weiland read his biography. At the end, the bio explained why the medal was overdue.

“Initially the incident was recorded as pilot error,” Weiland read. “Based on eye witnesses in the immediate vicinity, the case was reopened and it was verified the downing of the aircraft was due to a mortar round.”

“Upon the determination that the incident was in fact due to direct enemy actions,” he continued. “The acting secretary of the Army approved the issuance of the Purple Heart to Specialist 5 Kenneth R. Tuel in September of 2019.”

His family set in the front row, pride on their faces as Lennon pinned it on the uniform Tuel can still fit. The two men saluted. 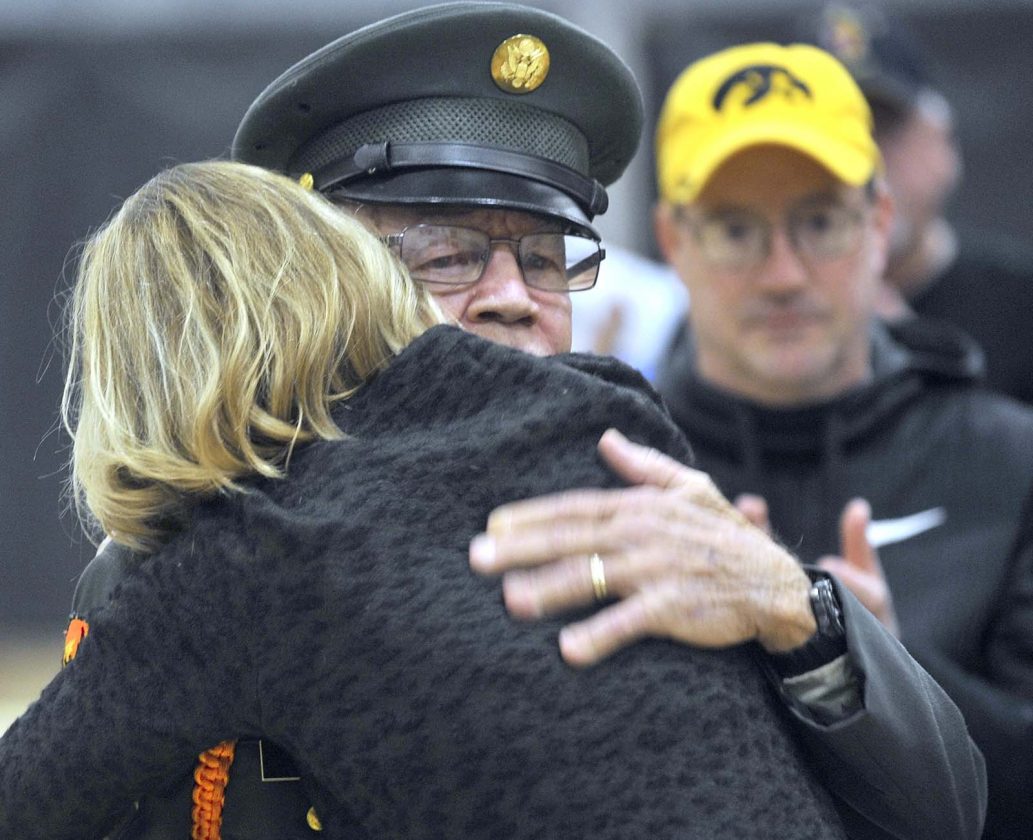 His daughter, Jodie Bice, got a big hug.

“It’s really hard to put into words,” she said. “The last 36 years of my life I didn’t quite realize the magnitude of what my dad went through.”

“I’m very, very proud,” she said. “I’m extremely proud and grateful that he finally got his recognition.”

Tuel’s thoughts were on others.

“I just want to thank everybody for coming,” he said. “All our veterans.” 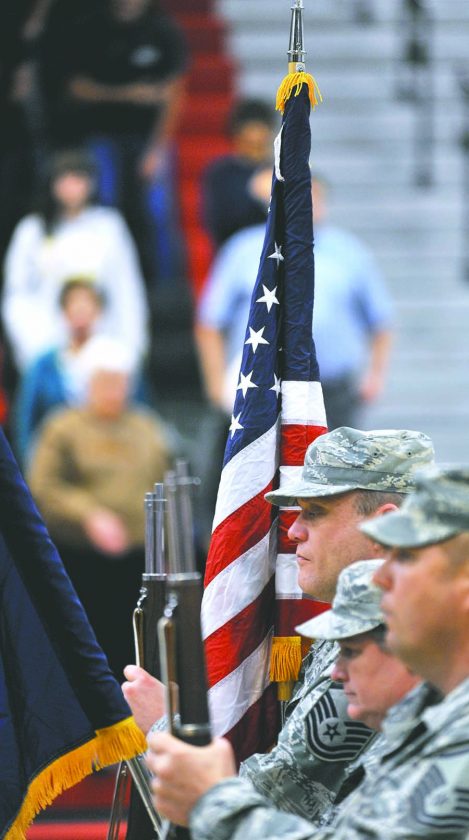 Tuel is in contact with the other surviving crew members.

“They’re trying to get a Purple Heart for the rest of the group,” he said.

Lennon spoke before the presentation of Tuel’s Purple Heart.

“Veterans Day is to recognize all those who served this great nation,” he said. “Especially those veterans who are with us today.”

The program also included a question and answer session, many of the veterans got to tell the audience of students and staff why they joined or why they choose their branch of service and what they did. 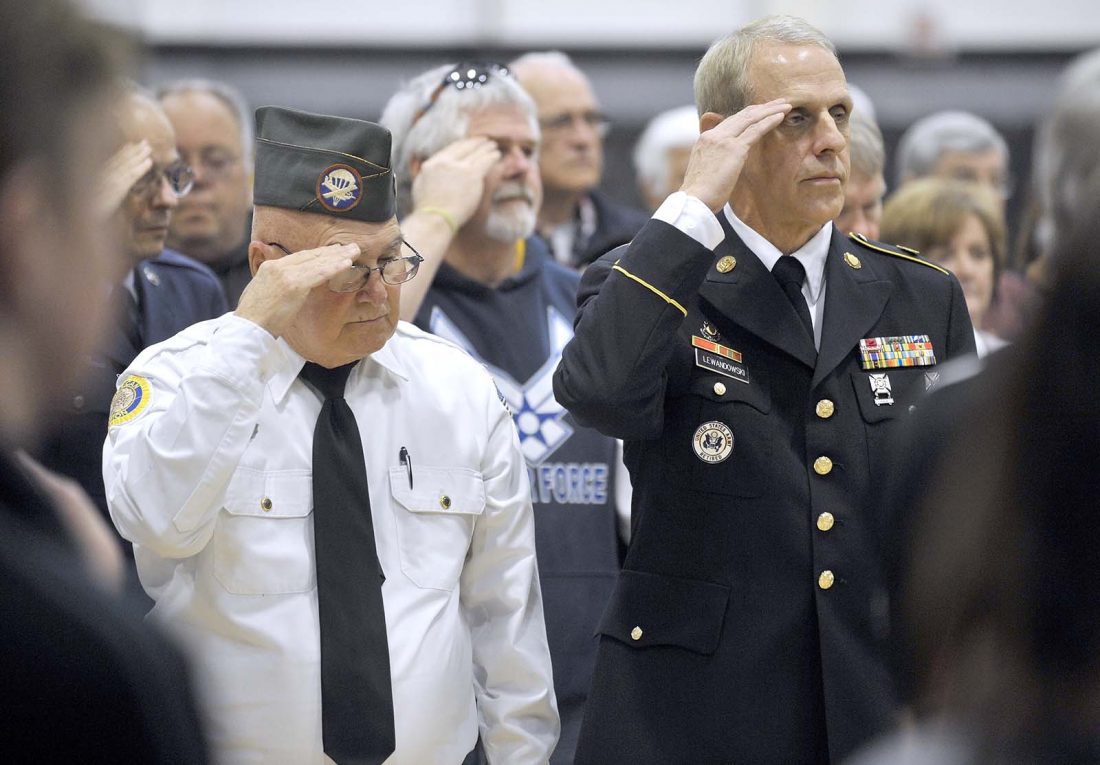 It was a diverse group of men and women.

There was a nurse, infantrymen, an accountant, someone who served in the Pentagon and White House. Some who joined the Navy to avoid the Army or the Army to avoid the Navy and one veteran who just wanted to see something other than Iowa.

They all had one thing in common, regardless of the their story.

“The No. 1 question for you students today,” he said, “if your country called you, what would you say?”

He emphasized the reality of what the veterans went through when they had answered the call.

“The reality for them is that they may come back in a coffin with a flag draped over them,” he said.

He had another issue to address.

“We have to make it right,” he said. “Especially for our Vietnam veterans. It’s taken us 50 years as a country to understand what they went through. Our society shunned them. It’s not just Nov. 11 … it’s every day. Be proud to be an American every single day.” 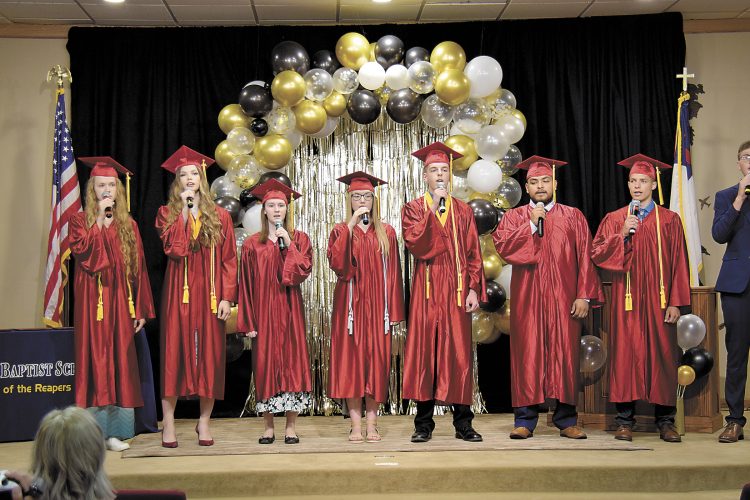