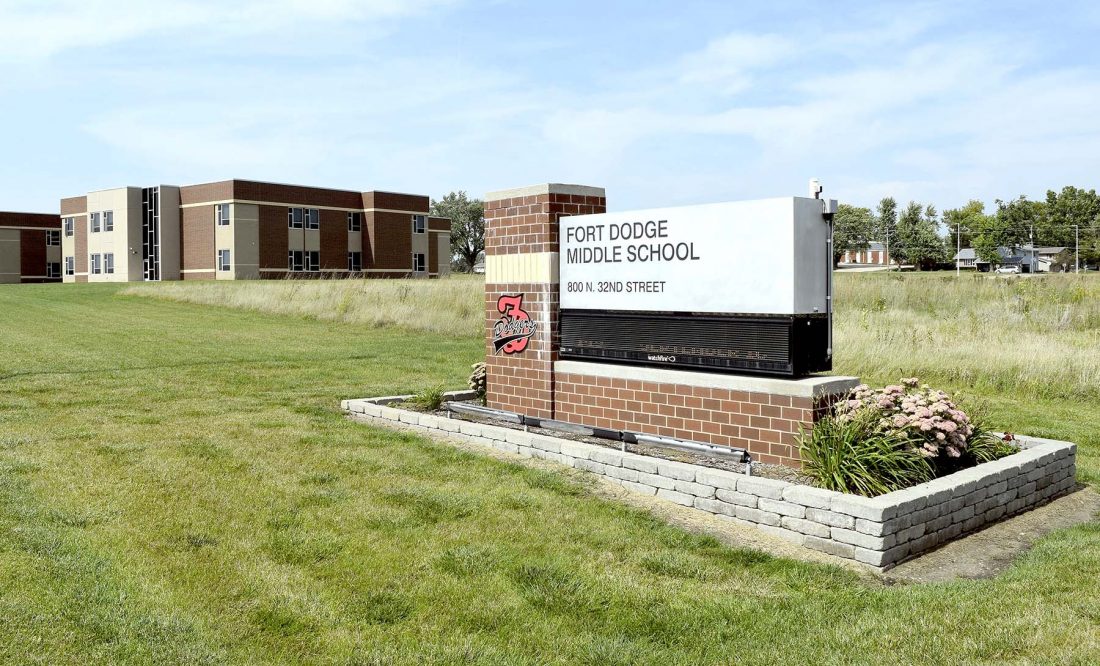 The Fort Dodge Community School District Board of Education is considering a proposal that would move the district’s fifth-grade classes down from the middle school level to the elementary school level.

If implemented, the changes proposed by FDCSD Superintendent Jesse Ulrich during a board workshop meeting on Monday evening could potentially take effect as early as the 2021-22 school year.

The proposal includes considering the conversion of the Central Administration Building at 104 S. 17th St. back to its former use as an elementary education space. The facility, the former Arey Elementary School, could be a Kindergarten Campus or a Fifth Grade Academy, which Ulrich said is a decision that doesn’t need to be made at this phase.

“We believe that the fifth grade needs to be in a more developmentally appropriate environment than it currently is in,” Ulrich told the board. “We also have a need to align the curriculum for better achievement. Most curriculums we utilize now with the new literacy standards and new math standards, the grade span is grades third through fifth.”

Ulrich has talked with building principals, and they all support the grade reconfiguration proposal, he said.

“I don’t have a single administrator who thinks the fifth grade should be in middle school,” Ulrich said.

Ulrich provided the school board members with several studies that support the philosophy that fifth grade should be an elementary grade.

“We could not find a study that said fifth grade should be at the middle school,” he said.

During Monday’s meeting, none of the school board members shared any opposition to the proposal to move fifth grade to elementary school, and a few voiced support for the idea.

“I think it solves a number of problems,” said school board President Stu Cochrane.

With the proposal Ulrich brought to the board on Monday night, the district will not need to add additional square footage to its facilities, but rather will repurpose and renovate existing facilities.

About a year ago, the school district bought the old Hy-Vee building at the intersection of Second Avenue North and 25th Street. This facility currently sits empty. Ulrich’s proposal would have the building renovated to be used as a new site for the district’s central administration offices. With the administration out of the old Arey school, that building would be renovated and recommissioned back into a school building.

The administration, in preparing its proposal, had also looked into the option of constructing additions to the four current elementary school buildings to accommodate the new fifth-grade classes.

Ulrich said the district found that it was more cost-effective to renovate current facilities than to construct new facilities or additions.

“Not adding square footage, but using existing space is more efficient,” he said.

“What we’re proposing here, nothing would affect property taxes via general obligation bond,” he said.

Another aspect of the proposal is to make Butler Elementary School, 945 S. 18th St., and Cooper Elementary School, 2420 14th Ave. N., each “three-section” buildings, meaning they would house three classrooms for each grade in order to resolve building capacity issues the district has faced in recent years and allow the elementary school boundaries to remain the same.

“Two years in a row, the elementary boundaries have resulted in being over capacity at the Cooper building,” Ulrich said. “We’re trying to prepare our facilities for growth, when and if it occurs within our district. When you’re looking at boundaries, it’s obviously the logical time to look at grade reconfiguration as well.”

The school board will continue to discuss and consider the proposals.

A public hearing on these proposals will be held during the Sept. 23 school board meeting, which will start at 6 p.m. at the Central Administration Building.