Receives Volunteer of the Year Award 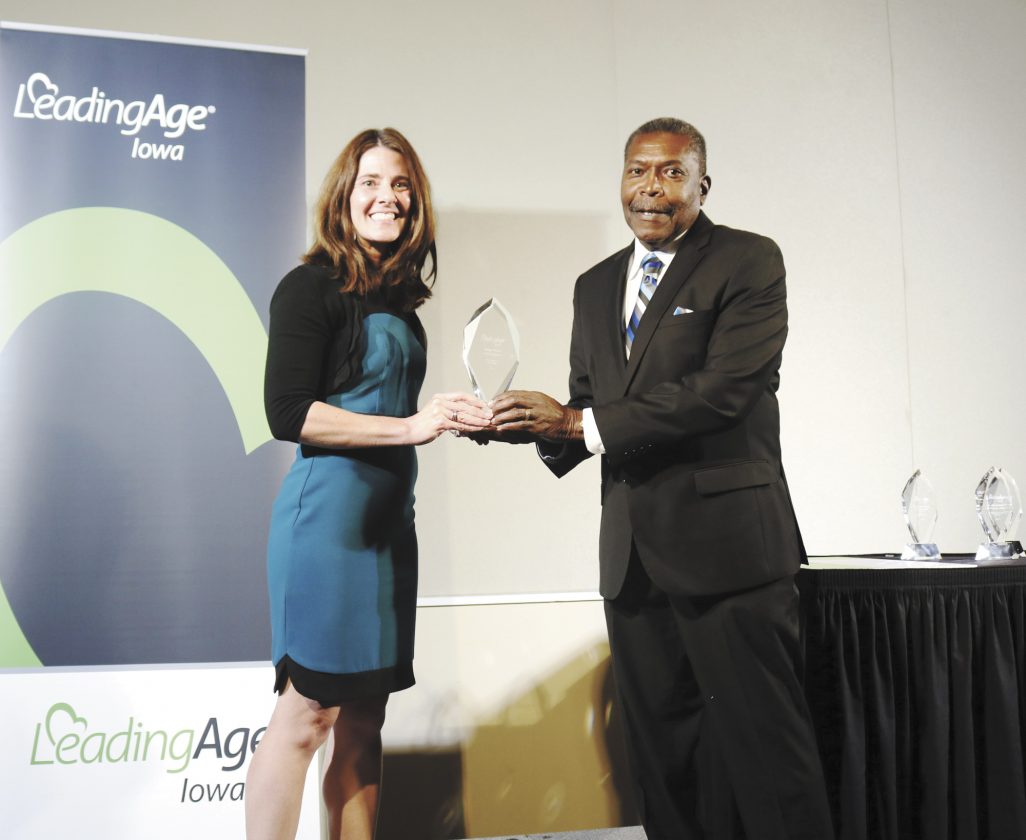 Like most volunteers, Judge Brown sees time spent at the Friendship Haven retirement community in Fort Dodge as a way to help others in need.

In return, Brown knows he’s been filling a void in his own life.

The 72-year-old Brown was recognized earlier this month as the LeadingAge Iowa Volunteer of the Year at a banquet in Cedar Rapids. The long-time local educator is in his 12th year of providing assistance for the Sunday morning worship service at the Tompkins Celebration Center — work that serves both a literal and figurative purpose for campus residents and Brown himself.

“I’ve always really enjoyed being around older people for as long as I can remember,” said Brown, a former teacher in the Fort Dodge Community School District and instructor at Iowa Central Community College. “I think it’s because I didn’t have my own grandparents around much when I was growing up. As a younger man, I never had that opportunity to sit around and drink coffee and talk about things with people who have experience and wisdom on their side.

“I hear all kinds of interesting stories when I’m at Friendship Haven. It’s a wonderful crowd. You know, they’re at a stage in their lives where they’re just thankful for every day they’re given. They don’t have personal agendas. They’re not trying to be something they aren’t. It’s just a very simple, pure perspective. I appreciate the relationship I have with those folks so much, and have ever since I started there.”

A native of Bethel, North Carolina, Brown accepted a social studies position at Fort Dodge Senior High in 1977. The Bethel Union High School and North Carolina Central University graduate taught for nine years at FDSH, then served a term and a half on the FDCSD’s school board.

Brown worked at the Fort Dodge Urban Ministry and with the Department of Education in Des Moines before being recruited to teach at Iowa Central by then-president Dr. Bob Paxton. He was a full-time instructor there from 2003-2007, but taught online courses through Iowa Central from 1998 until 2017.

“I come from a working-class community. My dad was a sharecropper (in North Carolina),” Brown said. “So I grew up in a labor-intensive environment.

“I decided in fourth grade that I wanted to be a teacher. They got to dress up every day for work. They got a paycheck every month. They didn’t have to go through the physical struggles and uncertainty that people like my dad did. I thought to myself, ‘I’d like to do that.'”

In addition to being a life-long teacher and learner, Brown always stayed active with a wide variety of boards and committee assignments. He spent 10 years as a member of the Commission on the Status of Women (CSW), where he was appointed during one of Iowa governor Terry Branstad’s terms and continued under Tom Vilsack’s tenure. Brown also served for U.S. Sen. Tom Harkin, D-Iowa, and U.S. Rep. Tom Latham, R-Iowa, as an interviewer for military academy students.

“I always enjoyed being asked to help with commissions and other (comparable endeavors), and my experiences covered a wide range (of backgrounds),” Brown said. “The Commission on the Status of Women fit me well because I grew up around influential women. I was fortunate enough to have a strong mother who didn’t take any stuff. The (CSW) has always been a great service addressing many pertinent women’s issues. We even visited women’s prisons. It does so much to uplift the status of women.

“Interviewing students for the military academy was always a joy and a highlight for me. Very eye-opening and impressive. Getting a chance to see these 18-year-olds who really had a maturity and leadership about them and had everything together — I always applauded their passion.”

Brown was a long-time cog in the judicial district nominating process until two years ago.

“I’d sit down and interview candidates, asking why they wanted to become district judges,” Brown said. “It was more about who they were as people; I wanted to go beyond their resumes. And the word got out that you couldn’t ‘josh’ Judge. I wanted them to tell me something about themselves beyond their degrees and professional backgrounds. Show me your merit.”

Known for his gregarious personality and magnetic demeanor, Brown first starting visiting Friendship Haven on a regular basis after entering full-time retirement in 2007.

“A lady that used to come to our church and help out was living there with her husband,” Brown said. “I would visit her on Sundays, and she invited me to church (on the Friendship Haven campus). I noticed that as I was taking her down in her wheelchair to the service, there were a lot of (residents) who needed help. So it just became a part of my life and a routine for me to be out there every Sunday. And the rest, as they say, is history.

“If I do happen to miss a Sunday for whatever reason, I hear a lot of ‘We missed you, Judge!’ comments the next week. I can’t tell you how much that means to me.”

Brown then added with a smile, “You know, they’ve tried to recruit me as I get older. There are so many people I taught with through the years, as well as former students who have parents out there. I’m definitely a part of that community and I’m thankful for that, but I’m not ready to be there full-time yet.”

Brown admitted he was “completely shocked” to hear he’d been nominated for the LeadingAge Iowa volunteer honor by Friendship Haven president and CEO Julie Thorson, Rev. Jennifer Owen, and the Friendship Haven residents and team. Brown was “even more surprised when I was selected for it.”

“Of course, when I read the letter written by Pastor Jennifer … it was quite the pitch. That woman could sell swamp land in Arizona.”

After a quick laugh, Brown added, “in all seriousness, this was very generous of the people at Friendship Haven to think of me in this light. I didn’t even know there was an award of this kind. Obviously I don’t volunteer there for the recognition, but I was incredibly flattered.”

“He is here primarily on Sundays helping to bring residents from their apartments/rooms to and from our weekly worship service. He knows where residents like to sit whether it is to better hear the pastor, sit with special friends, or to best hear the piano and organ playing. As a resident told me, ‘Worship wouldn’t happen without him here.’

“Judge Brown exemplifies Friendship Haven’s vision, ‘People living full lives with faith, passion and purpose.’ Judge creates home for not only the residents, he creates home for himself as well. As one team member said, ‘He’s part of Friendship Haven’s family.’ Judge exemplifies the best characteristics of a model volunteer; and, by his example, he encourages and challenges others to live full lives of faith, passion and purpose. Not only does Judge lend a helping hand, his presence energizes any room he enters, his interest is genuine and loving, and his endearing smile is a reminder that we’re all family at Friendship Haven.”