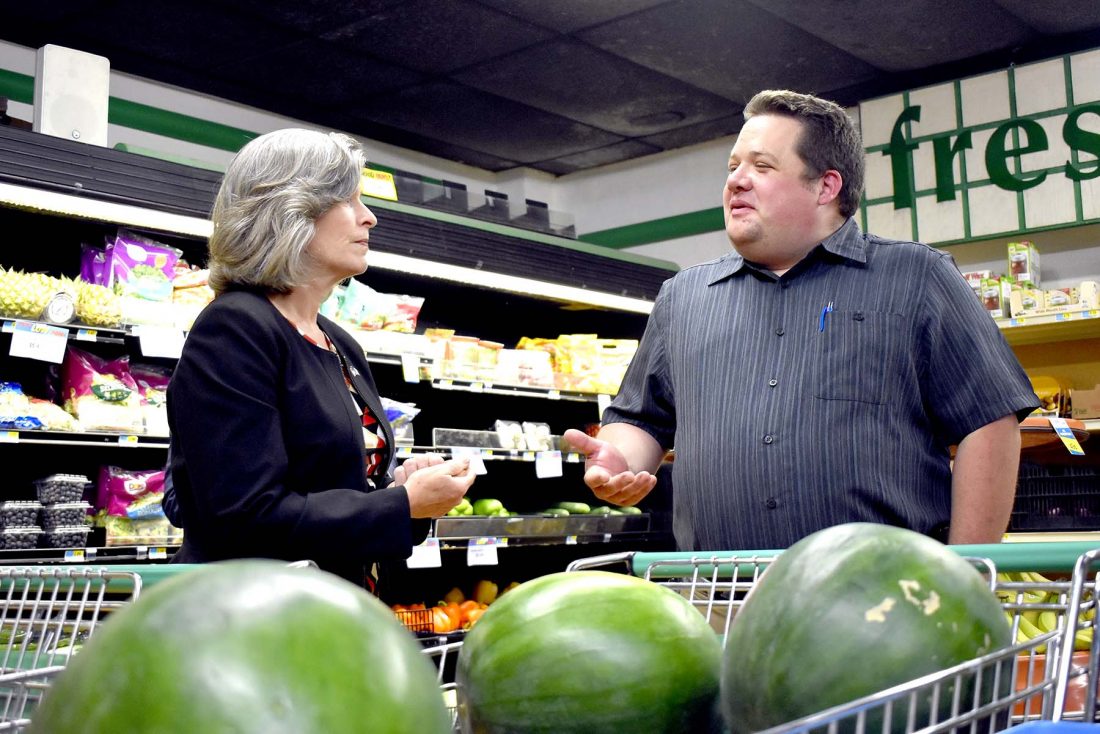 The Red Oak Republican toured the small grocery store, kept alive by owner Nick Graham, learning how grateful those in Gowrie and nearby communities were to simply have a grocery store. The nearest one outside Gowrie is a 30-minute drive in any direction.

“Economic development is huge,” said Graham, who took the junior senator on a tour as shoppers picked up marshmallows, milk and whiskey to take through her line before her shift was over.

“Every time 40 kids graduate and 20 kids enroll in kindergarten, you have more pressure,” he said, noting that broadband connectivity and a more decentralized local food production were big priority items for his business.

The grocer comes from a heritage of “farm to table” food production. His grandparents raised three children on a 160-acre farm starting in the 1950s. 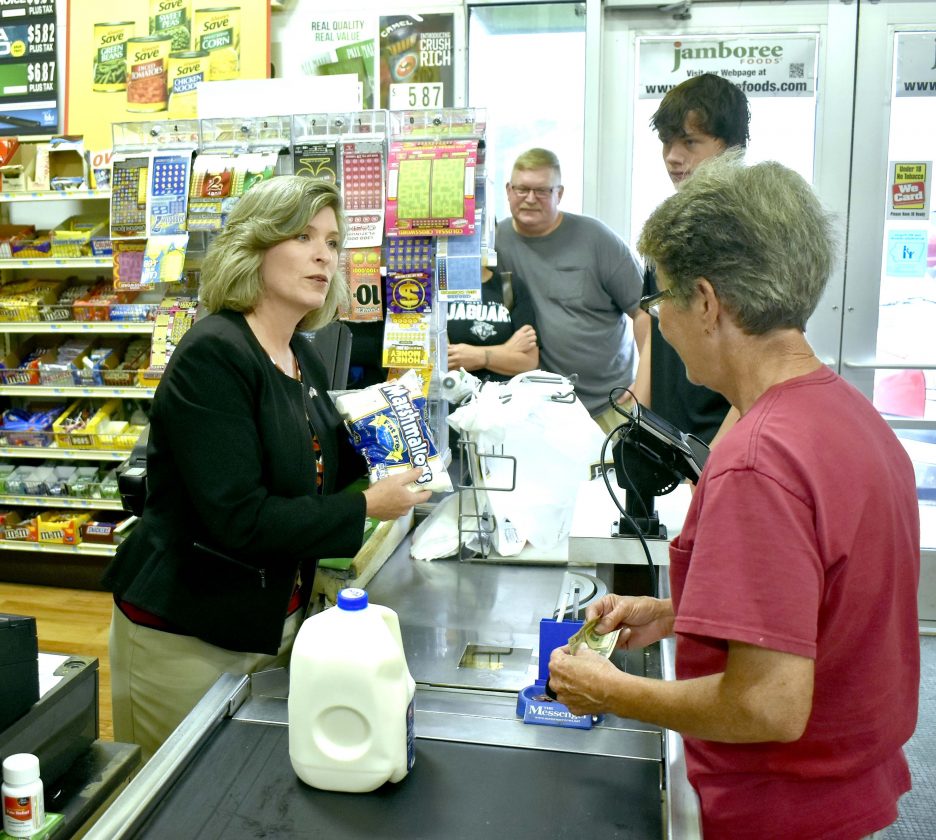 Now, Graham sells that food at retail in a world where farms that small are a rarity.

“By the time they retired, they owned the entire section and there were no children living in it,” he said, noting that the mass vertical integration seen in food production industries “certainly doesn’t bode well for Main Street.”

And in the country with the most efficient food production system, he notes the irony.

“What’s been so good for America from a food production system standpoint hasn’t been good for rural communities,” he said.

Ernst noted the pain of the farmer right now, in the midst of a continually escalating trade war with China that has removed access to critical pork and soybean markets for the biggest pork and one of the biggest soybean producing states.

“I just want to know when it will end,” is what one farmer asked Ernst, noting how painful it had become, even with Market Facilitation Program payments.

Ernst has previously said on the record that farmers want “trade, not aid,” and that President Trump has asked her a few times this year to relay to her rural constituents the importance of patience as the two countries wait out the impasse with the Asian country she calls a “dirty player,” in trade negotiations.

As summer inches closer to harvest season, she was still unsure of when it would end, only offering her hopes that it would end soon.

“I’m hopeful,” she said, that the U.S. can revive lost markets for soybean and pork exports as China has moved on to other countries like Argentina and Brazil to fill their need in the mean time — a move she calls a “show game” on their part.

“Again, hopeful,” she noted with concerns about ground gained in South America as the two countries increase their bushels per acre of production. “I think we can.”

Ernst said the ball is in the lower house of Congress as the Senate waits for House of Representatives Speaker Nancy Pelosi, D-Calif, to commit to bring the U.S.-Mexico-Canada Agreement to the floor.

“That trade agreement has to start in the House,” the senator said.

While that battle plays out, the 2020 campaign season nears, and with it the political ads.

Ernst said her Democratic opponents will continue to focus on her stance with pre-existing conditions, and wants to set the record straight.

“It’s important for folks to understand that I have family members with those conditions,” she said. “I would never want to take away their opportunies to have reasonable, quality insurance afforded to them.”

While she has opposed the Affordable Care Act, the health care overhaul passed under the Obama administration that made it illegal for insurance companies to deny coverage to those with pre-existing conditions such as juvenile diabetes or autism, she said her opponents fail to highlight her record sponsoring legislation that would keep that protection.

Preceding the campaign trail have been comments by U.S. Rep. Steve King, R-Kiron, the 4th District congressman who has come under fire yet again for saying that humanity might not exist but for the occurrences of rape and incest throughout history, defending his stance on abortion that would not permit exceptions for the procedure in such situations.

“Never OK,” Ernst told the Messenger of his comments, which she previously characterized as distracting from getting real work done.

As the GOP incumbent faces another matchoff in 2020, two years after 2018 Democratic opponent J.D. Scholten got within three points of beating him in a district with dramatically more registered Republicans than Democrats, Ernst declined to endorse any of King’s GOP primary challengers.

Short of endorsment, she asked voters to carefully study the qualifications of every one.

“I encourage them, look at the qualifications of all the people in the race,” she said, noting she has concerns that a Democrat could take back Iowa’s deep red stronghold.

A Saturday town hall meeting in Johnston didn’t yield as warm of a reception as the meet and greet in the checkout line this week.

“So my question for you today senator is when can I plan to get back to trainings that simply teach children to read and write?” asked teacher Ellie Holland.

Ernst emphasized the need to improve mental health care, to which the audience fired back.

“We’re short congress people to take action,” yelled one man in the crowd.

Ernst told the Messenger Wednesday she simply hopes there’s room for compromise on legislation that would still ensure access to firearms for “law-abiding citizens,” noting background check loopholes as an area for progress.

Ernst showed qualified support for “red flag” laws, which she had previously expressed concerned about. Red flag laws would allow family members to petition courts for removal of firearms from an owner seen to be a risk to themselves or others.

“I would caution that it has to have due process,” she said, noting that a medical professional who has evaluated the individual in question must be the one advising a court to take such an action. “They need to be qualified to make that determination.”