The moment that shaped SCC Class of 2019

-Messenger photo by Peter Kaspari
Riley Snyder, a 2019 graduate of South Central Calhoun High School, did it all for her dog, according to her decorated mortar board. 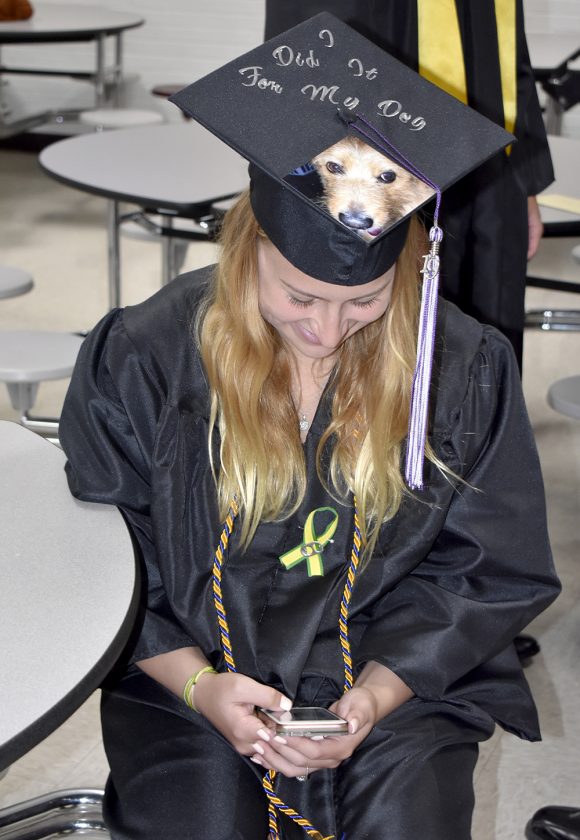 -Messenger photo by Peter Kaspari
Riley Snyder, a 2019 graduate of South Central Calhoun High School, did it all for her dog, according to her decorated mortar board.

LAKE CITY — Austin Olberding told his fellow South Central Calhoun High School graduates that he and his classmates didn’t realize it at the time, but they were a part of history eight years ago.

That’s because, when the class of 2019 was in fifth grade, the Southern Cal and Rockwell City-Lytton school districts announced their consolidation into what is now South Central Calhoun.

“This was the moment that determined who we would be,” Olberding, who was one of two seniors who addressed the graduates Sunday, said. “This moment shaped our paths to create the school we are today.”

Olberding was one of 61 graduates at South Central Calhoun High School Sunday.

In their time at South Central Calhoun, Olberding said the students have experienced triumphs and defeats. 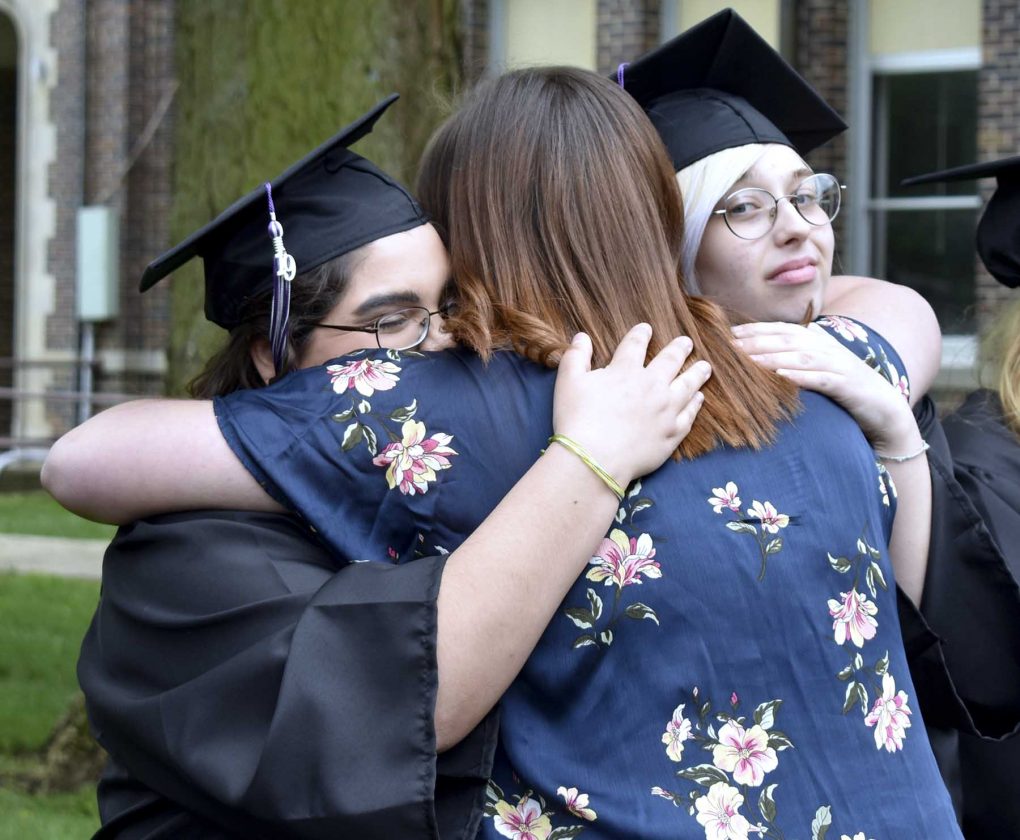 “Through everything we have prevailed, and we have overcome,” he said. “Through failure we have found success, and that success has gotten us to where we are today.”

He challenged several groups of students. For the underclassmen, he challenged them to take advantage of everything that comes their way, because high school goes by fast.

“Take the opportunity, because you might never get the chance again,” he said. “Live your own life, not somebody else’s.”

He also challenged the graduates to be thankful for everyone who pushed them to succeed, including themselves. 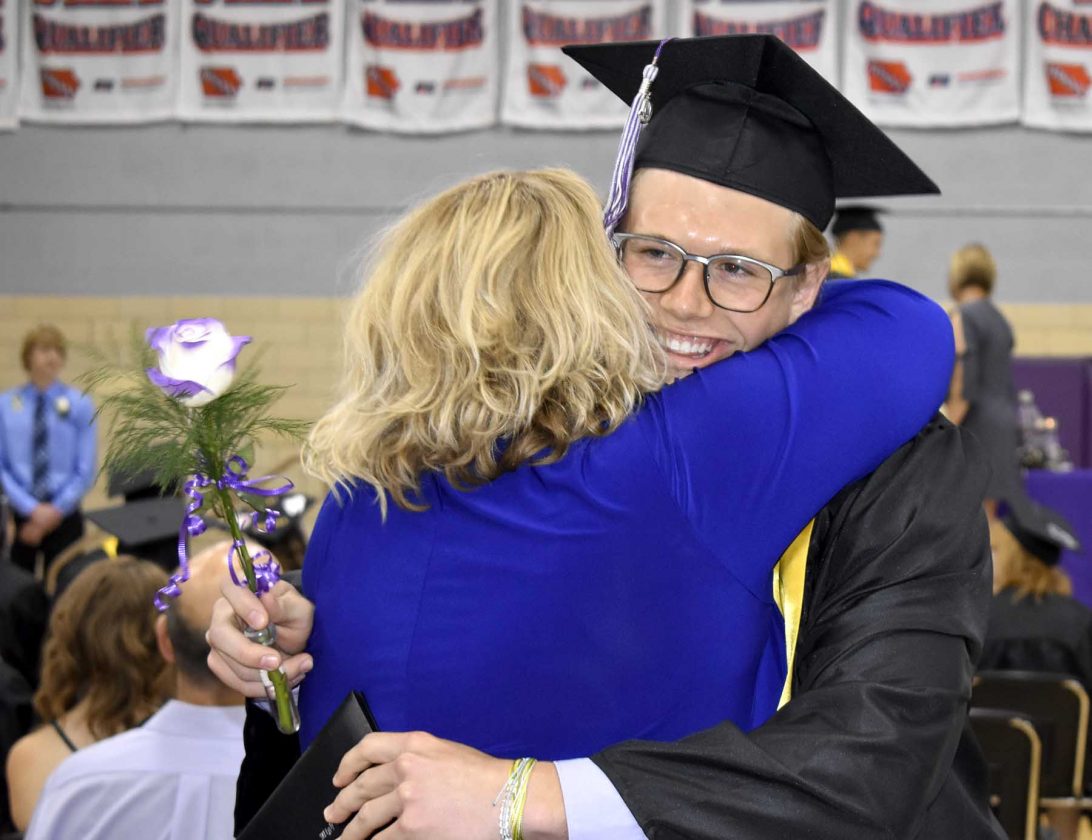 Olberding reminded the parents to thank their graduates, and also thanked the faculty, staff and administration for all their encouragement over the years.

“Through your guiding light, we have come far from the little fifth-graders we were when we first met,” said. “Today, we are 17-, 18- and 19-year-olds, prepared to graduate and enter college or the workforce. We would not be here today without you.”

He told his fellow graduates that they can make a difference.

“This is our moment to show the world what we’re made of.”

Senior Jerika Mesik also spoke of the challenges and the unknown that await the futures of her and her classmates.

“The world is a series of random happenstances, all occurring at once,” she said. “We’ve been in a composed school environment for the majority of our lives, most of us with little to no experience of the unpredictability that awaits us.”

While she said it seems scary, she’s confident that her classmates can overcome whatever is thrown their way.

“As I look across my peers, all adorned in the same unflattering black robes, I feel a sense of pride and unity,” she said, her comment causing the audience to laugh. “Inside every single one of you is an incredibly hard worker willing to learn and adapt to succeed.”

Mesik also encouraged her classmates to take care of their own mental and physical health.

She said she’s noticed that many of her classmates will offer glowing compliments to each other, but then put themselves down.

“This hurts my heart so much,” she said.

Mesik said focusing on one’s own wellbeing can lead to success and better attitudes.

She praised her fellow graduates.

“I truly couldn’t be happier with the group of students I’m graduating alongside,” she said. “You’re all so special and intelligent in your own unique ways. It’s incredible to think what I’ve seen this class accomplish.”

Before leaving the stage, Mesik paid tribute to one of her classmates who passed away last year and was unable to graduate Sunday.

“We are all bound to each other. Every one of us, a part of the unforgettable class of 2019,” she said. “Jacy McAlexander truly was outstanding and he will live on with us.”

McAlexander passed away just over a year ago on May 16, 2018, from Ewing’s Sarcoma. He had been diagnosed with the disease when he was just 8 years old, and it returned in 2016.

After all the graduates had walked across the stage, the senior class officers presented a cap and diploma to McAlexander’s parents, who were seated just behind the graduates.

In addition to the graduation ceremonies, academic and athletic awards were given out Sunday, as well as academic honors.

Principal Randy Martin told the audience that 68 percent of the class of 2019 has at least a 3.0 GPA.