Daggett to MNW graduates: ‘Seek to serve others rather than be served’

-Messenger photo by Deanna Meyer
The Manson Northwest Webster concert choir, under the direction of Joel Schoening and accompanied by Pam George, sings “Seasons of Love” during commencement ceremonies Sunday in the high school gymnasium. 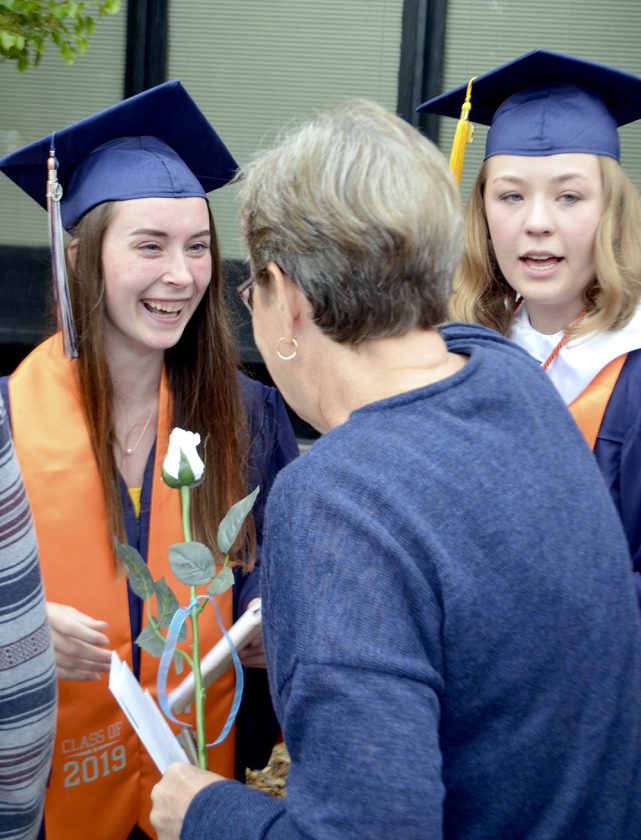 MANSON — For two administrators, the Manson Northwest Webster Class of 2019 will always hold a special place in their hearts.

Superintendent Justin Daggett was just beginning his administrative career as principal at MNW Elementary when the current seniors were sixth-graders.

“I have a special connection with this class,” Daggett said, while giving the welcome during Sunday’s commencement in the high school gymnasium.

In turn, he had a special message for the outgoing seniors: “Seek to serve others rather than be served by others. Put the interests of those around you ahead of your own.”

In doing so, Daggett said they would naturally work hard. 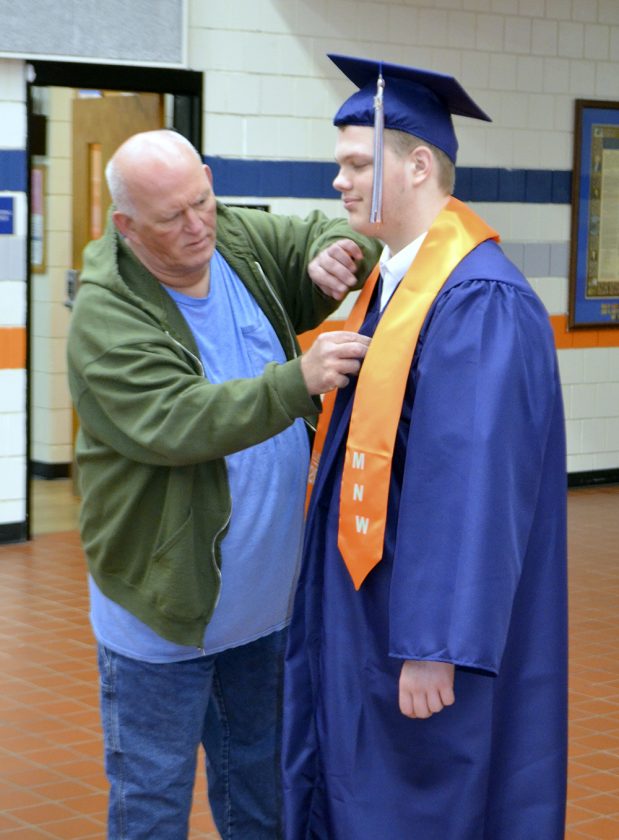 Daggett closed with the following encouragement: “We’re all proud of you. We’re all really excited for you. We can’t wait to see what you’re going to do. Go Cougars.”

Kevin Wood, high school principal, shared a similar story. He was just beginning his tenure as principal at the high school six years ago when the Class of 2019 began their journey as seventh-graders there.

“They were new and I was new,” Wood said. 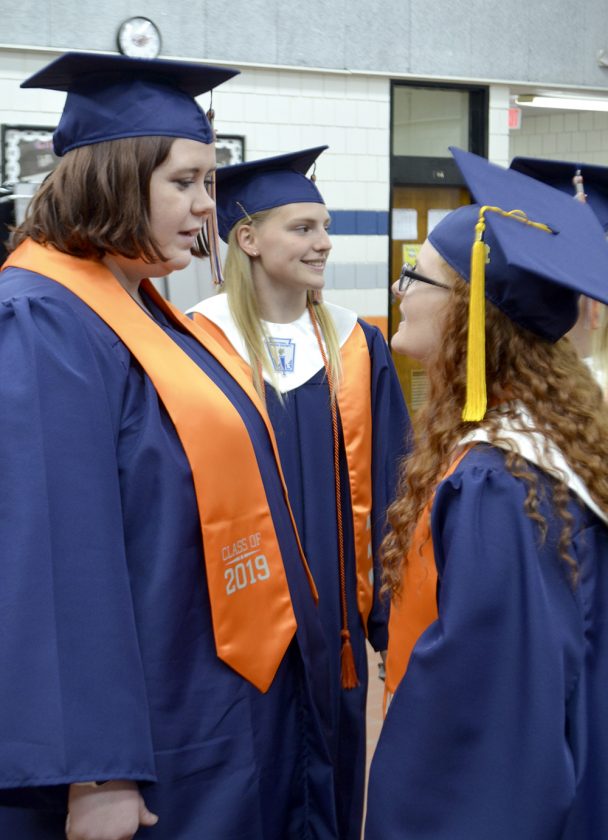 He described the seniors as “very talented,” from athletics to the fine arts, and more.

It is also a class that, for the most part, knows where it’s headed.

Wood said about 40 percent of the 53 MNW graduates will be attending public or private colleges and universities, while 50 percent are headed to community college or two-year tech programs. Another 10 percent will either join the military or directly enter the work force.

“I’ve had these kids for six years, and it’s hard to see them part with their leadership,” Wood said. “Now we’ve got to bring somebody new up and hopefully fill those shoes.” 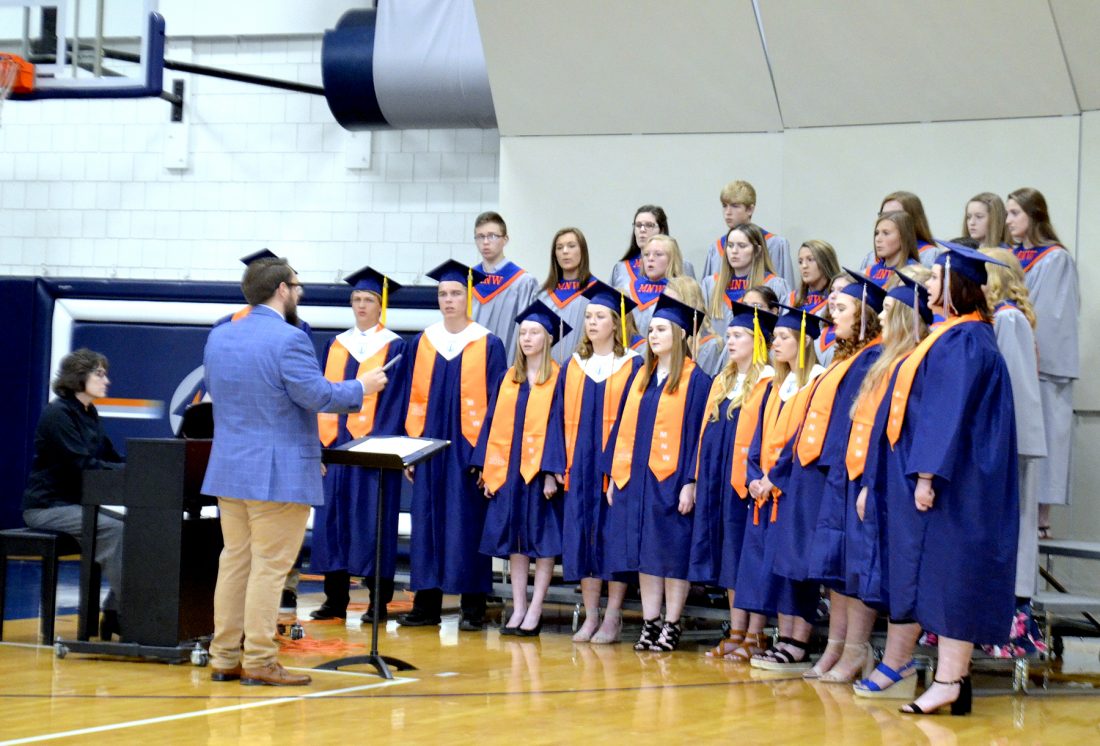 -Messenger photo by Deanna Meyer
The Manson Northwest Webster concert choir, under the direction of Joel Schoening and accompanied by Pam George, sings “Seasons of Love” during commencement ceremonies Sunday in the high school gymnasium.

Wood introduced class speakers Samantha Ruhland and Savannah Michalski, who each received an academic achievement award for maintaining a 4.0 grade-point average all four years of their high school career.

Addressing her peers, Ruhland said their class would not be remembered for their grades or popularity, but for their relationships.

“Don’t forget the friendships you’ve made here,” Ruhland said. “The world will be changed by your contributions.”

Michalski said one of her first memories at MNW was being in the kindergarten chorus and receiving orange T-shirts with “Class of 2019” on the back. She went on to name several other special memories shared by the class.

“I know we’ll all value the memories we’ve made,” she said, while holding back tears. “I know I’ll always have a place to call home.”