-Messenger photo by Peter Kaspari Mickie Shubin, certified treatment specialist with Community and Family Resources, demonstrates how to use an ID scanner. CFR, with the help of a grant, recently purchased four scanners to be used at festivals throughout Webster County to help detect underage drinking.

-Messenger photo by Peter Kaspari A close-up of an ID scanner that will be used by festival workers in Webster County to help detect underage drinking. It scans a driver’s license and displays the age of the license holder. 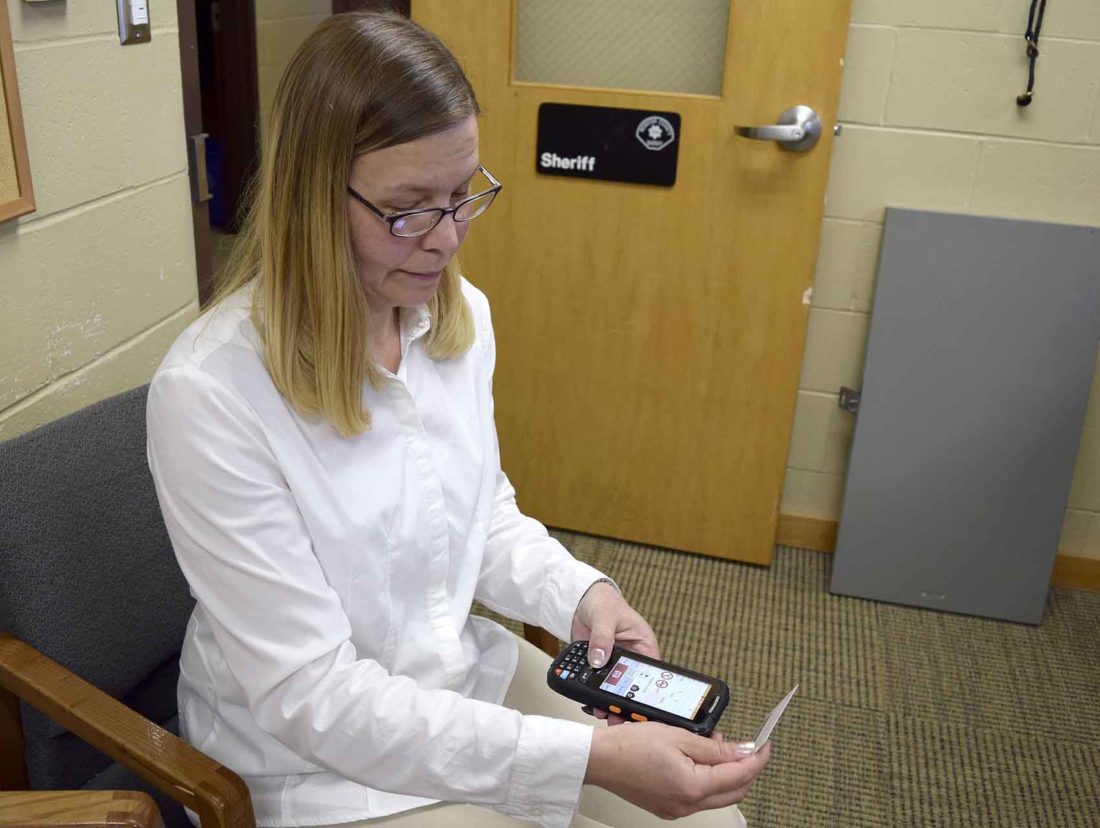 -Messenger photo by Peter Kaspari Mickie Shubin, certified treatment specialist with Community and Family Resources, demonstrates how to use an ID scanner. CFR, with the help of a grant, recently purchased four scanners to be used at festivals throughout Webster County to help detect underage drinking.

In an effort to help stop underage drinking, Community and Family Resources has purchased ID scanners that will help festival workers determine whether or not the person they’re serving alcohol to is under 21 years old.

Four scanners are available to be checked out from the Webster County Sheriff’s Department for any person hosting an event in the county that will be serving alcohol.

Mickie Shubin, certified prevention specialist with CFR, said she has been working with event organizers throughout Webster County to help create alcohol policies as a way of preventing underage people from buying alcohol at their events.

She said the scanners, combined with other measures such as giving wristbands to people who are of legal drinking age, are meant to let festival workers know who can purchase alcohol and who can’t.

“We want to have it available to any community event that serves alcohol,” Shubin said. “That way it makes it a little bit easier for them.” 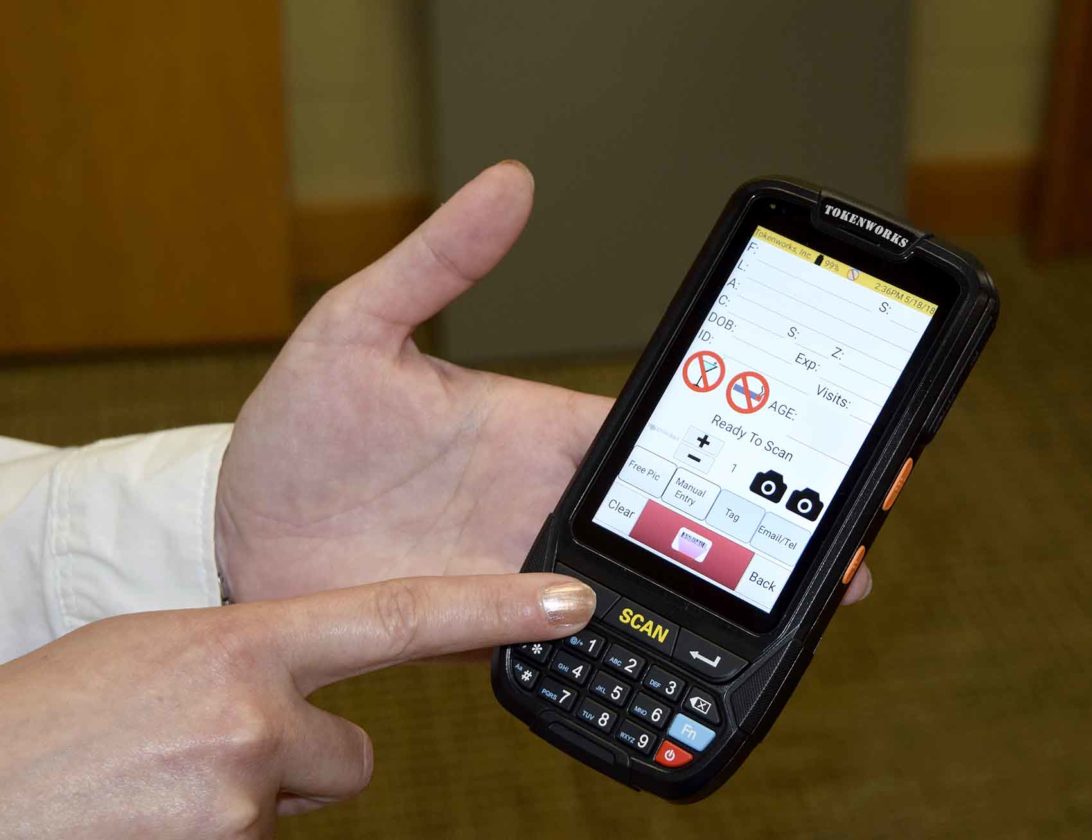 -Messenger photo by Peter Kaspari A close-up of an ID scanner that will be used by festival workers in Webster County to help detect underage drinking. It scans a driver’s license and displays the age of the license holder.

The scanners are very easy to use, according to Shubin. All the person needs to do is provide their driver’s license, which is scanned by event staff. The person’s age will pop up on the screen, along with a photo of an alcoholic beverage and cigarette.

“It’s very simple for them,” Shubin said. “It takes two seconds to can the actual ID and it pops up. It has the little red circle with a line through it if they’re not old enough.”

The scanners are available for any event in Webster County, and any organizer is welcome to use them.

Shubin said there’s a sign-out process with the Sheriff’s Department. The person signing them out needs to provide information such as the event, the person handling the equipment and how long it will be signed out for.

Sheriff Jim Stubbs said the scanners can only be picked up during work hours.

He added that the people getting their IDs scanned will not need to worry about the information being kept.

“People need to know that it doesn’t capture personal information,” he said, adding he understands why people may be cautious, but he stressed that none of the information scanned will be stored anywhere.

“In conjunction with that, if they’re using wristbands, that makes it easier for law enforcement or security to go and ID who’s able to have alcoholic beverages,” she said. “And then just having people aware that events will be using them might stop them from using fake IDs or something like that.”

The Iowa Partnership for Success Grant

The four ID scanners were purchased by CFR with the help of the Iowa Partnership for Success Grant.

Shubin, who is also the local coordinator for the IPFS grant, said Webster County is one of 12 counties that received the grant following a state assessment that determined Webster was one of the top 10 counties for underage and youth binge drinking.

The grant was implemented in June 2016 and will last through September 2019.

“Basically, for any of our strategies, the state would like us to affect or reach at least 50 percent of the target population,” she said.

The strategy most relevant to the scanners is alcohol restrictions at community events.

Shubin said there are 11 events that CFR is working with in Webster County to help craft an alcohol policy that will help keep alcohol out of the hands of people who are younger than 21 years old.

But that’s just one strategy that CFR is using.

Another one that has seen success is the All Stars program, which is geared towards teaching sixth-graders about the dangers of alcohol and drugs and educates them on how to deal with situations they may end up in.

“I’ve worked with the schools and basically what we decided to do is put a section in their parent-student handbooks to try and make it so students that go to the school now that it is OK to go to a staff member and ask for a referral for drugs or alcohol,” Shubin said. “Basically that section is not saying they won’t get in trouble if they have something on them. It’s just saying if you have a problem, please come to somebody who’s at the school and we will help you find referrals to get assistance.”

There’s also an ongoing media campaign the IPFS grant is funding, known as “What Do You Throw Away?”

The campaign includes billboards across Fort Dodge, posters in the schools and even ads appearing before movies at the Fort 8 Theatre.

Ads feature a beer can being crushed, asking “What Do You Throw Away?” and phrases such as “your parents’ trust,” “school activities” and “the team.”

“It’s a powerful thing to get teens, especially, to look at that and think of, ‘If I get in trouble for this, I get kicked off the team,'” she said.

There are also posters that appear at the Crossroads Mall, Rosedale Rapids Aquatic Center and Fort Frenzy.

“Different places that youth would be hanging out, possibly,” Shubin said. “So I think that’s been going really well.”

The final strategy, and the one that Shubin said is still in the beginning stages, is social host liability.

Shubin said the state has a social host law, which states that anybody providing a place for people 17 years old or younger to drink could be charged criminally.

While Shubin said that’s a good law, it doesn’t cover people who are 18, 19 or 20 years old, even though people that age cannot legally drink.

What CFR is working on now is trying to get a city social host ordinance.

“We’re currently getting information to try and talk to the Fort Dodge City Council to see if we can start the process of getting an ordinance written,” she said.

So far, nothing has come up in front of the City Council regarding an ordinance.

With about a year and a half left on the grant, Shubin said everything seems to be going well.

“We’ve had really huge successes,” she said. “Our collaboration council has worked hard to put those things in place so they’re sustainable beyond the grant.”