-Messenger photo by Chad Thompson
Nathan Lange, 9, a third-grader, makes his way down a hallway at Taft Elementary School, recently. The lockers shown to the left were installed over Christmas break.

-Messenger photo by Chad Thompson
Kaleb McCullough, 12, a seventh-grader at Humboldt Middle School, left, shows off his pull car at the school recently. McCullough’s partner for the project, Kyle Caquelin, 13, also a seventh-grader, looks on. 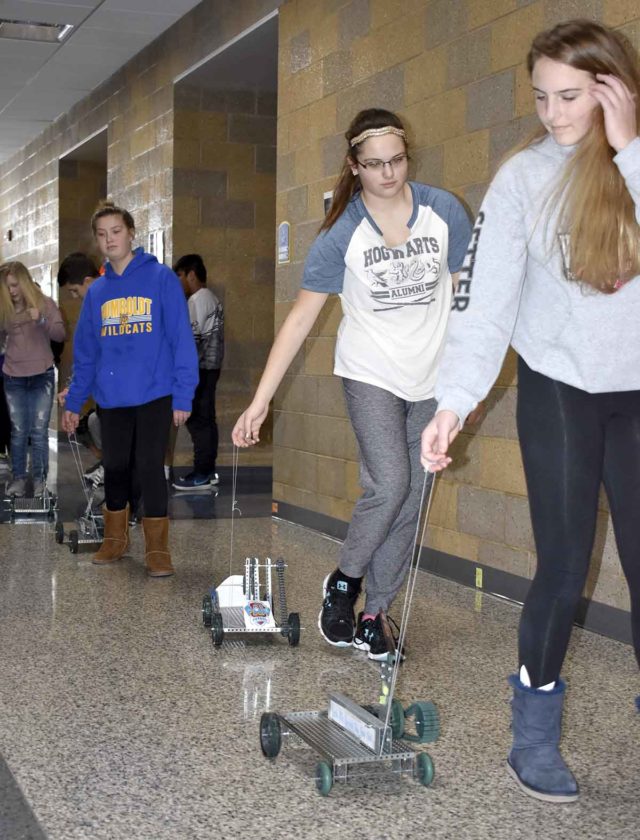 HUMBOLDT — Educators in the Humboldt Community School District are focused on preparing students for technology-based careers.

Students are offered a glimpse of those careers through a program called STEM (science, technology, engineering and math).

“The STEM activities we are doing are not just at the high school,” Superintendent Greg Darling said. “We have a continual flow. It’s an integral part of our education.”

Last year the program was expanded at Taft Elementary School.

According to George Bruder, elementary principal, students are exposed to STEM every day. 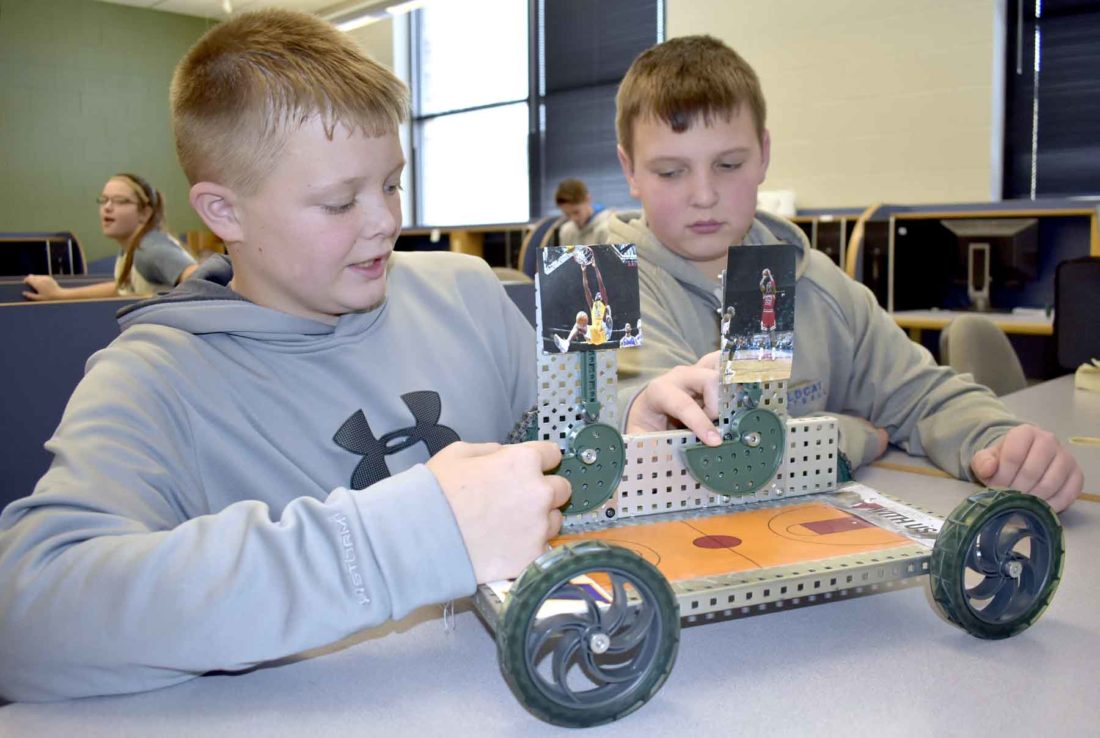 -Messenger photo by Chad Thompson
Kaleb McCullough, 12, a seventh-grader at Humboldt Middle School, left, shows off his pull car at the school recently. McCullough’s partner for the project, Kyle Caquelin, 13, also a seventh-grader, looks on.

Next school year, a newly remodeled room will be dedicated to those activities, Bruder said.

Geitzenauer has been principal since 2012 when the middle school building opened adjacent to the high school.

“We started our STEM program in 2013 to help bridge the gap between middle school and high school,” Geitzenauer said.

The high school is involved in Project Lead The Way, which is a nonprofit organization that provides real-world challenges through pathways in computer science, engineering, and biomedical science. 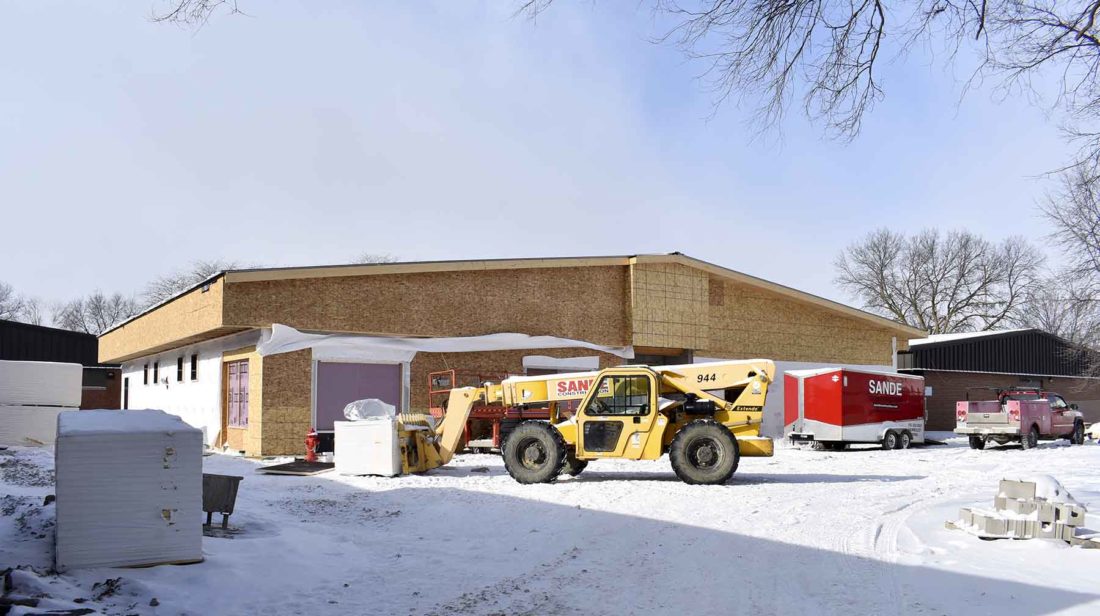 Geitzenauer, a former science teacher, said she sees the value in STEM programs.

“We see that need for kids to learn about STEM and the careers that go with it,” she said.

“We work a lot with automation and how to make things more efficient,” Poole said. “Ways to eliminate jobs that are harder on the human body.” 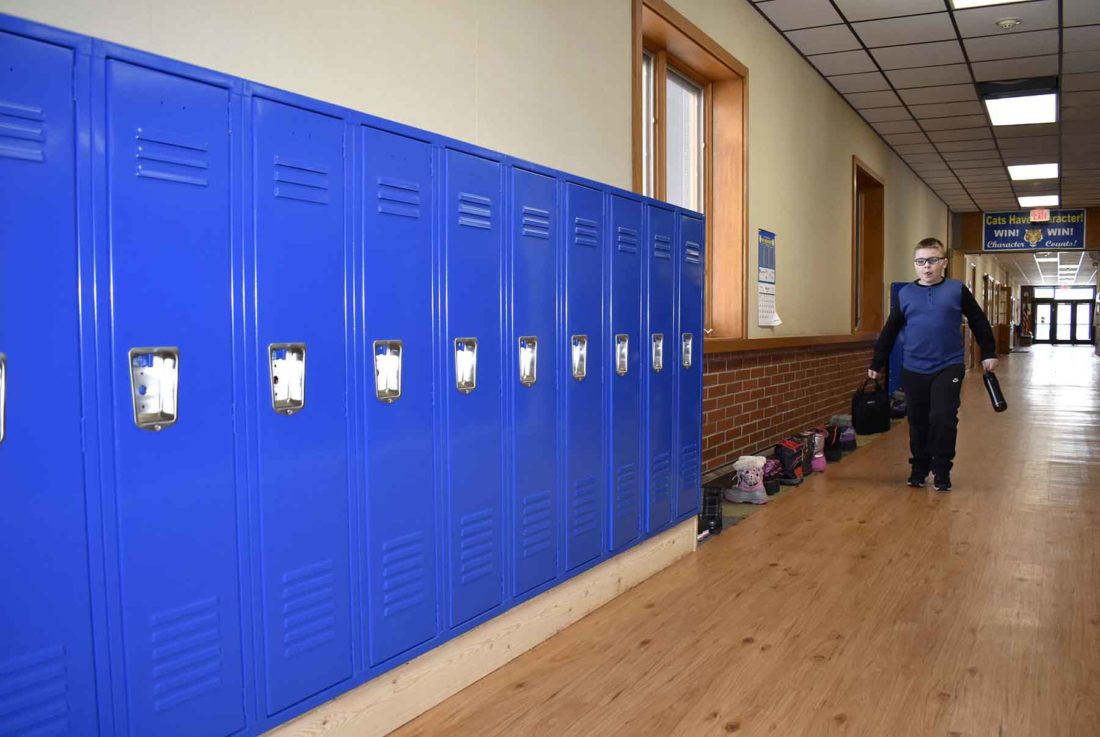 -Messenger photo by Chad Thompson
Nathan Lange, 9, a third-grader, makes his way down a hallway at Taft Elementary School, recently. The lockers shown to the left were installed over Christmas break.

“We are eventually going to add motors to that mechanism,” Poole said.

According to Darling, these are skills that will translate to success when students graduate.

“We feel it’s important for our students because of the type of jobs they will be taking in 10 to 15 years,” he said. “You will need to have that type of background to be a citizen and help them get a good job in this community or the state.”

Darling added, “We want our kids to achieve high levels, but we also want to fill the void out there that there is with technological jobs. Almost any job you have to deal with some type of technology.”

In terms of performance, Humboldt schools continue to show success.

Statewide assessments are also a factor.

Each school receives one of the following ratings: exceptional, high-performing, commendable, acceptable, needs improvement, and priority.

“We did really well with our state report card,” Darling said. “Our proficient scores are some of the highest in the state.”

The district is also experiencing an increase in diversity.

“Our minority population has increased about 10 percent in the last 10 years,” Darling said.

At the middle school, Geitzenauer said assisting ELL students is a priority.

“A big thing is helping our ELL students to make more gains,” Geitzenauer said. “We have had professional development and have made that a focus. Their needs are different than what we have had in the past.”

The middle school’s Hispanic population has increased almost 4 percent since 2015.

“Our ELL program has grown in the past couple of years,” Geitzenaur said. “Our teachers are working hard and making accommodations for that.”

“Our reading scores the past five years have steadily gained,” she said. “When I came in that was something we wanted to address.”

A new program called CATS time is geared towards helping students in all areas, Geitzenauer said.

During CATS, students work on projects that need the most attention.

Geitzenauer said the program includes everyone.

“From TAG students to ELL students,” she said. “It’s not just if I’m struggling, I go to CATS. Everyone gets what they need during that time.”

Geitzenauer said what impresses her the most is the level of collaboration among teachers.

“I like how all of our teachers work together well and look at students and what they need and not just go with the status quo,” she said.

Construction continues on a 7,000-square-foot addition at Taft Elementary School.

The expansion, which will include an all new media center, art room, music room, and STEM room, is being added to the middle of the school’s U-shaped building.

The anticipated completion is set for July 1 and will be in use by the fall, according to Superintendent Greg Darling.

Parts of Taft’s existing space has also been renovated, according to George Bruder, elementary principal.

“The office is redone,” he said. “It’s nicely done. New lockers went in over Christmas break in the north wing and those are very nice.”

The front entrance to the school has also been remodeled, allowing visitors to enter the lobby without having to buzz in.

“The new additions are coming along nicely,” Bruder said. “The secretary is very pleased with the office.” 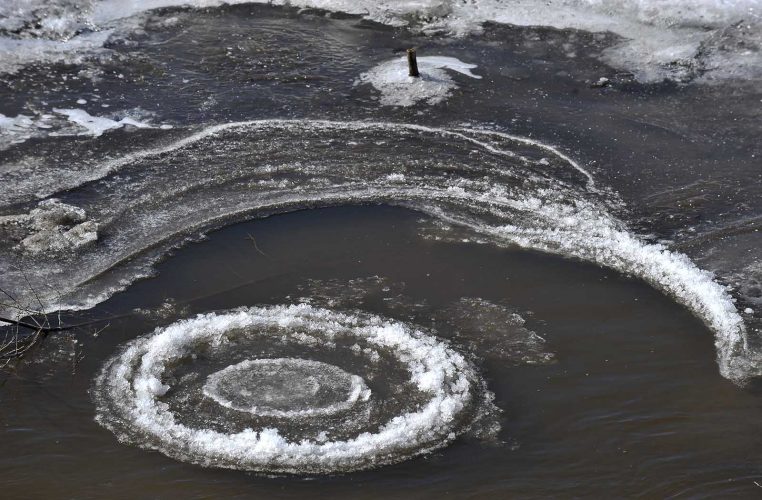 SCRANTON — Scranton Manufacturing employees began returning to work Wednesday morning after a fire damaged one of ... 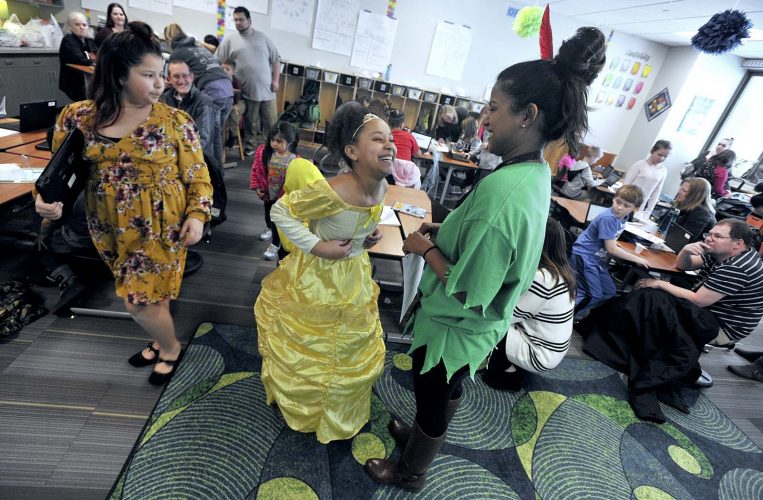 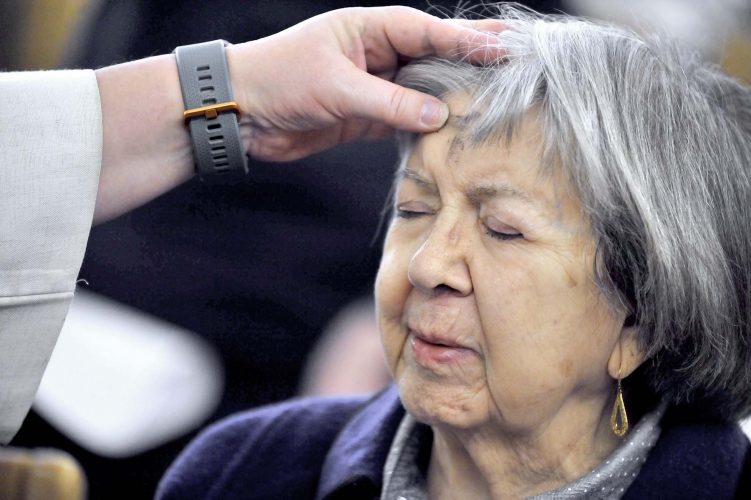 The immediate risk for the COVID-19 virus, otherwise known as the novel coronavirus, remains low in Webster County, ...