Shivers gets 25 years for vehicular homicide 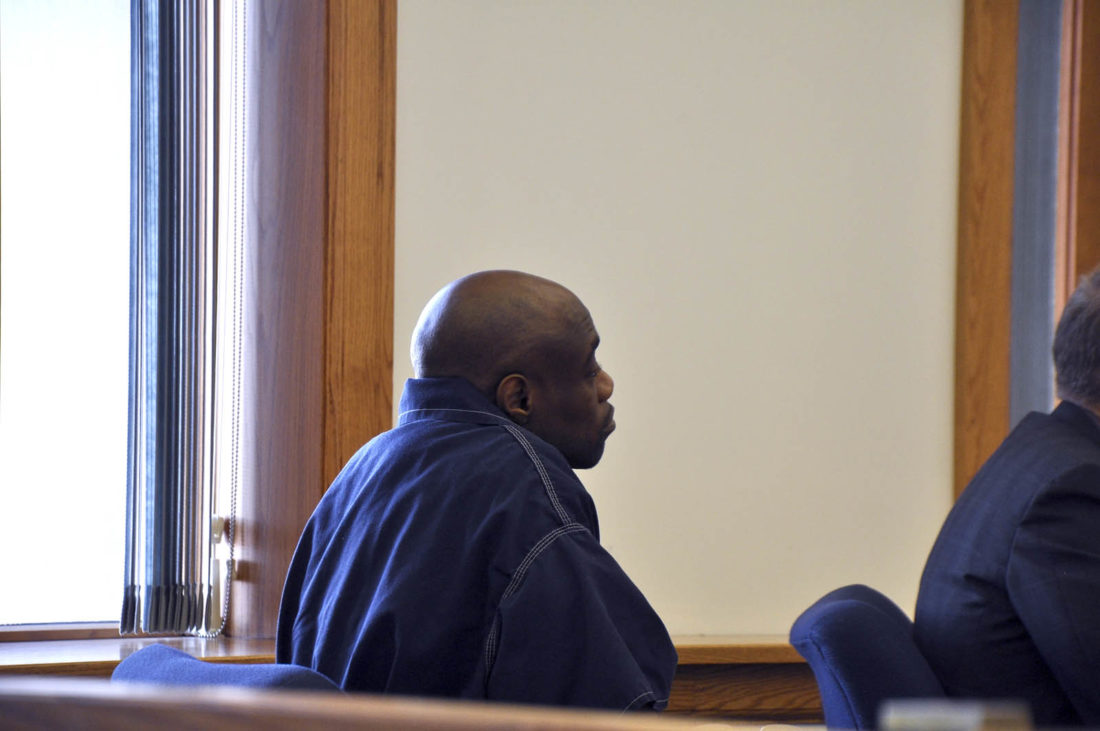 -Messenger photo by Peter Kaspari Leon Shivers listens while a victim impact statement is read during his sentencing Monday. Shivers was convicted of vehicular homicide while operating a motor vehicle intoxicated earlier this month.

The man who drove drunk and crashed his SUV into a minivan, leading to the driver’s death, asked the victim’s family for forgiveness.

Leon Shivers, 46, of Fort Dodge, was sentenced to a maximum 25 year prison sentence Monday after he was convicted on Nov. 2 of vehicular homicide while operating a motor vehicle while intoxicated.

“Me, myself,” Shivers said in Webster County District Court. “I do accept responsibility.”

He was speeding when he drove his 2011 Dodge Journey through an interesection in Fort Dodge, crashing into a 2014 Chrysler Town and Country minivan driven by John McCartney, 82, of Fort Dodge.

McCartney later died from complications related to his injuries. 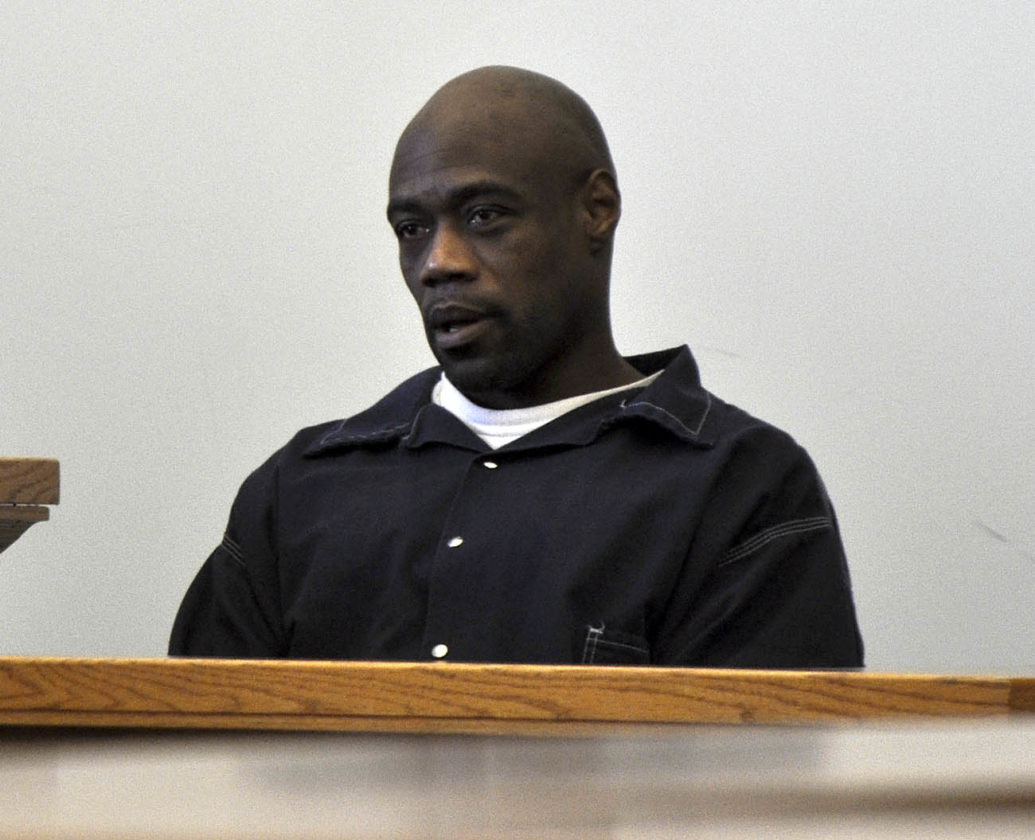 -Messenger photo by Peter Kaspari Leon Shivers speaks to the family of John McCartney during his sentencing Monday in Webster County District Court. Shivers, while intoxicated, drove into McCartney's vehicle at an intersection in Fort Dodge, eventually leading to McCartney's death. Shivers received 25 years in prison in the case.

“I cannot change what happened,” Shivers said. “Nothing.”

But he did tell the McCartney family he hopes he will be forgiven for his actions.

“All I can do is ask for forgiveness,” he said. “One way or another, I’m going to have to deal with this.”

He said that he has also struggled with his actions since the crash on April 4, 2016. McCartney died on April 22.

“I’ll just keep pushing forward,” Shivers said. “Stay away from negativity. I’ve been dealing with this since day one.” 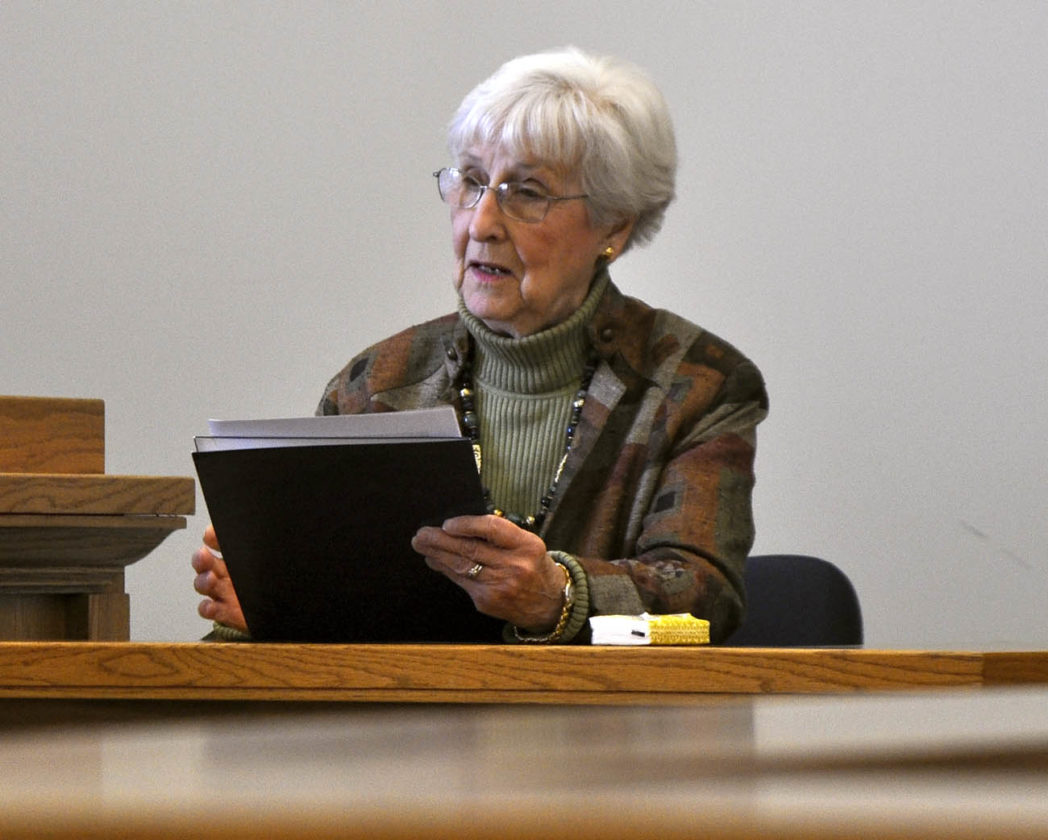 -Messenger photo by Peter Kaspari Beverly McCartney, of Fort Dodge, reads her victim impact statement in Webster County District Court Monday. Her husband, John McCartney, died in April after his vehicle was hit by one driven by Leon Shivers. Shivers was convicted of vehicular homicide while operating a motor vehicle intoxicated earlier this month.

Prior to Shivers’ sentencing, four vicim impact statements were read to the court.

“Mr. Shivers, your irresponsible actions took away the love of my life,” Beverly McCartney said. “We had been marreid 55 years. You took away the father of my three children, the grandfather for three grandsons and two step-granddaughters and the great-grandfather of two lovely great-grandsons.”

Her husband was her constant companion. She said they took trips to the South together, went on walks together and he also accompanied her to church and different events.

“John won’t be there at Christmas to sing Christmas carols or help cut the turkey at Thanksgiving or eat his favorite homemade banana cream pie,” McCartney said. “I still miss John playing saxophone in the Karl King Band.”

“I will pray that you learn to take responsibility for your actions,” McCartney said. “I have not forgiven you, and I may never be able to do it. I will try.”

After McCartney finished her statement and was heading back to her seat, a woman, who was identified in court as Kari Crooks, Shivers’ girlfriend, confronted McCartney.

“He wasn’t driving and you pulled the plug,” Crooks said to McCartney. “You killed your own husband.”

Audible gasps could be heard in the courtroom as Crooks made her statement.

He then ordered Crooks removed from the courtroom for the duration of the hearing.

Wilke then allowed Kevin McCartney, one of John McCartney’s sons, to speak.

He recalled the last time he ever saw his father conscious and alert, which was in the emergency room at UnityPoint Health — Trinity Regional Medical Center.

“I got to talk to Dad,” Kevin McCartney said. “He was conscious when I was there. My optimism, I’m very optimistic, said everything is going to be OK. I got to see him sign his name.”

He said his father lost consciousness for the last time on the helicopter ride to Mercy Medical Center in Des Moines.

“The following weeks are pretty much a blur,” McCartney said. “Morning meetings with the brain surgeon, trauma team. Sitting beside Dad, holding his hand, talking to him, reading to him.”

He said the court’s sentence is only part of Shivers’ punishment.

“No matter how the court sentences you, it will not be enough,” McCartney told Shivers. “When you stand in front of your maker, God will judge you.”

The loss of his father means no more opportunities for making memories, Jim McCartney wrote in his letter.

“My son is a third-generation band director,” Bair read from the statement. “My dad was so proud of him, his grandson, and was looking forward to seeing him lead his own band.”

Spencer wrote that, instead of family members getting to see John McCartney, they will now only hear stories of him.

“Now we will have to tell his great-grandchildren about Grandpa because of your choice to get drunk and then drive,” Harvey read from the letter.

Ronnie Shivers, Leon Shivers’ brother, spoke in support of his family and asked the McCartneys for forgiveness.

In speaking to the family, Shivers referred to his brother by his middle name, Kurt.

“I wanted to say sorry,” Ronnie Shivers said. “I’m sorry for you losing your husband, son and father as well, and I’m sorry for losing my brother. Kurt being drunk, he didn’t know how to acknowledge the fact he’s a drinker. I hope Fort Dodge knew Kurt was a drinker.”

While Shivers was not justifying his brothers’ actions, he said there was someone else that night who gave the keys to his brother to drive, despite knowing he was drunk.

He only identified this person as female and did not name this person.

“The girl that gave her keys to the car knew Kurt was drunk,” Shivers said. “That’s a crime. Therefore, we lost two lives because of one person’s neglect.”

He also said Leon Shivers was not what caused John McCartney’s death, but rather the SUV he was driving was.

“Leon did not commit the crime, the car committed the crime,” Ronnie Shivers said. “I need everyone to acknowledge the car. Instead of looking at Kurt like he literally killed someone, you look at the car.”

In addition to his prison sentence, Shivers will have to pay at least $150,000 in restitution. More restitution will be coming once the county attorney’s office receives a final total from the McCartney family.