-Messenger photo by Darcy Dougherty Maulsby
The silo is one of the many original components to the barn.

-Messenger photo by Darcy Dougherty Maulsby
This is the last round barn standing in Wright County and was built around 1911.

-Messenger photo by Darcy Dougherty Maulsby
Roger Dahlstrom sits inside his round barn. 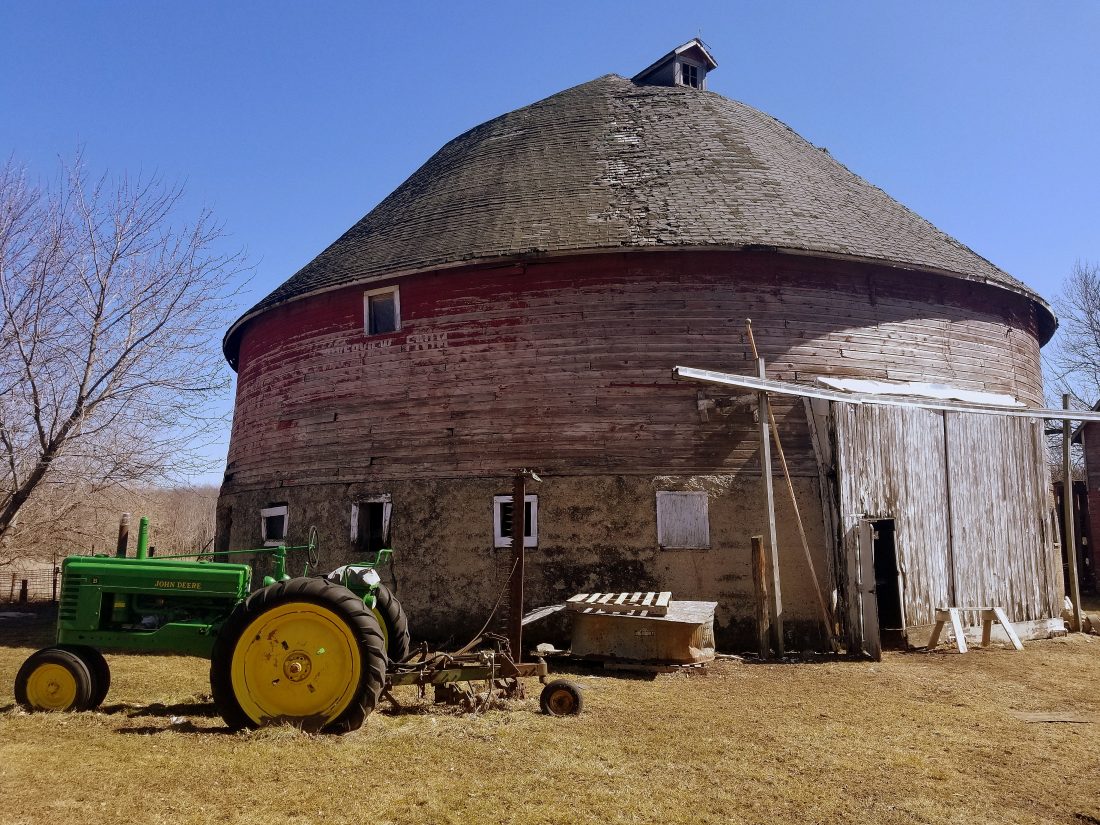 -Messenger photo by Darcy Dougherty Maulsby
This is the last round barn standing in Wright County and was built around 1911.

GOLDFIELD — It’s the last round barn standing in Wright County. In fact, it’s one of the last round barns in Iowa. It’s located southwest of Goldfield in Eagle Grove Township, and it’s close to the Boone River that inspired the name Riverview Farm, which can still be read in the fading white paint accenting the peeling red paint that clings to the barn’s exterior.

While the rest of the world hurries by on Highway 17 just a few miles to the north, this round barn remains in a realm that time forgot. Stepping inside is like entering a mini museum of Midwestern agricultural history.

“The barn was built for a progressive Danish immigrant family,” said Roger Dahlstrom, who owns the barn.

Constructed around 1911, the barn’s design was influenced by Professor Franklin Hiram King, an agricultural physics professor at the University of Wisconsin-Madison. In the early 1900s, he promoted the round barn design as being economical, stable and efficient for use as a dairy barn. It was claimed that round barns withstood wind and weather better. King also noted that if the silo were built in the center, it would prevent silage from freezing and spoiling.

“The barn was designed by architects, factory-kit made and still stands on its original site,” said Dahlstrom, who lives in the Des Moines area. 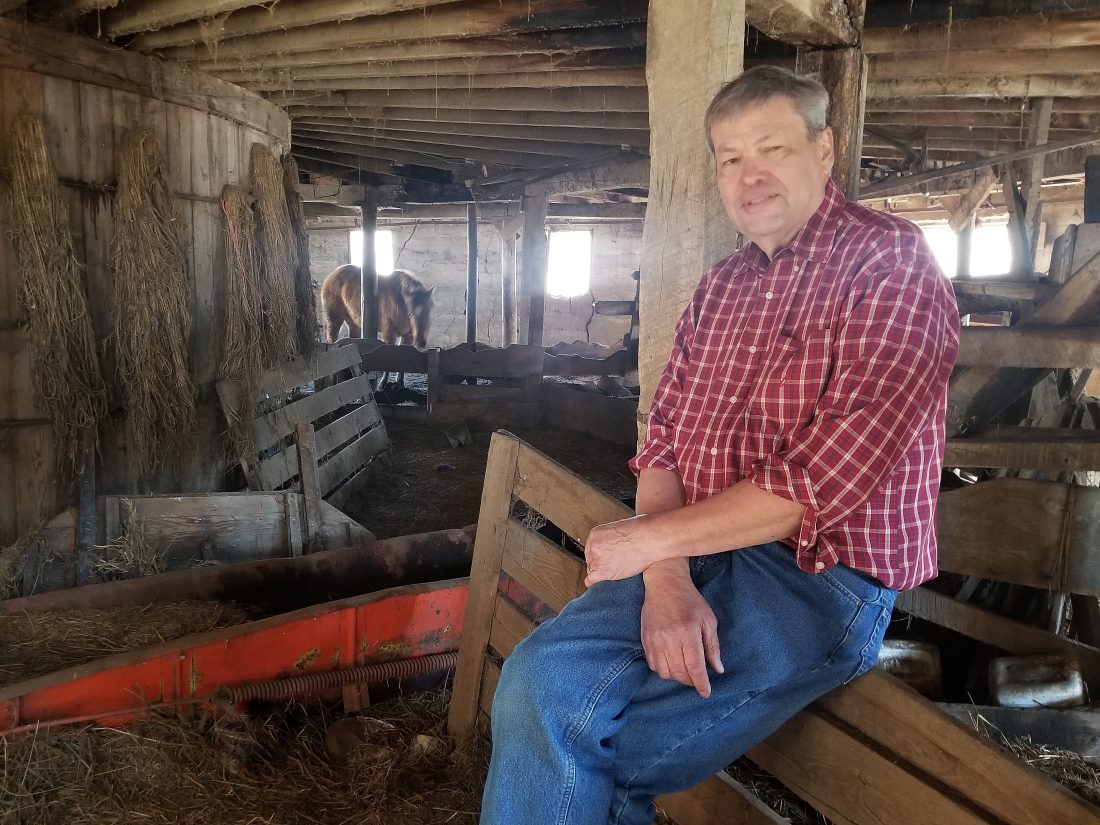 -Messenger photo by Darcy Dougherty Maulsby
Roger Dahlstrom sits inside his round barn.

All the components of the 60-foot-diameter barn are original, except some stanchions and first-floor posts that have been removed. The manure carrier system and hay carrier equipment designed for the round barn are still intact. The original Case silage system, designed to fill the interior wooden silo made of spruce, is still intact. The barn’s original electrical system is also mostly intact, Dahlstrom said.

All these pieces of the past resonate with Dahlstrom, who noted that growing up on a farm helps teach good discipline, mechanical skills and a mindset of repurposing and adapting.

“I appreciate previous generations’ hard work and efforts to make work more productive,” he said. “Iowa has a heritage of inventiveness and service to the world.” 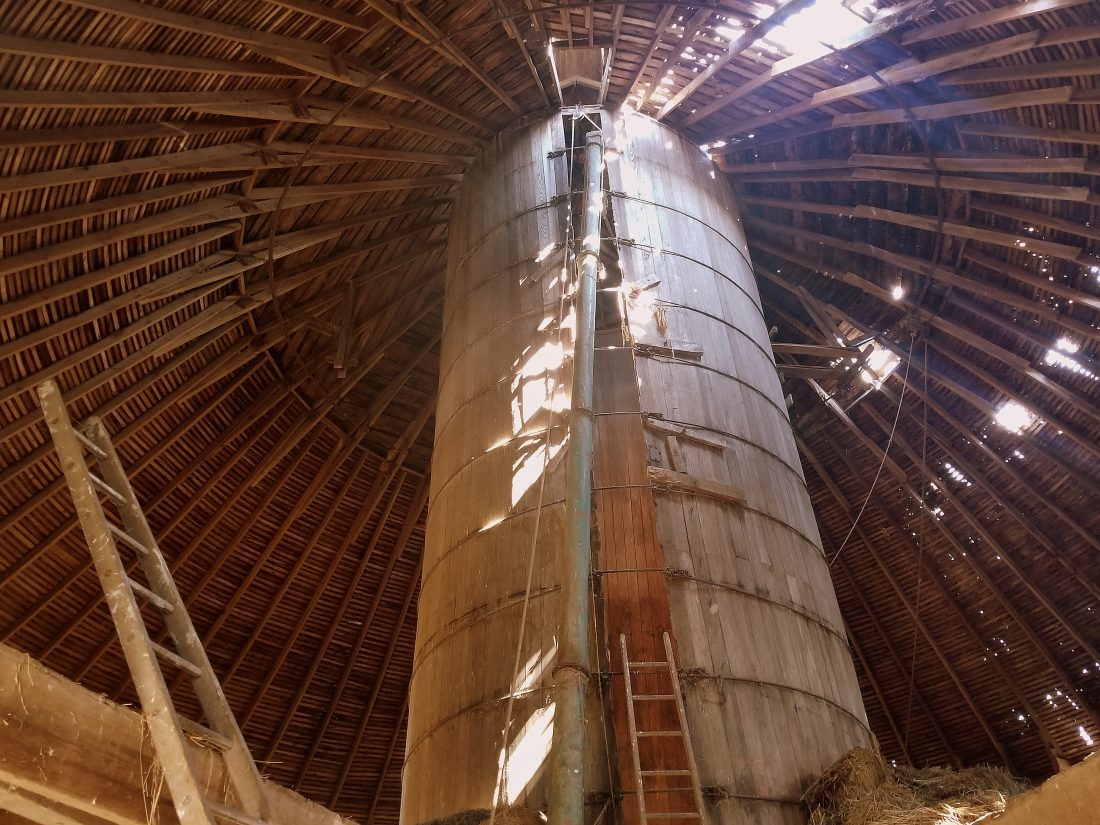 -Messenger photo by Darcy Dougherty Maulsby
The silo is one of the many original components to the barn.