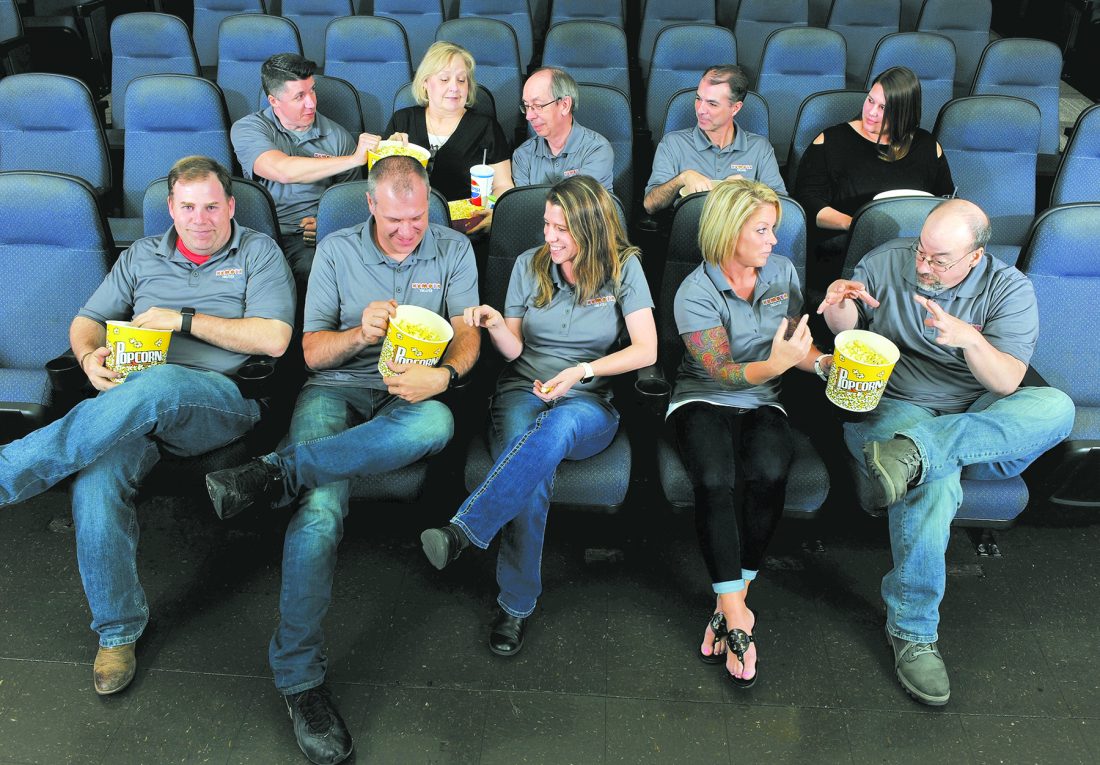 HUMBOLDT — A long line of moviegoers stretched around the block of Humboldt’s main street, Sumner Avenue, waiting to see a show at the historic Humota Theater.

The crowd of more than 150 people were there on April 25 to see “Avengers: Endgame.”

For community members in Humboldt, that was a special moment.

It was a line Chad Theesfeld, president of the Humota Movie Group, thought he might never see again when almost one year ago the theater was in jeopardy of shutting down for good.

But thanks to community partners, generous donations, and countless hours committed by volunteers of the Humota Movie Group, the theater was able to show the hottest movie in the world at that time on the big screen. 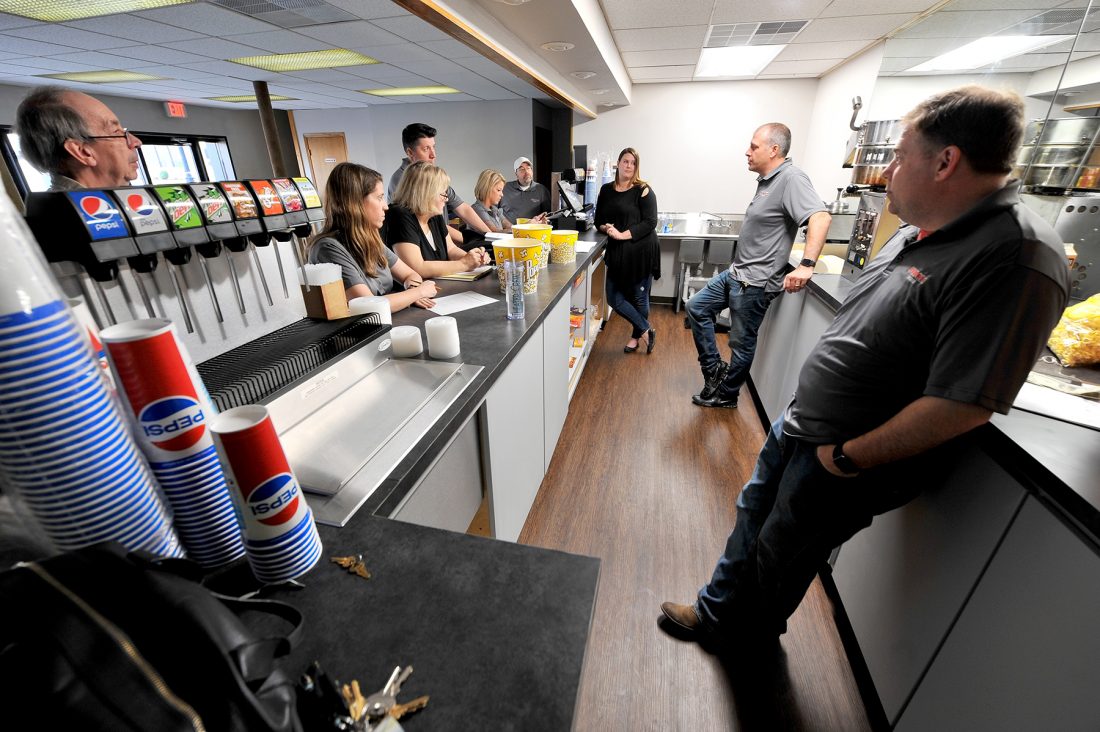 -Messenger photo by Hans Madsen Members of the Humota Theatre Board hold one of their monthly meetings around the snack counter.

“One of most rewarding things was opening the doors on that Thursday to the biggest movie in the country,” Theesfeld, of Dakota City, said. “That was a huge highlight for us.”

Sarah VanOrd, Humota Theater manager, said it was a day she won’t forget.

“Helping hundreds of community members through the door, seeing the smiling faces of children clutching their kids trays, and listening to the parade of compliments about how good our popcorn still tastes was the highlight of that whole day,” she said.

But getting to that point was not a seamless transition, according to Theesfeld.

In July of 2018, R.L. Fridley Theatres announced its plans to sell the theater or close it. 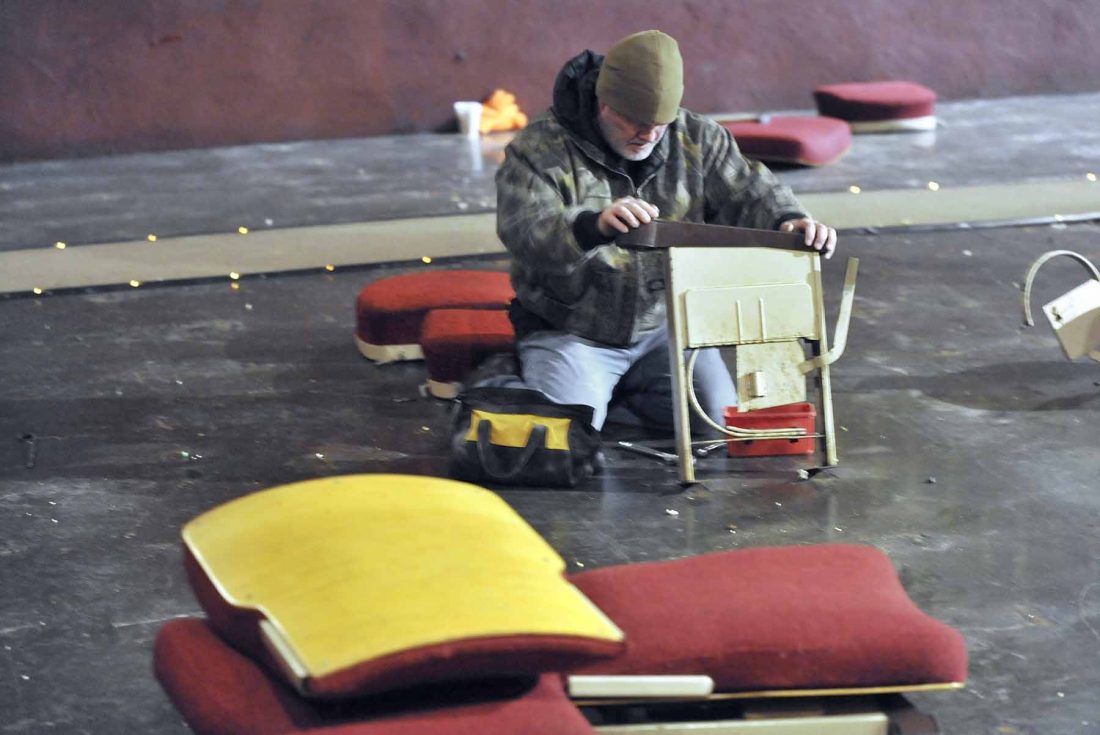 -Messenger photo by Hans Madsen
Kip Ireland, of Humboldt, works on getting a seat support loose from the floor Saturday morning inside the Humota Theatre in downtown Humboldt.

The best chance for the continuance of Humota was for a nonprofit group to form and take ownership of the theater. Meetings were held in the coming weeks on how to make that happen.

And at that time, Theesfeld, who also works full time at Murphy Tractor in Fort Dodge, was just a spectator.

He was tracking the progress of the theater on social media through updates provided VanOrd, who at that time was an employee for Humota.

After about a month of occasionally checking in and seeing which names were on the ballot for a movie board, Theesfeld decided to take action.

“Finally, I put my name in there because it seemed like they weren’t getting enough names,” Theesfeld said. “I thought, ‘I do have an interest in pursuing being on the board.’ I really liked the theater and would have hated to see it go.” 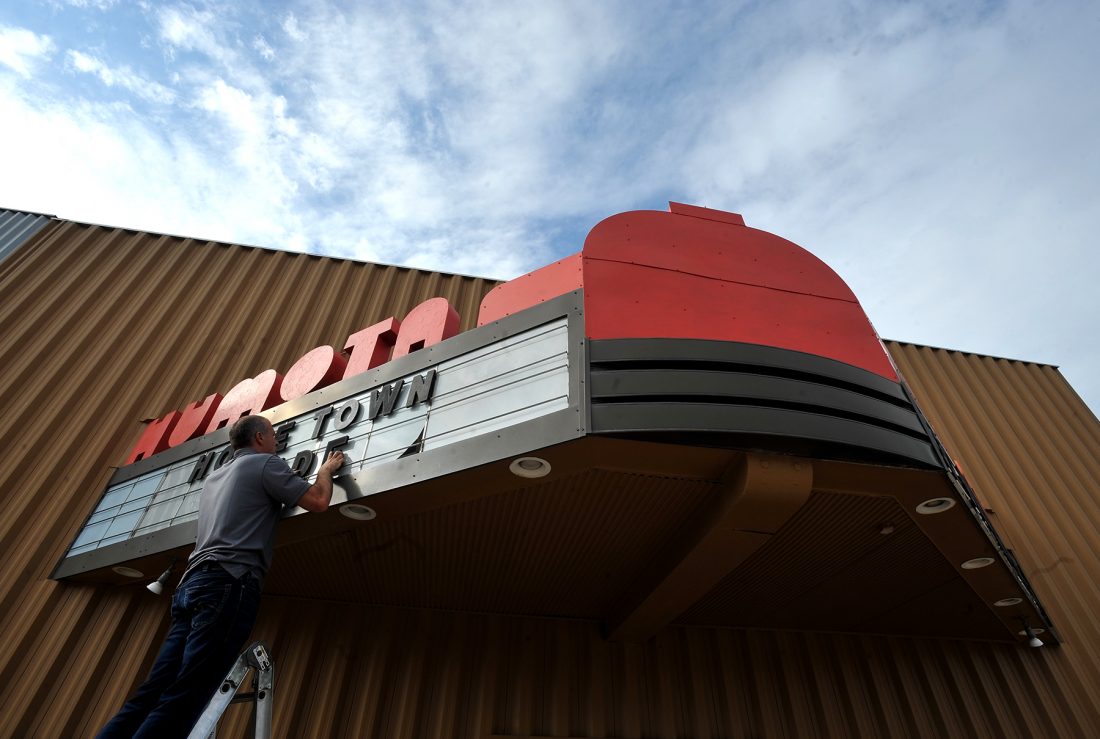 -Messenger photo by Hans Madsen Humota Theatre Board President Chad Theesfeld changes out the letters on the marque under a bright blue sky.

As a kid, Theesfeld recalled going to Humota to see movies such as “E.T. the Extra-Terrestrial,” which was released in 1982.

But he never would have guessed he would have been involved in the theater business.

“I’ve never really strived to be on any board,” he said. “But since I am on it now and I’ve been on it since October of last year, I am very attached to the organization.”

He added, “My kids are 13 and 16 and you can’t let things like the theater leave the town and expect your kids to find something else in the area to do. You need it to be right in your own community and luckily we have had a lot of good community support.”

Theesfeld was ultimately elected president of the Humota Movie Group. 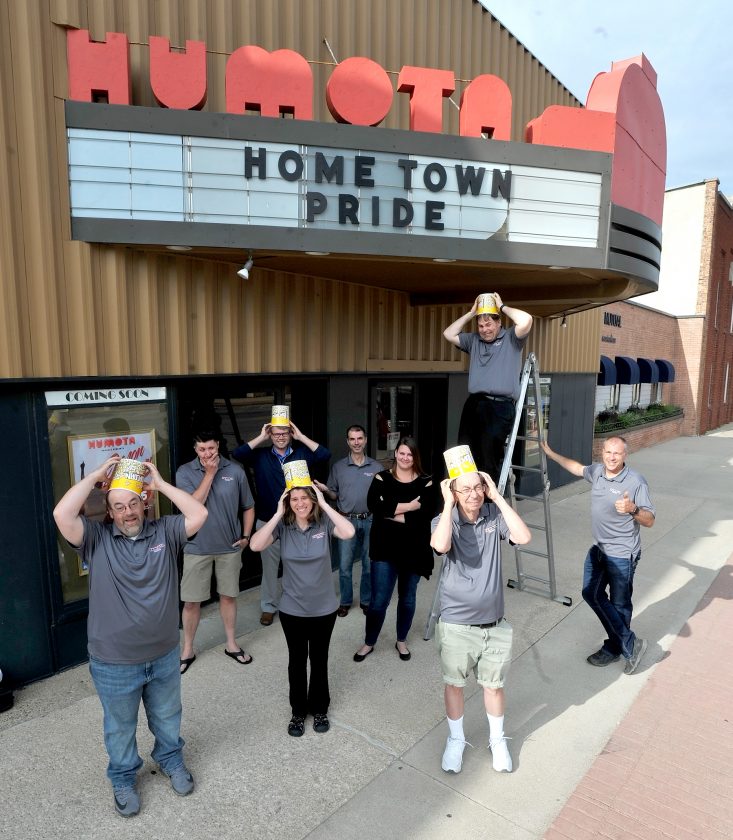 -Messenger photo by Hans Madsen Members of the Humota Theatre Board and manager have a little fun with some popcorn buckets during the photo shoot for the Hometown Pride cover photo in front of the marque especially decorated to celebrate The Messenger’s Hometown Pride section. They are, from left, Jeff Knutson, board member, Jacob Zweibohmer, board member, Bob Myott, board members, Stacey Origer, secretary, Bill Jorgensen, treasurer, Sarah Van Ord, general theatre manager, Tom Tierney, board member, Andy Milan, on ladder, advisor and Chad Theesfeld, president.

Seeing the theater continue operations was especially important to Knutson, of Humboldt.

He has been watching movies at Humota since the 1970s.

“My first time was when I was 7 years old going to ‘Scooby Doo,'” Knutson said.

He added he’s seen more than 1,000 movies at the theater.

“Depending on what was going on that week, I would go at least once a week on Friday and Saturday night,” he said.

After the board took responsibility for the operations of the theater, Theesfeld said the hope was to get things up and running a few weeks later. But that didn’t happen.

“We got to February and, honestly, there was a lot of things up in the air,” he said.

One of those things was the software used to run the projector.

The movie group also had to acquire contracts with film studios to be able to play certain movies.

“We have had to fill out studio contracts and the overwhelming amount of legal paperwork was something none of us were prepared for,” VanOrd said.

While waiting on those contracts, the group decided to remodel the inside of the theater.

Gronbach Construction, of Humboldt, relocated and expanded the restrooms. The restrooms are located in the same area and are ADA accessible.

“We envisioned the restroom project one we would tackle a year or so down the road, but since we had to close it was an optimal time to get it done,” Theesfeld said. “To do that they had to cut into the concession space.”

The result was new countertops, cupboards and flooring.

Next the movie group turned its attention to the seats in the auditorium.

An anonymous donation led to the replacement of 312 rickety red chairs that had been in place since the 1980s.

They were replaced with 261 blue seats and four handicap-accessible seats.

When the seats first arrived at the theater, the movie group wasn’t quite sure how they were going to get them installed, Theesfeld said.

“One weekend my wife and my kids and I decided to try and put in a row of these seats,” Theesfeld said. “We got the final back row in, that’s the one row my wife and kids did with me.”

Eventually, Tanya Heier, of Sande Construction, sent some construction workers to the theater to provide some manpower.

“They ended up being there for three days and had a pretty large crew in there,” Theesfeld said. “That’s not their job, but we really appreciate it.”

“When you look at everything, there really isn’t much that hasn’t been addressed or fixed,” Theesfeld said.

By mid-April, the group was almost ready to reopen the theater.

“We finally had gotten the go-ahead from enough people that we decided to push for the opening of ‘Avengers: Endgame,'” VanOrd said. “Not only that, but we opened with the advanced screening, allowing us to show it the day before it was nationally released. What many people may not realize is that theaters were sold out for the entire first week across the state of Iowa, so with us opening that day we had people coming to our theater from all over the place, not just here in our community.”

The line around the block was something that hadn’t been seen for some time.

“The movie staff couldn’t remember that happening in recent history,” Theesfeld said. “And the last time I remember it happening was when ‘E.T.’ came out.”

Knutson was relieved to see the interest in the theater.

He said the revival of the theater was made possible through hard work.

“I couldn’t be prouder of the group and the work they have put in,” Knutson said. “We are hard working, energetic, like-minded people. We have different personalities and backgrounds, but we have one common goal — to save the Humota.” 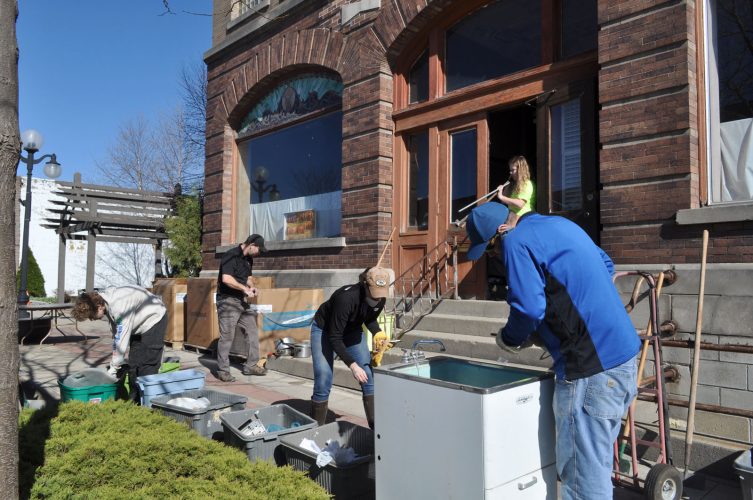 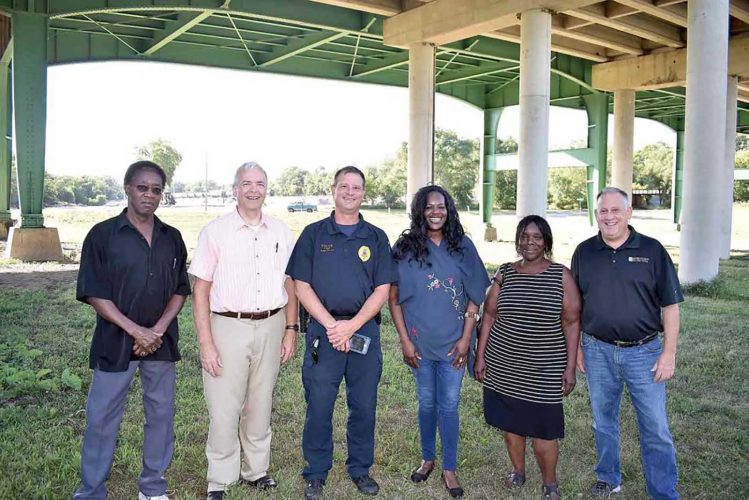 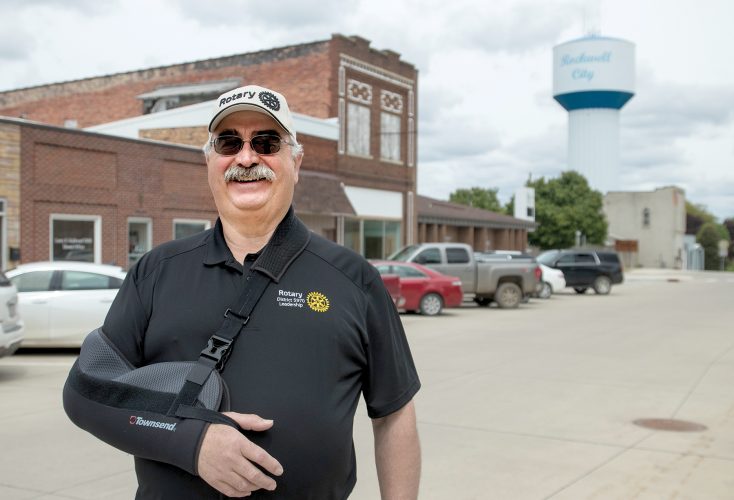 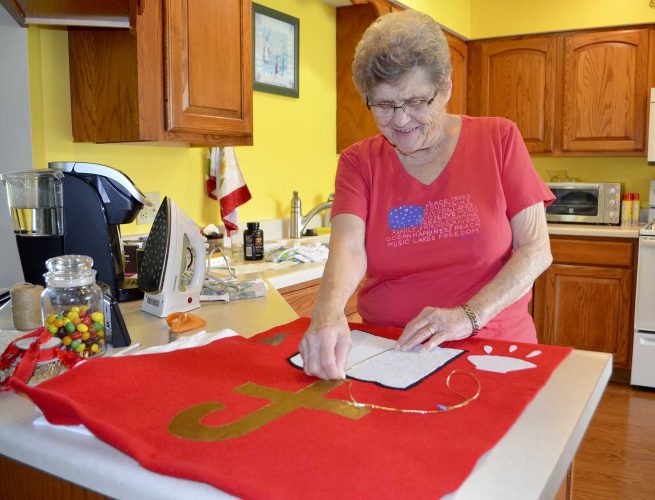 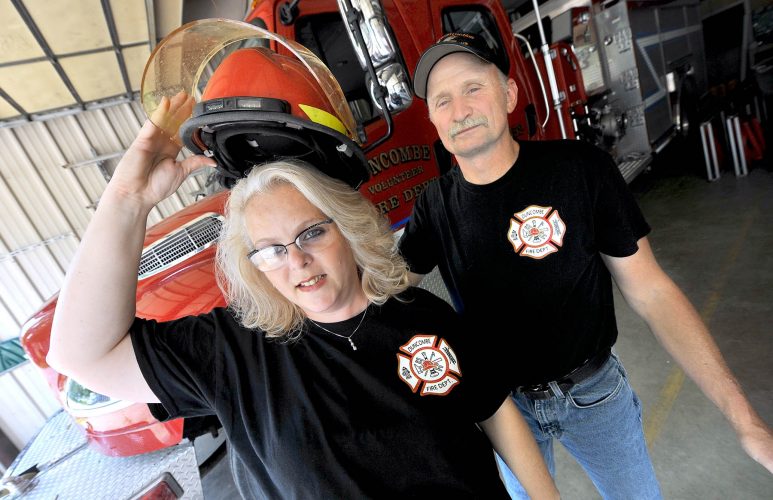 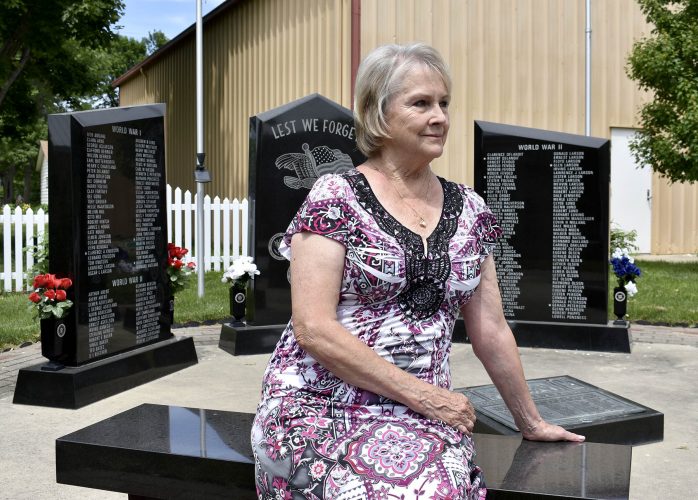