-Messenger photo by Hans Madsen
Joyce Phipps, at left, offers her husband Cecil Phipps, a dinner roll fresh out of the oven at their campsite in John F. Kennedy Memorial Park.

-Messenger photo by Hans Madsen
Webster County Conservation director Matt Cosgrove looks over one of the new yurts under construction in the campground at John F. Kennedy Memorial Park. The huts will be ready for use during the 2020 camping season. 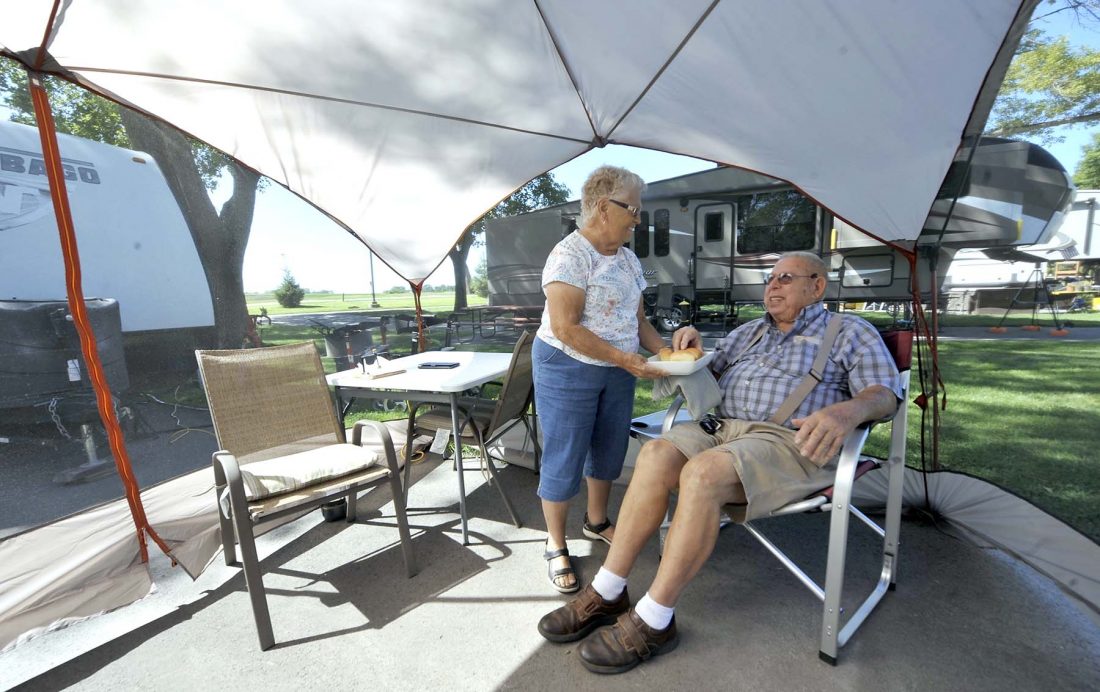 -Messenger photo by Hans Madsen
Joyce Phipps, at left, offers her husband Cecil Phipps, a dinner roll fresh out of the oven at their campsite in John F. Kennedy Memorial Park.

Webster County Conservation Director Matt Cosgrove took a trip through the campground at John F. Kennedy Memorial Park recently to check and see how everyone was doing.

A bit more than half the spots had campers or tents in place.

He offered a prediction.

“This will be full by tonight,” he said.

He’s confident in that prediction because so far this camping season — in spite of a lot of rain that usually puts a damper on it — it’s been full or nearly full every weekend. 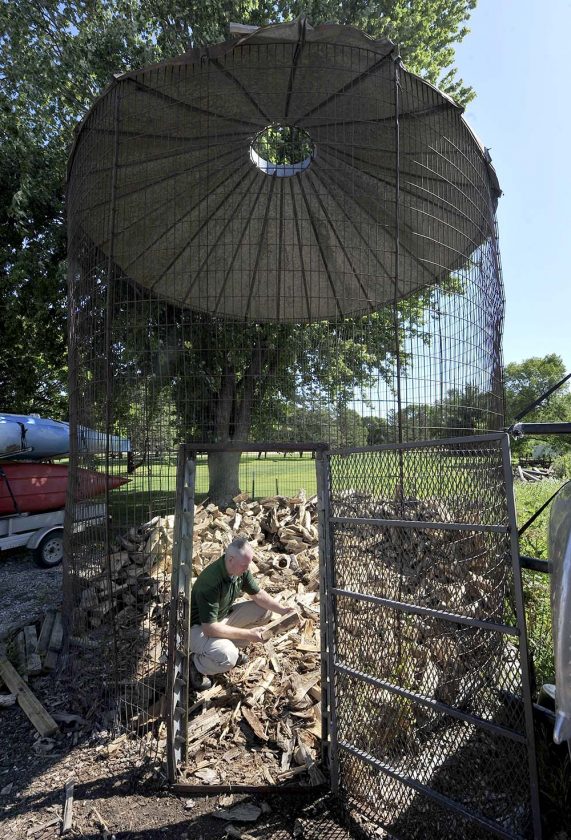 “It’s been a good camping year,” he said. “Even with the wet weather, Kennedy has had its best fiscal year ever.”

There’s another visible indicator of just how good the season has been. The repurposed corn crib where the firewood is stored until campers purchase it is nearly empty. It was full to the top when the season started.

He said that camping at the Gypsum City OHV Park southeast of Fort Dodge has also enjoyed a good season.

“Gypsum City is starting to gain some traffic,” he said. 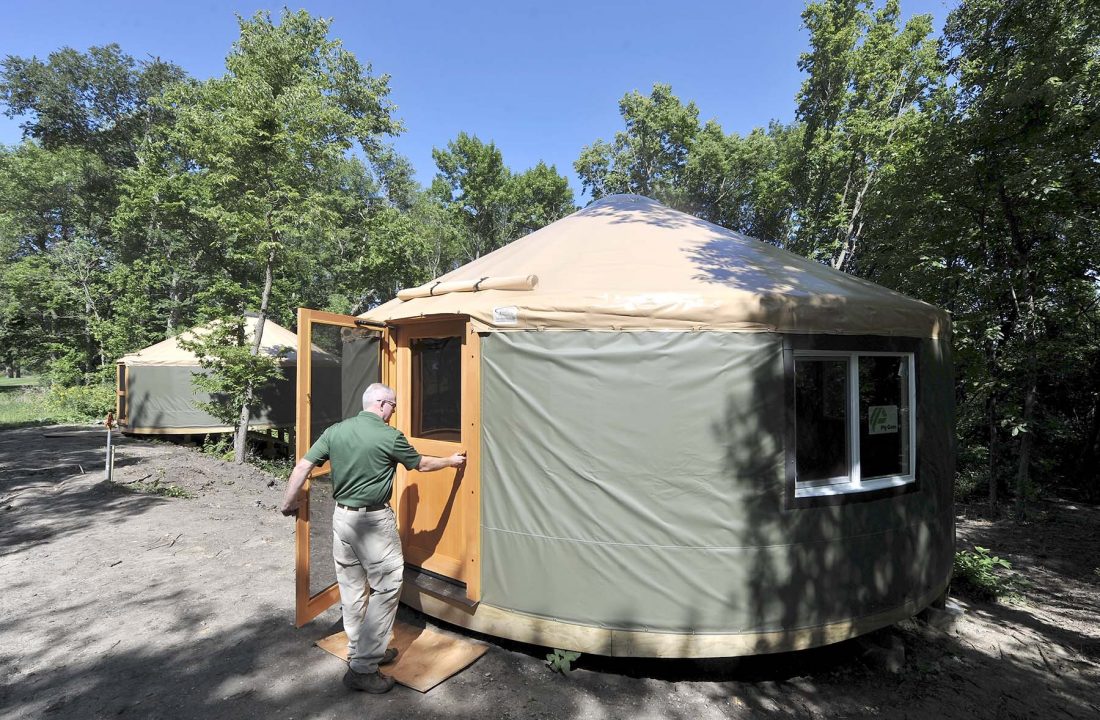 -Messenger photo by Hans Madsen
Webster County Conservation director Matt Cosgrove looks over one of the new yurts under construction in the campground at John F. Kennedy Memorial Park. The huts will be ready for use during the 2020 camping season.

The OHV campground is particularly popular with cross country travelers who like its proximity to U.S. Highway 20. People who visit Fort Dodge for major local events such as Shellabration also enjoy it.

One advantage the OHV park offers travelers is that spots can be reserved online. Kennedy, with the exception of four spots, is on a first come, first served basis and there’s a two week limit.

“Fifty cents of every dollar goes into our trust fund for improvements and 50 cents goes into general revenue,” Cosgrove said. “That’s the way were able to do all of this.”

“The more revenue we generate the more we can put back in,” he said.

Those improvements are visible. The staff is working on putting two yurts up along the west end of the campground. They will be ready to rent for the 2020 season, Cosgrove said.

Cecil and Joyce Phipps, who will tell you that they’re from Fort Dodge, “and Arizona” are among those who spend the entire season at Kennedy in one of the full season spots. Campers enter a lottery for them before the camping season.

“We sold our property here years ago and come back for the summer,” she said.

The couple spends their days enjoying their retirement, visiting Fort Dodge and socializing.

“I don’t think I’ve ever run into a grouch here,” she said.

Last Wednesday was an anniversary for Cecil Phipps. It marked the date he was released from a POW camp in North Korea.

An Army infantry veteran, he was captured by the Chinese.

He doesn’t hold a grudge. A made in China label doesn’t make him reject something.

“The people I dealt with didn’t make it,” he said.

She kids him about it.

Cosgrove is happy to have the couple there.

“It is home,” she replied. “They keep the park in good shape.”

They’re also guardians of a clutch of turtle eggs near their site.

“He sat there for an hour and a half watching her bury them,” she said. “People asked what’s wrong with Cecil, he’s just sitting there.”

“I’d never seen that done before,” he said.

The Phipps have protected the site with a flag and enjoy showing it to children camping.

They also enjoy having those children, and their pets around them.

One of the benefits of a full campground is that those campers also make use of the park, visit sites in Fort Dodge, buy food locally and enjoy local restaurants.

“Park use in general has been up,” Cosgrove said. “More people are using the trails too, to get to their destinations.”

“There’s a huge increase in water trail use,” he said. “Even through we were dealing with high water levels.”

A recent water float event hosted by Webster County Conservation drew 30 people for a float on the river, he said.

After the campgrounds close on Oct. 15, conservation staff will have a busy couple of weeks to shut it down.

“We have to winterize everything,” Cosgrove said. “We take the plumbing apart, drain anything with water in it and work on any improvements. Then we have a narrow window to trim trees and do other work before the set up for Lights at Kennedy starting on Nov. 15th.”

Before that though, the campers get to decorate for Halloween and visitors can come beg for treats. That’s scheduled for 5 to 7 p.m. on Oct. 12

One of the things that the Phippses and other campers enjoy so much is what happens when the conversation stops and they just sit inside their net mesh tent in front of their camper.

About the only thing you can hear is the wind rustling through the leaves and birds singing.

“This is pretty normal,” she said.