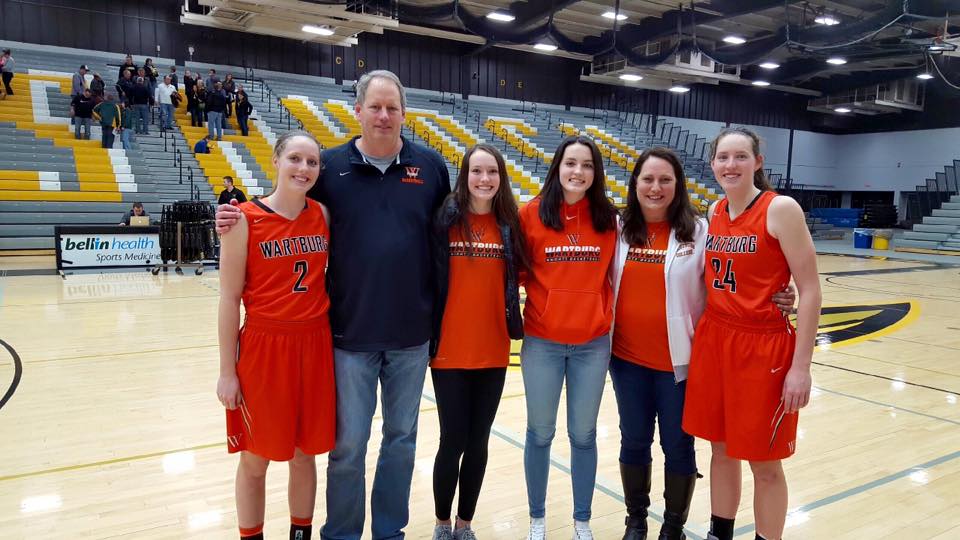 WAVERLY — The motto “your team is your family” definitely holds true for one special group on the basketball court.

With the quick nature of the sport, having a close connection to your teammate out on the floor can be the difference in winning and losing.

For three sisters at Wartburg College, that bond has only grown stronger with each passing year.

Megan and Miranda Murphy are in the midst of their senior seasons with the Knights, who are 9-0 and ranked fourth in the latest NCAA Div. III poll.

This year, the twins were joined by sister Riley, who is a true freshman on the squad.

All three were multi-sport athletes for North Polk High School, but basketball has been the common denominator to their growth as siblings both on and off the court.

Their parents, Mike and Bonnie (Willard) Murphy, are 1985 graduates of Fort Dodge Senior High who excelled for the Dodgers on the hardwood. Mike was a member of the 1984-85 state qualifying team and went on to success for Wartburg himself, earning four letters, three all-Iowa Conference honors and induction into the school’s hall of fame.

Bonnie, meanwhile, was part of Fort Dodge’s last girls state championship team in basketball, helping the Dodgers hoist the trophy in 1984-85. Her father, Gordon, was the assistant superintendent and curriculum director for Fort Dodge Community Schools for several years.

“We have been able to bond over the game of basketball,” Miranda said. “Growing up, it was something our family enjoyed doing all together, whether that was by going to watch games, practices or just shooting hoops in the driveway.

“My family is my biggest support system. My parents are always in the stands. I’m very blessed to have shared this experience with my family and have learned a lot about the game of basketball and life through them.”

Miranda, who was named MVP of the North Park Tournament earlier this season, is averaging team-bests in points per game (12.3) and rebounds (5.1). She was a second team all-conference performer last year, along with honorable mention All-American (WBCA) and was an academic all-conference pick for the Knights.

“We have started off really well,” Miranda said. “We have been working hard each day at practice to reach our goals throughout the year. Our team is a special group and it’s a great program to be part of.”

Megan, a four-year member of the basketball team like Miranda, also competed for the Knights on the volleyball court. She has scored 41 points with six assists and four steals.

“I am beyond blessed to have a family who is so supportive,” Megan said. “My parents never miss a game, whether it’s home or away. I have many other family members who come to games, as well as watch live streams. Basketball has allowed me to get to see my family more often since I don’t make it home much with our busy schedule.

“It has also allowed us to spend time together (as sisters). College gets really busy and outside of basketball, we have different schedules, so it’s nice knowing that we will for sure see each other daily.”

Wartburg reached the NCAA Div. III Women’s National Tournament semifinals in 2015-16, falling to Tufts. The Knights went 25-3 overall and 15-1 in the IIAC last year, winning both the season and tournament titles to reach the NCAA tourney once again.

“Our season is off to a great start,” Megan said. “We return everyone from last year, with the majority of us being seniors. I am really eager to see what this season has in store for us.

“I enjoy this team a lot and work hard to be the best I can be.”

For Riley, the decision to continue competing at the college level was one she made only after her senior season was complete. Initially, her plan was to attend Northern Iowa, but the opportunity to re-join her sisters was one that couldn’t be passed over.

“Playing with my sisters is very surreal and a once in a lifetime opportunity,” she said. “I am very blessed that I have been given this chance and I will not take a single moment for granted.

“Sharing these memorable moments with them has been so much fun and quite the experience. Not many people can say they played with both their older sisters, so I am extremely grateful that I get the chance.”

“Basketball is a big deal in our family and we all love the game,” Riley said. “Having this similar interest has helped us to form a very strong bond. I am very close to my sisters and I would even as far as to say that they are my best friends.

“Being able to play the game we love together has been such a blessing and this has allowed us to spend a lot of time together — a lot of time. But I wouldn’t trade these special moments for anything.”

Riley has played in four games, scoring seven points and grabbing three rebounds for the Knights.

Another sister, Jaedon, has helped North Polk to a 9-1 record and No. 8 ranking in Class 3A. A sophomore, she is averaging 11 points and leads the team in rebounding.

“I will remember the experiences we have had on the team off the court the most,” Megan said. “We have been lucky enough to travel internationally to Spain as well as various other states across the country. Those are the trips that I will remember most and am thankful that I got to share them with Miranda.

“It’s pretty neat getting to play on the court alongside her.”

Wartburg returns to the court on Friday, Dec. 29 when they host a two-day holiday tournament with Wisconsin-Superior, Wisconsin-Whitewater and Gustavus.