-Messenger photo by Hans Madsen Jeremy Pearson, supervisor of information technology for the Fort Dodge Community School District, holds a stack of Google Chromebook computers at the Fort Dodge Senior High recently. The high school and middle school are implimenting a one to one initiative for their students.

-Messenger photo Hans Madsen As part of a one to one initiative at the Fort Dodge Senior High and the Middle School, each student will be issued a Google Chromebook computer. About 1,200 of them are stacked up waiting to be distributed. 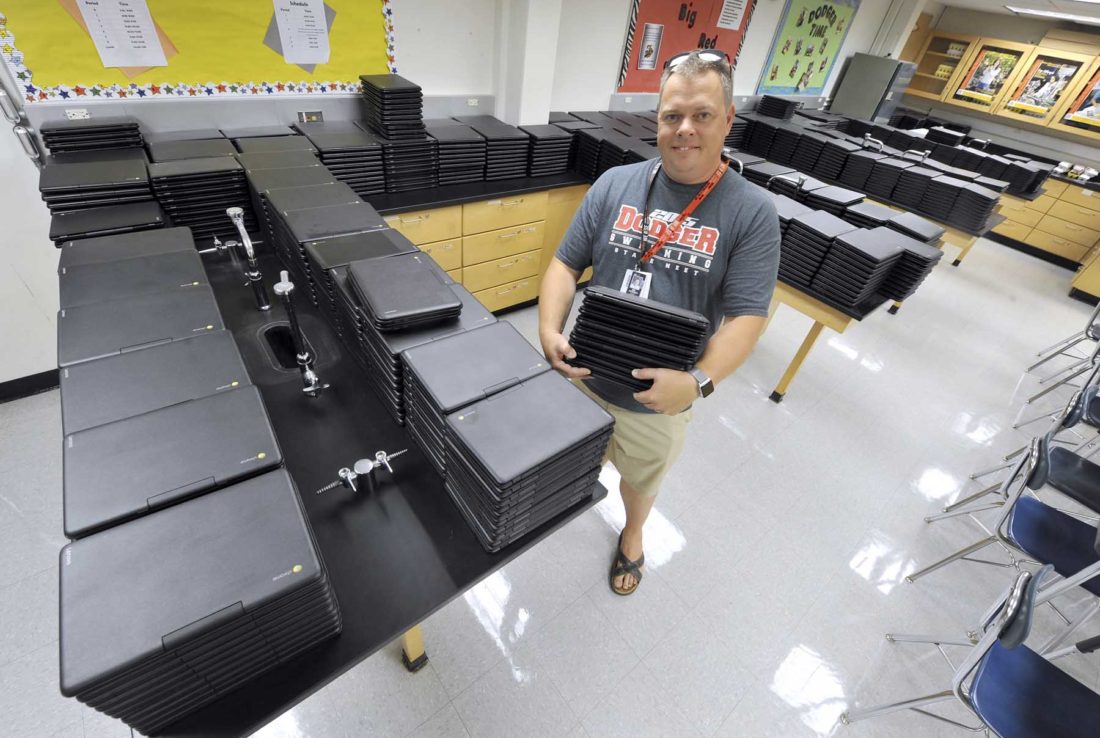 -Messenger photo by Hans Madsen Jeremy Pearson, supervisor of information technology for the Fort Dodge Community School District, holds a stack of Google Chromebook computers at the Fort Dodge Senior High recently. The high school and middle school are implimenting a one to one initiative for their students.

On the first day of Jeremy Pearson’s job as supervisor of information technology, Fort Dodge Senior High was in the final stages of connecting to the internet.

“I did the final walk-through of the network installation in this building,” Pearson said, referring to Senior High. “My first day on the job they had finished wiring the high school and were just getting ready to start hooking computers up to the internet and doing those things on a huge scale basis.”

“I am lucky enough because of that situation, I know where everything is hidden,” he added. “I know how all the connections work.”

Today, Pearson is helping to connect students, teachers and parents like never before with the introduction of a 1:1 initiative. 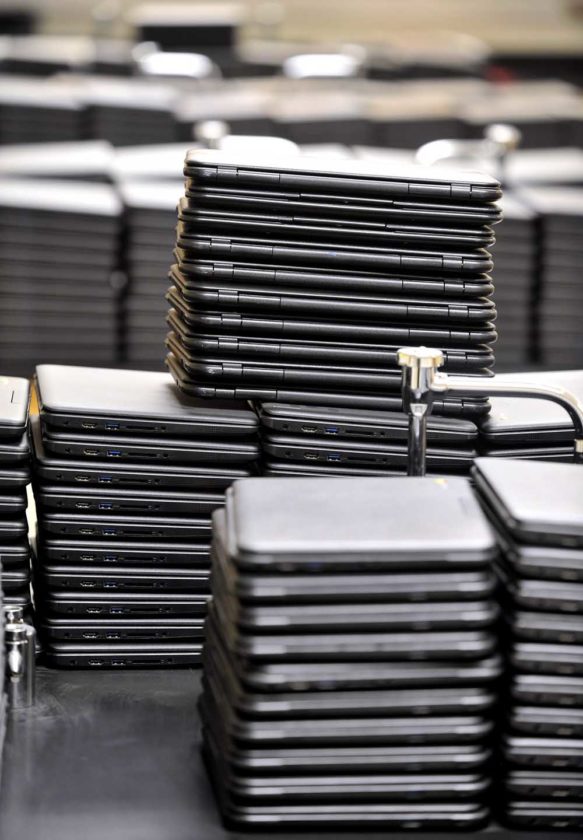 -Messenger photo Hans Madsen As part of a one to one initiative at the Fort Dodge Senior High and the Middle School, each student will be issued a Google Chromebook computer. About 1,200 of them are stacked up waiting to be distributed.

“We have kind of built things from the ground up,” Pearson said. “That’s been fun. We have done so many things in the 20 years I have been here. Every day is different and it sure makes it a great day.”

The 1:1 means that there is at least one computer for every student in the school. The device can be used wherever there is internet and also allows for some work to be done offline.

FDSH and the Fort Dodge Middle School will be 1:1 when students receive Google Chromebooks prior to the start of the school year.

More than 1,500 Chromebooks are to be issued, according to Pearson. 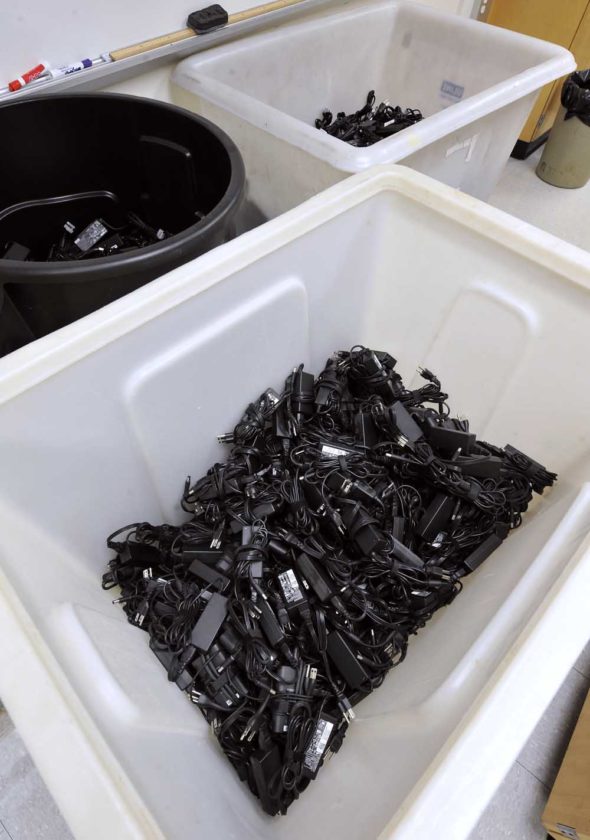 Only a portion of the laptops are new. Cost per device is $197. First-year cost for the Chromebooks is estimated at about $101,000.

“A third of the Chromebooks will brand new at Senior High,” he said. “The seventh-graders and 10th-graders will get brand new Chromebooks and that will be our every year rotation.”

“In seventh grade, we are going to hand you a brand new device and they will keep that device through ninth grade year or at some transition point in there,” Pearson said. “As a sophomore you will turn that one in, get a new one, and that one will last you the remainder of your time in the district.”

Used ones will be issued to the other grades.

The district has been using Chromebooks for the past five years. But the laptop computers were not issued to every student.

Although each student will be given a Chromebook to use, the device remains the school’s property.

The machines help students complete their work at school, from home, or anywhere else they might be, Pearson said.

“The device is just a device,” Pearson said. “It’s just another tool that goes in their backpack for being successful in education.”

“A teacher is not going to solely rely on the device,” he added. “It’s going to be available to them if it makes sense. If it doesn’t make sense, they won’t be using the device. So it’s just going to be another tool they can have with them all the time, every day as they need to. As kids go home, they will still have a device to function with to type their paper or if they have internet at home, they can do their research or walk out to Starbucks or any of those places with Wi-Fi, they will have a device to go with them to do their schoolwork.”

At the lower grade levels, there will be about one Chromebook per two students.

“All the carts we had in the district will get shuffled down to grades three and four,” Pearson said. “And then we will have enough devices to make an elementary set of one to one. They won’t take those home, but when they come to class the teacher will tell them they can take one as needed.”

“In grades k-2, we will have two to one, so we will have a set of 15, if you will,” he said. “At that point they are still focused on reading, they are going to want to partner up and collaborate with their neighbor. At those grades it’s more like stations. I can have six kids doing free reading, six kids on the computers, and six kids right in front of me where I am working in a small group during reading time. K-2, that’s kind of how we see it shaking out. Grades k-2, three through five will have carts in their classroom, grades seven through 12 will be one to one, where they take them home.”

The district has a plan in place for content filtering, Pearson said.

“The school board has directed us that we need to be able to control content onsite and offsite, so we have switched our content filter provider to be able to provide content filtering at home,” Pearson said. “So when the kids are offsite, when they are not at school or on the bus, they will still be filtered for internet. They are still going to have all the normal blocked categories.”

“Whether or not we want to loosen it up, so let’s say during the day, we are blocking social media websites, but at night we feel it is little more open, kids can do that on their device if they need to. We can allow that at night or off school grounds. We are able to do that.”

Pearson said the school building administrators will have conversations with students when content not tied to education is being used frequently.

“Our content filter provider is a new area, new piece of software,” Pearson said. “They are going to allow parents to sign up so they can get a report on their kids use of internet outside of school. They can see if they are doing all kinds of noneducational material or nothing that is really tied to education I can see that and have that conversation with them, and then at some point, the parents will be able to have some sort of control on what happens outside of school as well.”

Pearson said the laptops are durable.

“The latest models — they have been getting sturdier and sturdier as time goes on,” he said. “This will be our fifth year deploying Chromebooks, and they are night and day, stronger than when we first started.”

He said students would be rewarded by taking care of their device.

“We are taking it at face value that the kids will pay for the repairs and be good citizens with their devices,” he said. “Now if my son comes in and he’s on his third or fourth screen and for some reason I haven’t paid any of those repair costs, we are going to look at that and go ‘I don’t think we will fix this good one, we’ll give you one that has been seasoned.'”

Pearson hopes the Chromebooks will improve the educational experience for teachers, students and parents.

“Everyone is so connected now,” he said. “This is just another tool that’s available to them. We hope it improves communication. There is responsibility there for the kids and the parents as well. It’s giving them the device that they can have available to them at all times.”

Chromebooks will be distributed to FDSH students Aug. 21 to Aug. 24 in the science rooms

• If a student is unable to attend on the assigned day, he or she may attend one of the other dates.

Seventh- and eighth-grade students will receive their Chromebooks during orientation at the Fort Dodge Middle School Aug. 30 and Aug. 31.

Students must be registered for school and have both the technology usage form and damage protection plan form turned in before receiving their devices. In order to participate in the damage protection plan, the fee must be paid by Aug. 18. Enrollment in the plan will not be allowed after this date.

The damage protection plan is $30 with a $5 discount for parents/guardians who watch the online training video available under News at fdschools.org.

Parents/guardians can complete the forms and make payment at the Central Administration Building, 104 S 17th St., from 8 a.m. to 4:30 p.m., Monday through Friday.