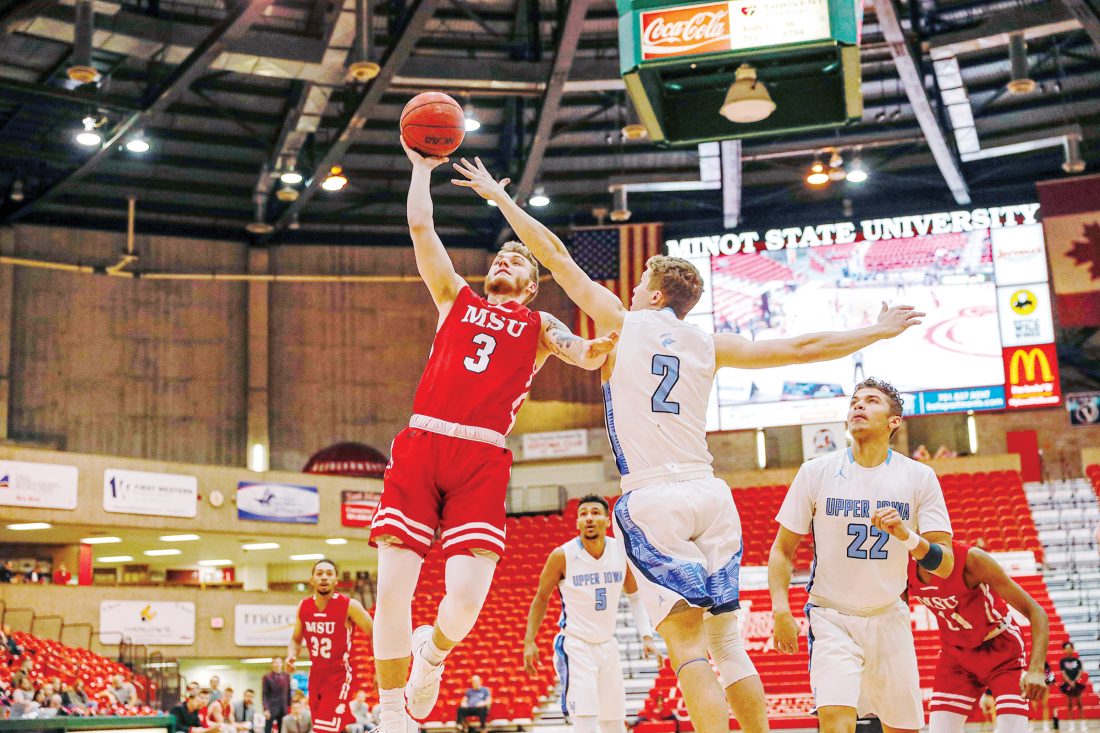 Beisch’s scoring binge in the opening round of the Northern Sun Athletic Conference Tournament against South Division champion Sioux Falls capped a brilliant senior season. Ultimately, the Beavers fell short and were ousted by a final of 79-68.

The details of the contest are simultaneously vivid and blurry to Beisch, a 2016 Fort Dodge Senior High graduate. He played all 40 minutes, made 10 field goals, and almost single-handedly kept Minot State close to the Cougars as a heavy underdog.

It was the kind of effort the man Beisch calls a “close family friend” — FDSH boys assistant coach Willie Williams — would’ve been proud of at the end of the day.

“Willie has always been like a big brother to me — ever since my sophomore year (with the Dodgers) when I was just starting to find my way (as a varsity player),” Beisch said. “It goes beyond basketball. Our families are close. Our friends are close. There are a lot of ties.

“We always work out together when I come back (to Fort Dodge). I really look up to him, both because of basketball and the man he is.”

On the same day as Minot State’s finale — Feb. 26 — word quickly spread that the 28-year-old Williams had fallen severely ill at home. He was eventually life-flighted to Des Moines, where doctors performed emergency surgery to relieve pressure on Williams’ brain.

He had suffered a stroke.

“I don’t remember exactly when I’d heard about it, but I knew (by tip that Williams was in the hospital),” Beisch said. “I was thinking of Willie during that game, and trying my best. I always do anyway, but I wanted to make sure I was giving everything I had. He would expect that, win or lose.

“I didn’t have a lot (of specifics on Williams’ health status) at the time. It was all kind of up in the air. All I could do was go out there and play hard for him.”

Beisch’s final time on a college court was both impressive and fitting. The former Dodger and Iowa Lakes Community College standout averaged 19.5 points this winter for the NCAA Div. II Beavers. The Sioux Falls game marked the 16th time in 2019-20 Beisch had scored 20 or more points in a game.

The 28 points were just two shy of his career high, which Beisch reached twice during the regular season.

“The year started out well for us, but things didn’t go our way once we got into (the conference portion of the schedule),” Beisch said. “Personally speaking, my role increased offensively — but I knew that coming into the year. I spent the entire offseason training for being (a main scorer). I expected it and wanted to embrace it.”

In Beisch’s two years at Minot State, “I was always pretty vocal. That really didn’t change this year (compared to as a junior). I’m always in the gym or working out, so I just did my best to show the younger guys how to follow a good routine.”

Beisch finished in the Top-10 on FDSH’s all-time scoring list, then racked up 992 points at Iowa Lakes in two seasons. A year ago, Beisch averaged 13.5 points while starting in all but two games for the Beavers.

Beisch is graduating this spring with a business degree. He’s also in the process of shopping for agents and testing the professional waters overseas.

“Basketball is all I’ve ever known,” Beisch said. “I’m going to give it a run (at the next level). I’m just not ready to be done.

“I’ve always tried to work as hard as I possibly can. Through the highs and lows, you just keep pushing yourself. It hasn’t been easy, being away from my family for so long (these past two years). But basketball and going to class helped me get through.”

Even through the adversity of a 10-19 campaign, Beisch is “incredibly grateful” for the opportunities Minot State afforded him.

“Both coaches (at Minot State and Iowa Lakes) have been great influences in my life,” Beisch said. “I’ll always stay in contact with them. I’ve learned a lot about myself and grown as both a player and as a person.”

Beisch returned to Fort Dodge for nearly every holiday break while at MSU.

“I’m always hitting up Coach (Tom) Daniel or Chuck (AFES director Charles Clayton) so I can get in the (local gyms),” Beisch said. “I get back home as often as I can.”