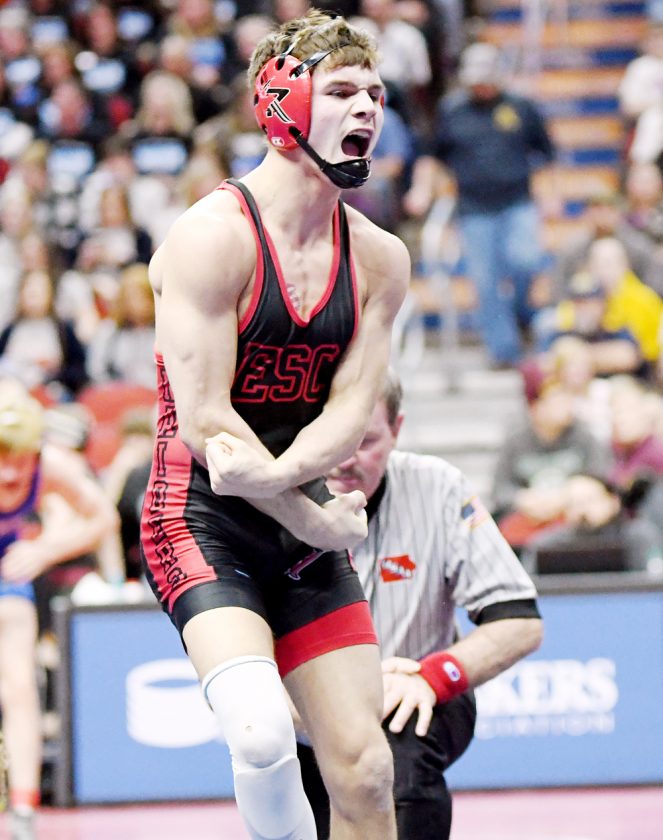 Over 365 days later, the feelings were completely different for the East Sac County senior.

Thomsen scored a fall vs. Larsen from AC-GC with a second remaining in their Class 1A 132-pound first round match here Thursday evening. The win advanced the Raider to the quarters, where he meets Don Bosco’s Easton Larson.

“The pin felt amazing, especially after losing to him last year,” Thomsen said. “Getting revenge felt so good.”

“The atmosphere is indescribable,” said Thomsen, who has been competing on the mats since he was four years old. “Last year, I was very nervous but I was laser-focused (Thursday). The amount of people for the early sessions is super surprising and shows how important wrestling is in Iowa.”

Larson advanced with a first period fall of his own, as the senior is 40-4 after besting Mitchell Moore of Wapello. He placed fourth last year in this same weight class at state.

Pocahontas Area’s Dane Johnson, the lone qualifier like Thomsen for his school, earned a pin in the heavyweight division. The senior caught Brady Canada of Avoca-AHSTW in the second period, ending the match in 3:34.

After surrendering a reversal to Canada, the junior worked for over a minute to get his own reversal before trapping his opponent on the mat.

Johnson, now 40-5, faces Chandler Redenius from West Hancock in the quarters. Redenius moved on with a fall in 1:49 over Missouri Valley’s Connor Murray.

Three of the four South Central Calhoun wrestlers remained alive, including two on the championship side in Jordan Khommanyvong and Blake McAlister.

Khommanyvong, making his state debut, scored a 5-1 decision over Damon Schmid of Kingsley-Pierson at 138 pounds to improve to 35-3. The junior now faces Dominic Lopez from New London, who advanced with a narrow 3-2 victory.

“I was really nervous,” Khommanyvong said. “But (Coach Lance) Schultz just told me to wrestle my match and my pace, and it all worked out. Waiting all day was pretty hard only because we couldn’t eat hardly anything.

“The match was a good one for me to open up on. I had him reacting to me and scoring off open opportunities. I just wrestled my match like always and if I keep doing that, good things will happen.”

McAlister, a returning state qualifier for the Titans, downed Iowa City Regina’s Aidan Udell, 5-2, at 160 pounds. The sophomore gets Colfax-Mingo’s Trystin Ross after he scored a 23-second fall.

Kevin King remained alive at 113 pounds, rebounding from a 7-1 loss in the first round to Cael Bridgewater of North Linn. King topped Ethan Argo from Belle Plaine, 14-4, in the consolations.

At 220 pounds, Brian King dropped two bouts to conclude his senior season 42-10. He was pinned by Eagle Grove’s top-seeded Joel Mendoza in 2:13 and fell to Tallen Myers from Southwest Valley, 8-3.

West Bend-Mallard’s Donavon Hanson and Connor Fehr advanced on the consolation side after tough decision losses.

Hanson, a junior, fell 4-2 to unbeaten Underwood freshman Gable Porter at 106 pounds. He rebounded with a fall in 3:39 over Paul De Jong from North Mahaska.

Fehr, a senior, was also bested by a final of 4-2 at the hands of Don Bosco’s Carson Tenold at 170 pounds. He bounced back by earning a wild 11-10 decision over Cael McLaren of Council Bluffs St. Albert.