BACK IN THE MIX 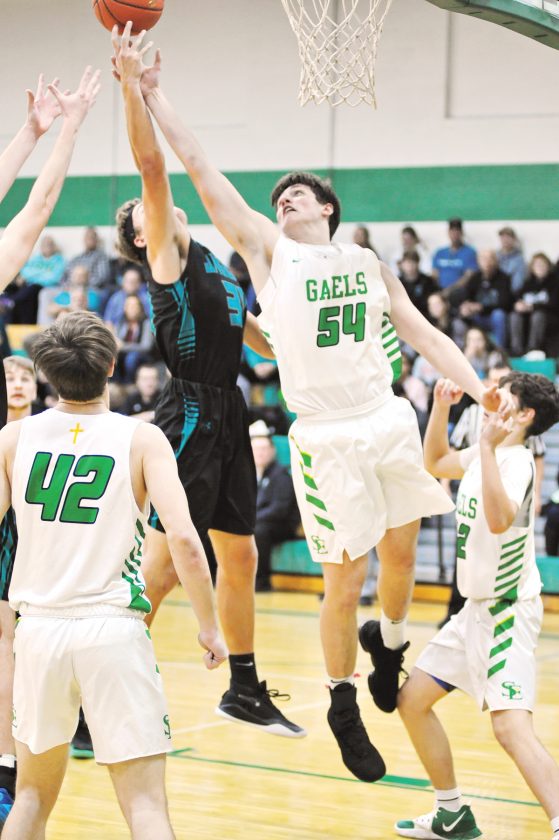 —Photo by Tom Vogt St. Edmond’s brock stanek goes up for a rebound against Southeast Valley in the Gael gym on Tuesday night.

Less than two weeks ago, Southeast Valley’s Kolson Kruse was being rushed to the hospital to have his appendix removed.

On Tuesday night, the sophomore made his season debut in impressive fashion, scoring a game-high 17 points to lead the Jaguars past St. Edmond, 56-45.

Kruse, who averaged eight points per game last year, accounted for 11 in the first half as the Jaguars (2-1 overall) jumped out early.

Aaron Graves, also an 10th-grader who has committed to the University of Iowa to play football, added 10 points, including a pair of 3-pointers.

“We were getting ready to head out to a scrimmage the Saturday after Thanksgiving and I got a call,” said Southeast Valley head coach Kyle Johnson, who is a Fort Dodge Senior High graduate. “It’s just great to have him back. He’s a tough little guard that can knock down some shots and takes care of the ball well.”

“I thought we came back well,” SEHS head coach Adolph Kochendorfer said. “We just had too many turnovers. We had some chances, but we missed some good shots. I also thought (Southeast Valley) wanted it more. They were more physical than we were.

“We knew coming in that is how they would play. You can talk to the kids, but they have to go out and go through it themselves, try to figure it out.”

The Jaguars scored the first eight points of the game and led by as many as 17 at 23-6 early in the second quarter. Five different players scored in the opening eight minutes, including Kruse and Robert Jepsen off the bench.

“For one quarter, we look like we’ve been playing all year,” Johnson said. “The next, it looks like our first game out. It’s just about building on the good things you do, watch film and watch what you do wrong.”

The Gaels were able to slowly chip away at the deficit, cutting it to two with just over five minutes remaining in the fourth when Drew Schaeffer converted a three-point play.

Schaeffer, battling a leg injury, had all five of his points in the fourth.

“We just didn’t get over the hump,” Kochendorfer said. “We got some stops when we needed them, but we just couldn’t make that next shot or that next pass.

“Still, I thought Hayden had some good looks, Cael (Kolacia) knocked down a couple shots and Brock (Stanek) did too. We’ve just got to look more at the basket.”

The Jaguars travel to Emmetsburg on Friday night, with the Gaels heading to Webster City.