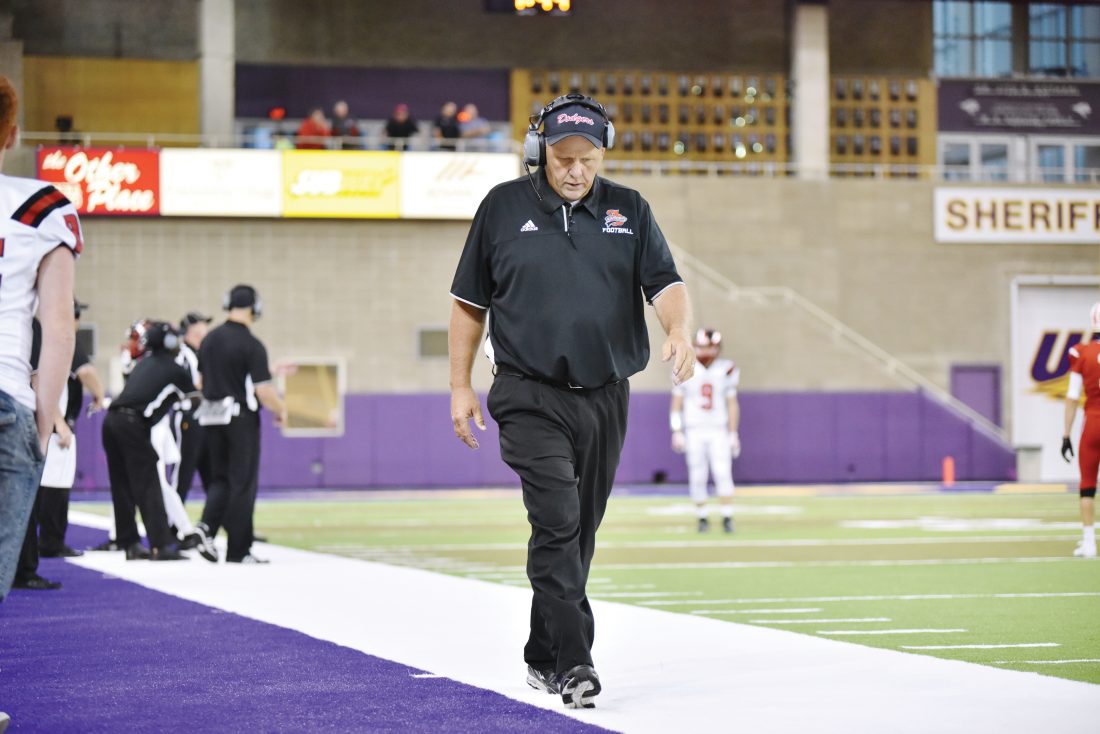 Messenger photo by Britt Kudla Fort Dodge’s Matt Miller coaches from the sidelines at the UNI-Dome in Cedar Falls. After 16 seasons, Miller is stepping down as the Dodgers’ head football coach.

Yet his 16-year tenure, by both his own admission and even design, was never about the success he experienced on the field.

Miller formally announced his retirement on Wednesday, bringing an end to a career filled with records and benchmarks that set a new standard on the gridiron at this small Class 4A school.

“The kids. The relationships. The friendships,” Miller said, wiping a few tears from his eyes as he surveyed a mostly-empty coaches office typical of a mid-November day inside Dodger Stadium. “It was never about the wins or the playoffs or anything else. That was both a credit and a testament to my staff and the student-athletes we had go through our program. I honestly believe what we accomplished was a direct result of investing in and believing in each other — not just as football coaches and players, but as people.

“I can’t imagine there being a luckier person in Fort Dodge than me. I came here over 30 years ago just hoping for a chance to prove myself as a coach. Looking back, given the people I’ve been fortunate enough to work with both (within the program) and at (FDSH), I couldn’t have asked for more. I learned things and have memories that an undefeated state championship season could have never given me.”

The 55-year-old Miller briefly considered stepping down last season after his son, Drake, concluded his decorated Dodger career at quarterback.

“I just wasn’t ready, though,” said Miller, who served as an assistant to Mike Woodley and Sam Moser for 17 total seasons before being promoted to head coach in March of 2004. “I’d help coach (the 2019) seniors all the way back to their fifth grade year, and I wanted to see them through. When I talked to Sam, or (former coach and athletic director) Don (Miller), or (former wrestling coach and administrator) Ed (Birnbaum), or (former coach and AD) Tom (Kinseth), they all told me, ‘you’ll just know.’

“Am I sure that this is the right time? Not entirely. But I do feel it now more than ever — some of the day-to-day stuff gets to me where it didn’t used to, and I don’t want to short-change the program or wear out my welcome. It means too much to me. I remember Sam telling me (when he retired in 2003) that you never want to stick around too long and see everything you worked for fall apart, just because you didn’t know when to get out of the way. After 33 years, I need to step aside and let someone else take over.”

“He’s devoted countless hours to the development of thousands of young people in our community,” said Astor, a former FDSH assistant himself who had two boys — Geoff and Jonny — on this fall’s team. “When all is said and done, you don’t remember the wins and losses as much as the relationships. Matt is a perfect example of that.

“He never wanted to take full credit for the achievements, or helping kids out when they needed it, or just being there for them whenever they needed advice or guidance. Matt does so much when no one else is looking. He takes care of the little things that pay off in the end. And I know he has the respect of fellow coaches and officials across the state.”

Seven different Dodger squads won at least six games and reached the playoffs under Miller’s direction, and Fort Dodge really began to hit its stride from 2009 on. The Dodgers have accumulated a 58-49 overall record over the last 11 seasons, and the most recent decade of football — which ended earlier this month with a postseason loss at No. 5 Cedar Rapids Kennedy — was the Dodgers’ most successful stretch record-wise since the era of the 1940s.

As a result, Miller became the school’s all-time leader for career victories — finishing a single win ahead of Hall of Famer Forrest Marquis.

“You can put an asterisk by that,” Miller said sheepishly, adding the timing of his announcement is “strictly a coincidence” vis a vis setting the record. “There’s only one ‘legendary’ coach from here, and it’s Coach Marquis. I honestly wouldn’t even know about where I stood on that list until I started seeing it mentioned in The Messenger.

“Again, that’s all about my assistants and the players and their families. They’ve helped to make Fort Dodge football what it is today. You can’t and you don’t do it alone. And I’ll say this: I’ve been here for plenty of lean seasons, too — both as an assistant and as a coach. But the attitude and work ethic of the kids has always been very comparable, whether we were 2-7 or 7-2. That’s something coaches take a lot of pride in: your record is your record and it’s the bottom line, but that stuff takes a back seat to how these young men are treated and the lessons they learn working toward a common goal every fall.”

Miller graduated from Aurelia High School in 1982 and Morningside College in 1987, where he was an offensive lineman.

“I knew I wanted to be a teacher and a coach at 14 years old,” said Miller, who went 16-0 against Mason City and was a combined 25-6 versus long-time rivals Ames, Marshalltown and the Mohawks since 2009. “How many people can say that? I was influenced so much by (Hall of Fame Aurelia coaches) Myron Radke; my uncle, Gaylen Miller; and Duane Buttenob. They were tremendous role models at a very young age. I realized more and more as I got older how fortunate I was, being around them as a kid.

“Then I get here after graduating from Morningside and work under two more Hall of Famers in Mike and Sam. They showed me what it meant to be a Dodger: not just in the toughness you showed on the field, but what your role and responsibility was as a coach and a teacher away from it. And that was something that immediately (resonated with) me.”

The opening of FDSH’s head football position for just the third time since 1988 creates immediate discussion and speculation regarding Miller’s replacement. The logical choice would be Nik Moser, who has served as an assistant on Miller’s staff since 2008.

Moser — Sam’s son and a 2001 Senior High graduate — was a former Dodger grid standout, state track champion, and starting Iowa State University defensive back. He’s been both a defensive and offensive coordinator for Miller during the program’s golden years.

“Nik is ready,” Miller said. “Nik and (defensive coordinator) Blake (Utley) have done so much for this program, and they aren’t alone. The staff that’s currently on board is the best we’ve ever had here top to bottom. I truly believe that. I value all of them, and the roles they’ve played in making Fort Dodge football what it is today.”

Miller added “it’s impossible” to single out anything or anyone else, from the community support to the efforts of his players, the cooperation of the administrators, and the memories the town has shared over the last 16 seasons.

“I started thinking about all of that a few weeks ago, and when you take a step back, it’s almost overwhelming,” Miller said. “We’ve had one special run. I wouldn’t trade it for anything. Fort Dodge has been so good to me and my family; if you’re looking for a town that truly cares about its people, you’d be hard pressed to find a better place.

“The businesses, my staff, the young men, the superintendents with Dr. (Jesse) Ulrich right now, the ADs through Kevin and principals with (current FDSH leader) Staci Laird — being a Dodger and calling this our home for over 30 years has been a privilege.”

Miller will continue to teach at FDSH through at least the end of the year. He and his wife, Staci, live in Fort Dodge.

Drake is a freshman quarterback on the Grand View University football team, and their daughter, Tehya, is a student at the University of Northern Iowa.