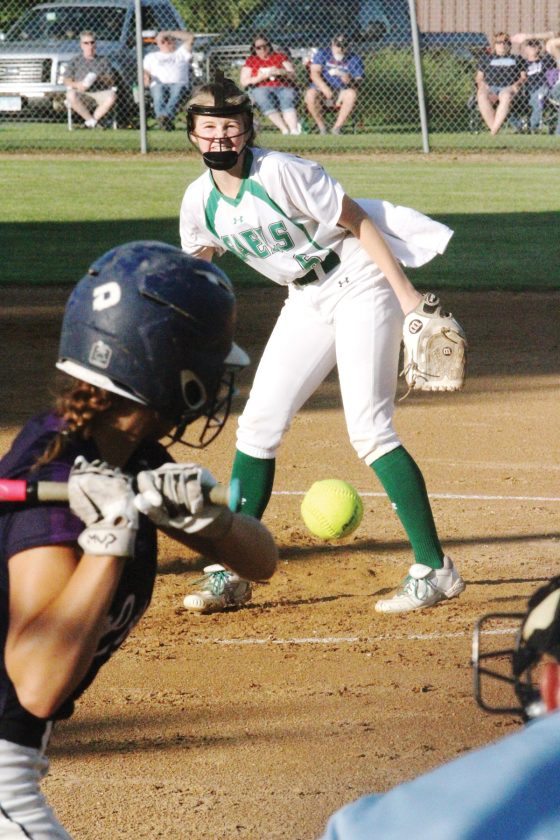 Photo by Corey Meints, for The Messenger Ella Vratny pitches for St. Edmond against AGWSR in Ackley during a Class 1A regional contest on Wednesday.

ACKLEY — There was absolutely nothing that could rattle the St. Edmond softball team here Wednesday night.

Prior to the first-pitch in this Class 1A, Region 8 contest, heavy rains hit the area. But the Gaels remained focused on the task in front of them — sixth-ranked AGWSR.

A year ago, the Cougars knocked St. Edmond out in convincing fashion in a regional final on their way to finishing second at state. And while the end result was the same, getting there took a much different path.

AGWSR (19-6 overall) plated the game-winning run in the bottom of the seventh on a double by Rachel Sicard that drove in Mady Mausser, giving the Cougars a thrilling 2-1 victory.

“I’m just so proud of these girls, especially the seniors,” an emotional Nick Clark said after the game. “They have meant so much to this program and to me. What they have given to this team will continue on for years to come.”

Devyn Scott, Abby Landwehr, Macey Mason, Erin Flattery and Jacque Oberg played for the final time as a Gael. Scott, Mason, Flattery and Oberg were all multi-year letterwinners for St. Edmond (13-14), helping the program to two regional finals and almost 50 wins over the past four seasons.

“Words cannot describe what those seniors mean,” Clark said. “They have put our program back on the right track through their hard work and determination.

“They have been incredible role models and leaders for the younger girls.”

The last time these two schools met, AGWSR plated five runs in the first inning to take command. The Cougars were able to get their No. 2 hitter on base in the first, but SEHS ace Ella Vratny buckled down and retired the final two batters.

Vratny also worked out of a bases loaded jam in the fourth and recorded three consecutive outs after putting runners on first and second in the sixth.

“Ella was just a rock out there,” Clark said. “And our defense behind her was incredible. The girls played just like I knew they would: focused and determined.”

Makenna Kuper gave AGWSR a 1-0 lead in the third with a solo homer over the fence in right. Kuper, a sophomore, has 10 home runs on the season.

Opposing Vratny in the other dugout was Taryan Barrick, the same all-state pitcher who tossed a no-hitter vs. the Gaels last summer. Barrick finished with 12 strikeouts on the night.

“AGWSR is a great team with a great pitcher,” Clark said. “We knew what we were going up against, but there was never a doubt in any of the girls that we could compete with them and beat them.”

Down by one and facing elimination in the seventh following two quick outs, St. Edmond went to work. Vratny singled and was lifted for Landwehr, a state track medalist, on the bases.

Gracie Harvey, a ninth-grader, drove a 1-2 pitch by Barrick to the fence in right for a triple as a jubilant Clark waved Landwehr home.

“Their outfielder was playing in all night,” Clark said. “I knew Gracie had that in her. She stayed back and drove that pitch. What an incredible moment for a young kid to have.”

AGWSR answered in the bottom of the seventh. Homeyer drew a walk before Vratny was able to get two outs. Just when it seemed she would get out of the inning, Sicard connected on a pitch to the outfield grass that allowed Mausser to score.

“I just can’t say enough about these girls,” Clark said. “They gave it their all. We had incredible support all season, especially here (Wednesday night).

“I am so sad to see these seniors go and have this season come to an end.”

Along with Harvey’s triple and Vratny’s single, Flattery, Jocy Timmerman and Rylee Kinney each had a base hit.