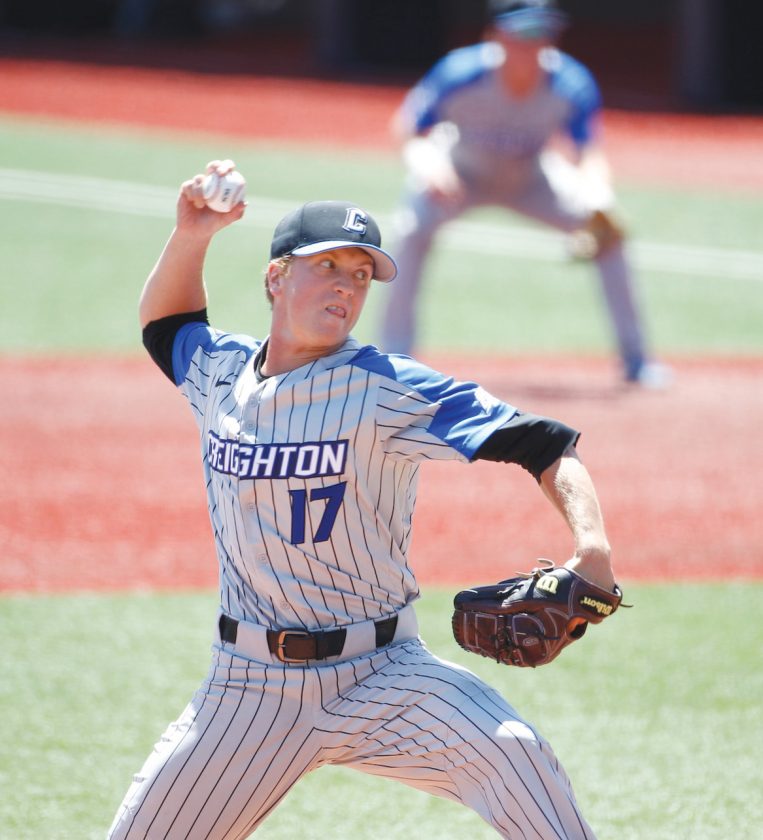 —Photo by Steve Dipola Creighton’s Evan Johnson throws a pitch during the NCAA Regional Tournament. Johnson is a former Iowa Central pitcher who has family that lives in Fort Dodge and the surrounding areas.

A week ago, Evan Johnson was helping the Creighton baseball team eliminate defending NCAA Div. I national champion Oregon State from the postseason.

So, what did the former Iowa Central standout do to follow that performance up with?

He signed a minor league contract with the Seattle Mariners.

Johnson, the son of Kurt and Jacy (Ollinger) Johnson, reported to the training facility for the Major League Baseball team on Saturday.

“It feels good,” Johnson said. “I’m happy I get an opportunity. That’s all I really wanted to just try and make the most of it. I’ve always dreamed of this as a kid and now it’s real.”

As a junior after transferring from Iowa Central, Johnson worked out of the bullpen, making 13 appearances with eight strikeouts in just over 13 innings pitched.

“I struggled to build a consistent role on the team and be a contributor,” he said of that first season. “I went to summer ball in St. Cloud and I knew I had to make an adjustment there to come back and be considered for a good spot in the rotation.

“My summer league coach let me start after I asked him and I proved that I could be a starter. When I came back to Creighton, they told me that I would have a spot in the weekend rotation. I had added 15 pounds over that summer to help my ‘stuff.'”

Johnson was on the mound for two of the biggest wins this past season for Creighton. He earned the start in the Big East Tournament final vs. Xavier, striking out nine as the team went on to post a 9-8 victory.

It was also Johnson who was given the ball to start an elimination game in Corvallis, Oregon last Saturday against the Beavers. He went five-plus, allowing just one earned run with three strikeouts as Creighton was triumphant, 4-1.

“The Oregon State game was a challenge and I think we played better when we were challenged,” he said. “There were a lot of Oregon State fans there, but it wasn’t so much about how many were in attendance, but the energy that they had knowing it was an elimination game. And when you have a successful program like they do, the fans are very passionate.

“I remember not being able to hear anything but the crowd in certain moments when we had our backs against the wall. The best way I thought to approach it was instead of fighting the intensity, use it to our advantage and let it fuel us. I think the rest of the team did that too.”

The season would come to an end for the Bluejays two days later at the hands of Michigan, as Johnson made his final appearance in relief.

Creighton was ranked in the final three regular season polls, won the conference regular season title to go along with the league tournament, and finished with a high RPI.

After a standout career at Gilbert, Johnson opted for Iowa Central, following in a long line of family members who have made the same choice. His father, a 1990 graduate of Fort Dodge Senior High, also attended Iowa Central, as did grandpas Art Johnson and Keith Ollinger, uncle Kyle Johnson and cousin Nolan Johnson, who is currently a member of the Triton baseball team. Grandman Rose Johnson went through Iowa Central’s dental assistant program, as well.

“Iowa Central played a huge role in my developmental process,” he said. “I remember my freshman year, making the travel roster was my goal. And I remember calling my dad when I did and it was a big moment for me and my family.

“I learned a lot there, not only as a player, but as a person. It was through hard work and discipline that myself and my teammates accomplished something special. The coaches and mentors I had at Iowa Central helped me tremendously and I am forever grateful.

“Iowa Central provided me with a great place to grow as a student-athlete. They go a long way to help teams and individuals reach their goals. I will always be proud to be a part of that.”

Johnson went 7-4 with 61 strikeouts in two seasons for the Tritons after earning all-state honors his senior year at Gilbert where he went 9-0 with 103 strikeouts in just under 64 innings.

Over his four years at Gilbert, Johnson went 25-5 with 246 strikeouts. He was 11-3 with 82 strikeouts in two seasons with Creighton, giving him 43 wins and 389 strikeouts over the past eight years on the mound.

Jud Ollinger, Jacy’s brother, lives in Fort Dodge, and another brother, Cole and Kendra (Loots) Ollinger, live in near Lehigh.

“It was great to be close to family when I first started college,” Johnson said. “I had support close by and I was very familiar with the area. Being so close allowed my family to come watch games. Some players don’t get that opportunity, so it was great to get to experience it all the time.”