-Photo by Kriss Nelson
Andrew Vogel, regional sales manager for Prinsco points out some of the features of the agricultural tile the company manufacturers. One of Prinsco’s largest hubs is located in Fort Dodge.

-Photo by Kriss Nelson
Tile is stacked and ready to be delivered to the field at one of Prinsco’s main hubs in Fort Dodge. It is estimated that several million feet of tile is sold out of the company’s Fort Dodge location each year. 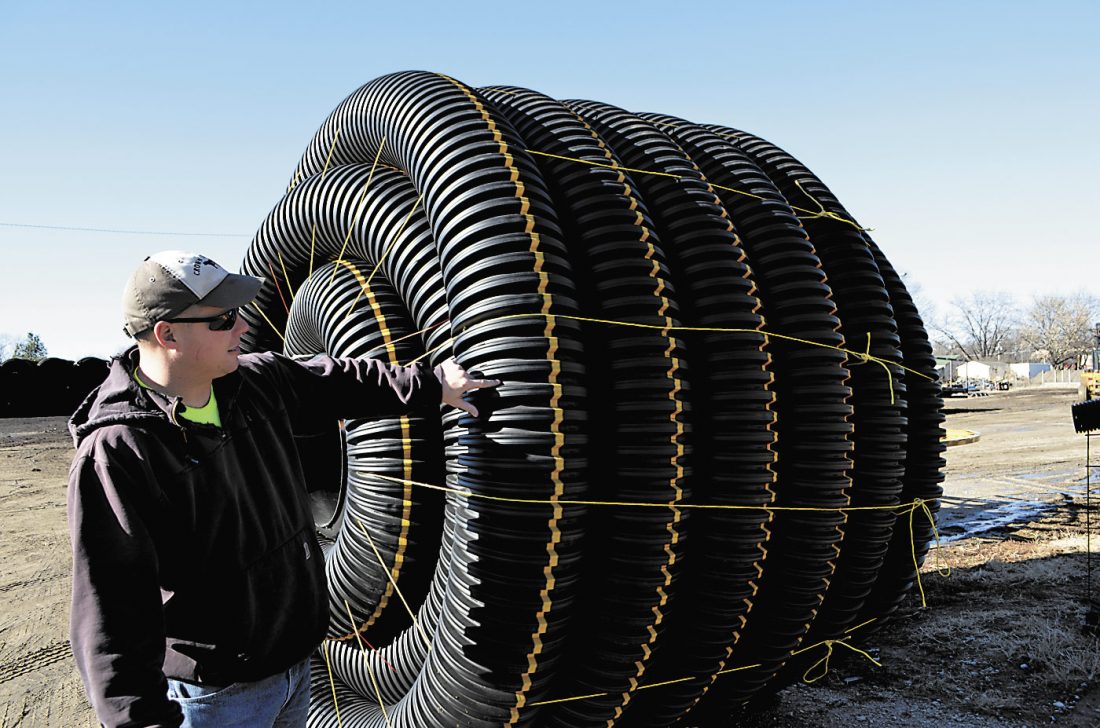 -Photo by Kriss Nelson
Andrew Vogel, regional sales manager for Prinsco points out some of the features of the agricultural tile the company manufacturers. One of Prinsco’s largest hubs is located in Fort Dodge.

Installing agricultural tile is a large part of making better use of the farmland we have.

Prinsco, a water management solutions company with several locations across the Midwest and California, takes pride in the claim they are the industry leader in agricultural water management industry.

“We are a heavily based ag company,” said Andrew Vogel, regional sales manager with Prinsco. “We do commercial pipe as well, such as underground detention and retention systems and sanitary pipe, but majority of our business is ag.”

Prinsco is a third-generation, family-owned company that began in 1975 as a manufacturer of cement tile.

Vogel said it was shortly after their start, they began manufacturing plastic products and according to the company, this move was done in order to better serve the needs of the Midwestern agricultural market. 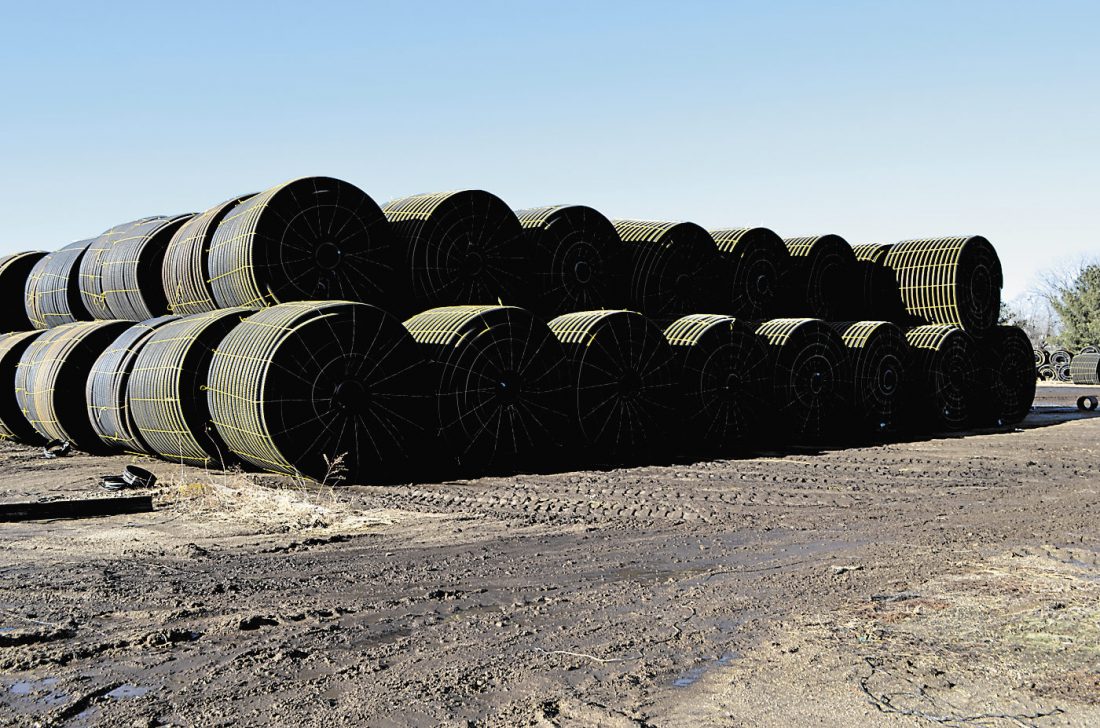 -Photo by Kriss Nelson
Tile is stacked and ready to be delivered to the field at one of Prinsco’s main hubs in Fort Dodge. It is estimated that several million feet of tile is sold out of the company’s Fort Dodge location each year.

The company’s main headquarters are located in Willmar, Minnesota, with a manufacturing plant nearby in Prinsburg, Minnesota.

The company, some years later, decided to expand with the addition of a new location in Fort Dodge. Although no manufacturing is done at the company’s Fort Dodge location, it is still one of the main hubs for Prinsco.

“Fort Dodge is one of our main yards,” said Vogel. “It was one of the first yards we ever had. We may not manufacture here, but we sell everything out of here and serve a radius of one-and-a-half and sometimes up to three hour radius of here.”

Vogel estimates the Fort Dodge yard spans almost 10 acres and in any given year, several million feet of tile are sold out of that location.

The yard is operated by five employees.

According to the company, all Prinsco pipe is engineered with integrity and known for its gold stripe, which is a visual reminder of their commitment to industry-leading quality. In addition, they take pride in a manufacturing process that includes onsite testing labs at all plants, engineered resin blending and a rigorous quality control process.

Vogel said the newest offering of agricultural pipe from Prinsco is the GOLDFLEX flexible dual-wall pipe.

GOLDFLEX features up to 60 percent faster installation, calls for less labor and equipment in the field, and is ideal for high water table areas.

“We have really hit a home run on that,” said Vogel.

According to the company, their goal is to be a leader in educating their customers, communities and world about the benefits of responsible water management and its role in feeding the world.

In order to achieve that goal, Prinsco has begun hosting remote classes, Vogel said where they are bringing in farmers and contractors and providing them with educational opportunities to learn more about agricultural tiling.

The company also offers several online videos for producers, landowners and contractors to go to for further information.

Agricultural tiling has been a large part of not only making farmland more productive over the last 100-plus years, but some may not realize what an important role it plays in water quality and soil health.

One of the biggest benefits to agricultural tile is the reduction in water run off after large rain events.

“When you have run off, it carries that top soil and fertilizers with it,” said Vogel.

Vogel said through studies with Iowa State University as well as universities in Minnesota and South Dakota, the benefits of tile on our land has shown great conservational benefits.

“We have done the studies and have seen how we are reducing nitrate loss,” he said. “Every tile system that is out there has a lot of benefits to it versus a non-tiled filed.”

Other benefits of installing field tile

A yield monitor in a farmer’s combine will sell more tile, Vogel said, than any salesman.

“The farmer can look at it and see where they exactly need tile,” he said. “And sometimes it’s in places where they didn’t think they needed it. That map will show you that you do need to tile.”

The 2018 growing season, Vogel said brought challenges due to the overly wet conditions that many producers experienced. Those, he said that had a proper tiling system didn’t experience as many of the challenges of those farming land that wasn’t properly tiled.

“This past year is a perfect example. As wet as it has been this past year, we saw farmers that were able to get into their fields early on, get their crop planted and sit back while the other guys across the road were not able to get planted,” he said. “The same thing happened at harvest. We saw guys able to get in there, get their crops out without getting their combine stuck, without getting their grain cart stuck while other guys did.”

Vogel said if a landowner or producer is interested in learning more about Prinsco tile, to contact them and they will send you in the right direction.

“We’ll get you connected with the right contractor in the area,” he said. “They will sit down with you and look at the systems available.”

“I think Prinsco will continue to grow,” said Vogel.

One area they have and will more than likely continue to see growth is in the replacement of large county mains.

“A lot of these county mains, I would say are over loaded,” he said. “As more tile gets put on these mains, farmers are seeing they just don’t have the capacity. We will be going beyond the field tile to fixing those mains. These mains are old and a lot of them are cement mains. They’re shallow and for the time they were installed they were fine. But over the years we have put so much on them.”

A prime example would be the new county main that was installed in Humboldt County in 2018. Vogel said Prinsco was a large supplier for that project supplying nearly 100 loads of 48, 42, 36 and 30-inch piping.

The future is also bright for Prinsco simply for the benefits agricultural tile brings to farmers in aiding them to be more productive, Vogel said.

“I think as farmers have more and more pressure to produce a crop and feed the world, they’re not making any more land, so we need to improve the land we have and that’s where Prinsco is going to be huge in the country for everybody,” he said.