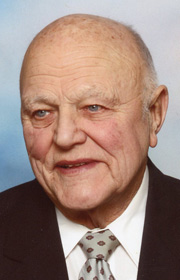 Richard was born February 25, 1932, in Fort Dodge, IA. He was the son of David and Francis (Peterson) Douglas.

Richard graduated from Fort Dodge High School in 1951. He served in the U.S. Air Force 133rd Aircraft Control and Warning Division as a radar operator from 1951-1953.

On March 20, 1955, Richard was united in marriage to Arlene Zierke. They made their home in Badger, IA. Over the course of the next 40 years, Richard worked as a master plumber and pipefitter. He owned and operated Douglas Plumbing and Heating from 1960-1970. In 1970, Richard joined the Plumbers and Steamfitters Union, Local 33, Des Moines, working many industrial jobs. In 1992, Richard went to work for Indian Hills Community College, managing their heating and cooling systems. He retired in 1994.

Richard was proud of his family and enjoyed many family activities, especially weekends at Dolliver Memorial Park and hosting Thanksgiving and Christmas family dinners.

Richard’s family remembers his hard working nature and energetic presence. He lived a Christian witness and loved his family.

Richard is preceded in death by his parents, David and Francis Douglas, his sister Constance (Robert) Brainerd and son Paul Douglas.

Services will be 11 a.m. Thursday, May 21, at Badger Lutheran Church. Interment will follow in North Lawn Cemetery, Fort Dodge. Military honors will be presented by V.F.W. Post No. 1856. Arrangements are entrusted to Gunderson Funeral Home & Cremation Services. All guidelines from the IDPH will be followed by Gunderson Funeral Home & Cremation Services. The use of face masks is encouraged.