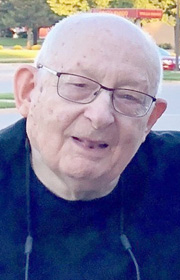 Francis Jimmy Gorman (Jim) was born April 2, 1933, in Lake City, Iowa. He was the youngest of five children born to Alvin L. Gorman and Elma Zane Gorman. With his wife and son at his side, on March 19, 2020, he left this world a peaceful and celebrated man. He took his last breath on a rainy Thursday at three-thirty in the afternoon in Ames, Iowa.

After a successful high school basketball career, Jim graduated from Otho High School in 1951. Due to an injury, he opted out of trying to play basketball for Iowa State University and took a job with Safeway in Fort Dodge, Iowa. He served in the United States Army from 1953-1955 during the Korean Conflict. He was proud to serve his country and was very adept in his many assignments.

Upon returning from the Service, Jim returned to Safeway where he met his life-long love, Barb. They were united in marriage on July 21, 1957, in Moorland Iowa. From this adoring couple came two children: Dorothy Rado of Brooksville, Florida, and James Gorman (Jimmy) of New York City.

Barb and Jim had a special love that was bonded in trust and commitment and they were married for 62 years. They were never apart throughout life and were true partners in everything they did. Never was there a more gentle and caring man that was completely committed to his family and friends. He attended all his kids’ sporting events and was always there for support — win or lose.

Jim worked in management at Safeway for twenty-five years. Instead of uprooting his family to move with the company, he took a job with the Jefferson Community School District as a custodian. This was perfect, as he worked in the same buildings as Barb. He continued at the school until his retirement.

Faith was a very integral part of the way Jim lived his life. He treated everyone with a gentle, Christian kindness and respect that was a trait of his own. He served God and the Jefferson United Methodist Church in many capacities. Barb and Jim have been members since they moved to town. He served on many committees, led Sunday School classes, ushered, greeted and most recently was to join the Finance Committee.

A family graveside service will be on Monday March 23, 2020, at Fulton Township Cemetery. A Celebration of Life and Funeral will be held at a later date.

Slininger-Schroeder Funeral Home in Jefferson is assisting the family. Online condolences may be left at www.sliningerschroeder.com