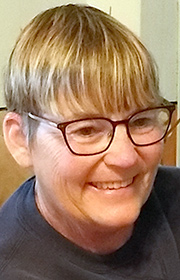 Memorial Services for Linda L. Compton, 65, of Fort Dodge will be Thursday, September 6, 2018 at 10:30 a.m. at Good Shepherd Lutheran Church in Fort Dodge with Rev. Nicholas Thackery officiating. Visitation will be Wednesday 1pm to 6pm at the Historic Bruce Funeral Home in Fort Dodge. Burial will be in North Lawn Cemetery.

Linda Lee Albrecht (Hicks) Compton was born March 14, 1953 in Ida Grove to Lloyd and Betty (Lamaak) Albrecht. After a brief move to Colorado, the family came to Fort Dodge where Linda graduated from Fort Dodge Senior High in 1971. Linda worked at Frigidaire for almost 12 years and at the Fort Dodge Labs for 28 years retiring in September of 2017. She married Brady Compton on March 8, 2003. Linda’s hobbies included traveling, camping, fishing, working in her garden, and sitting on the deck bird watching. She especially enjoyed spending time with the grandchildren and driving her convertible.

She was preceded in death by her father Lloyd Albrecht and father-in-law Phillip Compton and brother-in-law Bill Worden.

A Celebration of Life Benefit will continue as previously scheduled on September 22, 2018 at Rides Bar and Grill from 1:00 pm until 5:00 p.m.

Historic Bruce Funeral Home was entrusted with the arrangements. Online condolences may be directed to brucesfuneralhome.com