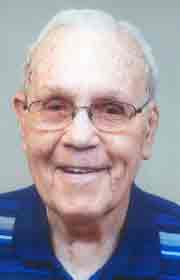 Donald was born October 25, 1922 in Denver, CO to Dorris (Rouse) and Herbert Henshaw, growing up in Herington, KS. He attended Kansas State University earning a Doctor of Veterinary Medicine. He served as a Captain in the U.S. Army in Germany. He then started his veterinary career in Minnesota and owned a large-animal practice in Columbus, WI for 12 years. Donald taught in the Veterinary School at Michigan State University, earning a Masters Degree in Animal Health. He worked for the USDA in Lincoln, NE before moving to Fort Dodge and continuing his career at Hormel and Iowa Beef.

Donald married Mary Kemnitz on May 12, 1956. They enjoyed antiquing, crossword puzzles, visiting family and wintering in Florida; she passed away in 2008. In 2010, he married Marilyn Harder and they became inseparable. He was a Lion’s Club and PICA member.

He lived life to the fullest as a humble servant and set a wonderful example for his family. He will be forever remembered for his faith, patience, kindness, love of family and endless questions!

In lieu of flowers, donations may be made to Beacon of Hope or PICA.