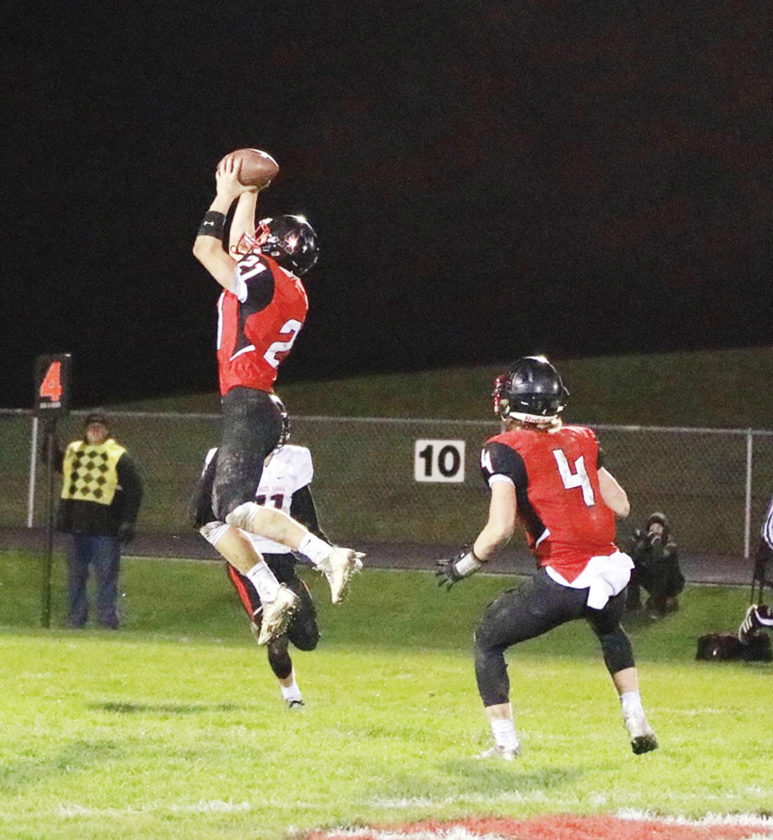 —Photo by Greg Grabanowski Algona’s Carson Devine goes up for the Bulldgos earlier this season. Algona will play in the quarterfinals on Friday night.

The Bulldogs (9-1 overall) will travel to face Waukon (9-1) in a Class 2A quarterfinal on Friday night.

This will be the third-ranked opponent for the Bulldogs, who have beaten qualifier Spirit Lake and lost to district champion Southeast Valley.

In the their opening round victory, Algona defeated Crestwood 45-20 behind 441 yards of total offense, 237 through the air and 204 on the ground.

“We settled down after the first quarter and finished well,” said Algona head coach Andy Jaccobson.

Wegener caught six balls for 219 yards and had three receiving touchdowns, with a long of 80. He also rushed for 61 yards and scored a touchdown.

Quarterback Matt Grein was 9-for-16 passing for 237 yards and four touchdowns. Carson Devine scored the other receiving touchdown.

Senior Jacob Durant rushed for 83 yards on 16 carries and had a 24-yard touchdown. Grein also rushed for a score.

Waukon, who has won nine straight games after dropping their season opener beat Union 40-11. The Indians have scored 376 points and only allowed 170.

“Waukon is a very physical team and their scheme is difficult,” Jacobson said. “We face quite the task heading there.”

Quarterback Creed Welch threw for 248 yards, including a 41-yard touchdown to Dawson Baures and a three-yard score to John Ronan. Baures rushed for 76 yards and three scores.

“They’re a good football team and it will be a challenge,” Jacobson said. “We have to continue to improve like we have all year and take care of the little things and take care of our assignments.”

“Baures is atough kid to defend,” Jacobson said. “They have a lot of other weapons and good job of spreading the ball around.”

Welch has thrown for 1,988 yards on the season and 25 touchdowns.

Grein, who is the fifth leading passer in Class 5A has thrown for 2,033 yards and 26 touchdowns.

On the ground, the Bulldogs have three backs, who have ran for over 500 yards.

Jacob Durant has been the groundhog, rushing for 1,221 yards on 170 carries and 12 scores. Wegener has 683 yards and 12 scores, while Groen has 548 and six touchdowns. Grein has rushed for four touchdowns.